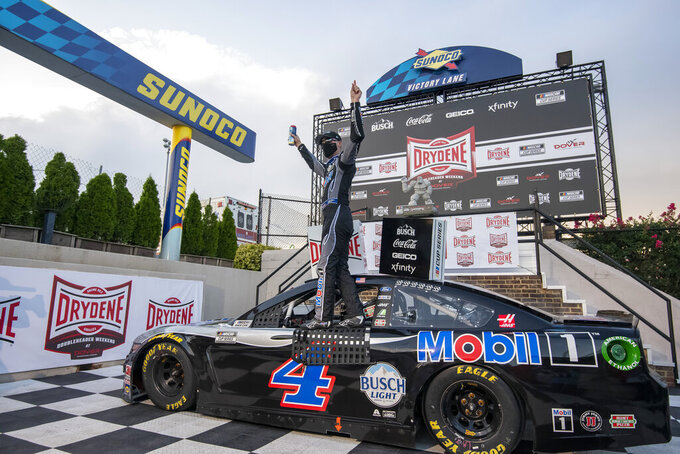 Kevin Harvick and Denny Hamlin are expected to race head-to-head for the NASCAR Cup title when the 10-week playoff series begin Sunday at Darlington Raceway.

The duo heads to the South Carolina track with a combined 13 regular-season wins between them — they each won a race at Darlington in May when racing resumed during the coronavirus pandemic — and they've accumulated enough playoff points to practically coast into the championship-deciding finale. That theoretically leaves the 14 other drivers racing for just two spots in the winner-take-all race.

“I met with my team and I told them at the end of this 10 weeks someone will be holding the championship trophy. Why not us?” said Brad Keselowski. “We can do it just as well as anybody and I’m ready for that challenge.”

The field consists of six former champions including Kyle Busch, the current holder of the Bill France Cup. Busch is a two-time Cup champion but has had a terrible 2020 by his standards and is still seeking his first win of the season.

“Certainly we’re not a title front-runner, we’re not a favorite,” Busch said. “We are on the bottom of the spectrum and we’re on the outside looking in.”

At stake is a winning streak of at least one victory a year since his 2005 rookie season, a source of pride for Busch and one his Joe Gibbs Racing team doesn't want to end.

“It’s a 16-year investment that we’ve placed on being able to win a race in 16 consecutive seasons, so hopefully we can keep that going,” Busch said. "This year has definitely been one of the biggest tests I feel like I’ve been through. It’s been nothing but something else that’s in the back of your mind like, what’s going to happen next? What’s the next thing that’s going to test your patience?

“Just seems like we can’t shake this monkey off our back. Wherever he is, whatever he looks like, somebody tell me and we’re going to go for a few roll-arounds here and get him off my back in order go out here and have a solid, successful, productive final 10 weeks.”

The field is a mixed lot of experience, with Cole Custer the only rookie to make the playoffs while Matt DiBenedetto is making his first appearance. NASCAR's return to racing has been done with COVID-19 protocols that eliminated practice and qualifying, which put younger drivers and smaller teams at a disadvantage.

Custer, for example, is 22 years old and has raced the tricky Darlington track just five times before — only twice in a Cup car, both in May. Harvick, conversely, has 25 career Cup starts at Darlington and a pair of wins.

“I think I would definitely like some practice,” Custer said. “Even though we’ve been to tracks like Darlington before, some of these guys have been there for 10 or 15 years. There’s stuff as a rookie that we’d just like to try in our car to see if it was better or worse, but we don’t really have that opportunity, so we make our best educated guess.”

The playoffs are split into three rounds of three races each, with four drivers eliminated after each round. A victory in any round earns an automatic advancement into the next round until the field is whittled down to four for a Nov. 8 shootout at Phoenix Raceway.

Busch joins his older brother, Kurt, Aric Almirola, Clint Bowyer and DiBenedetto as drivers without a win as the playoffs begin. Keselowski, with three victories, is the only driver who has come close to keeping pace with Harvick and Hamlin, while Joey Logano and Chase Elliott have two wins each. Logano won twice in the first four weeks of the season, while Elliott scored his two wins after racing resumed.

Martin Truex Jr., Ryan Blaney, Alex Bowman, William Byron, Austin Dillon and Custer each have one victory. Truex, though, has only finished lower than fourth one time in the last 10 races and might be the overlooked contender. Others have been labeled dark horses, but Truex has very quietly made himself a strong challenger to Harvick and Hamlin.

“I feel like we are right there on the cusp of it. You look at what we’ve done the last 10 races,” Truex said. “We’ve had opportunities to win slip away. I look forward to seeing if we can take those seconds, thirds and fourths and turn them into wins. That’s ultimately what it takes to win the championship.”