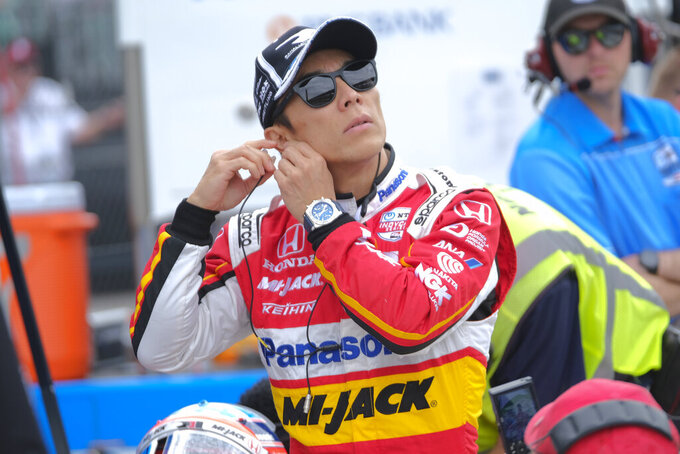 Takuma Sato, of Japan, prepares to drive during practice for the Indianapolis 500 IndyCar auto race at Indianapolis Motor Speedway, Friday, May 17, 2019 in Indianapolis. (AP Photo/AJ Mast)

Like most aspiring broadcasters of his era, Mike Tirico remembers tuning into ABC every Saturday to watch Wide World of Sports, listening in rapt attention to the dulcet tones of Jim McKay.

"It was Channel 7 back in New York," Tirico recalled fondly, "and this was a time that was almost unfathomable — pre-cable, no internet. Wide World of Sports shrunk the world. It took you everywhere."

One of the places was the Indianapolis 500.

Tirico would watch A.J. Foyt and the Unser brothers and the rest of those famous daredevils as they pushed their cars to the limit at the Brickyard. McKay would provide the soundtrack, right along with the roar of the engines, of a spectacle that Tirico remembers vividly all these years later.

After airing every Indy 500 from 1965 through last season, ABC was outbid for the rights by NBC, giving the network exclusivity over the IndyCar Series. And that means Tirico, who spent 25 years with ESPN before heading to NBC in 2016, will host the broadcast Sunday alongside Danica Patrick and a host of other celebrities, analysts and reporters.

"It was the one race as a family we'd sit down and watch, and now knowing people will be doing that at home, it gives me a chill," Tirico said. "Just seeing with my own eyes what I've seen for years on TV, it's hard to imagine all those seats being full, as far as the eye can see."

The Indy 500 falls within a busy three months for Tirico, beginning with the Masters and including the Stanley Cup Final, horse racing's Triple Crown and the French Open in Paris.

Asked where it ranks among those signature events, Tirico said right at the top.

"When I got hired here," he said, "three of the things I talked about that I had never done in the business were the Kentucky Derby, the Olympics and the Indy 500. When they asked me if I would be host, that really does complete the list of significant sporting events I've wanted to go to."

The trick now for Tirico — and NBC, for that matter — is to push the broadcast forward while still respecting the traditions that became ingrained on ABC over the years.

Already, the network has poured massive resources into promoting the event.

Television spots have been airing since mid-January, often during other major events such as the derby and the NHL playoffs. The "Today" show will air from the speedway Thursday with Tom Hanks as a guest host. The production will include roughly 400 crew members, more than a dozen commentators and analysts, and cameras positioned just about everywhere within the 560-acre speedway and its famous 2.5-mile (4.02-kilometer) oval.

"The live event is the centerpiece, the place everyone wants to be," said Sam Flood, who will produce the broadcast. "We want people at home watching to say, 'Next year, I have to be there.' We're treating this like an event, not just a race. I think that's really important."

Flood said the goal is to draw in casual viewers who may not watch IndyCar races on a regular basis, and that means unique storytelling elements. The network already has done a documentary on Mario Andretti, who is celebrating the 50th anniversary of his lone Indy 500 victory, and there are pieces in the works about the drivers, their teams and even where the milk comes from for victory lane.

"It's exposing the sport beyond the confines of racing," Flood said.

That is crucial for the network, which is trying to turn around a steady drop in ratings that dates to the 2015 race. There were 6.5 million viewers that year, but that number had fallen 20 percent to 4.9 million last year, when Will Power made a pass in the closing laps to win the race.

Flood thinks the fact that all IndyCar races are now carried by one network will help matters; NBC Sports only had cable rights under the previous deal, while ABC had the network broadcast rights.

Two weeks ago, the IndyCar Grand Prix on the road course at Indianapolis Motor Speedway drew an audience of nearly 1.1 million viewers. That made the rain-soaked race won by Simon Pagenaud the most watched Grand Prix in five years and represented a 37 percent increase over last year.

"As a viewer, watching the entirety of it, you should hopefully get a feel for the heroes, the villains, the underdogs, favorites. It will give you someone to cheer for," said Patrick, who launched her career with a fourth-place finish in 2005, and was third in the race four years later.

Patrick, who also ran last year in her farewell to racing, was tapped to provide an insider's look at the race. And while she is a relative novice when it comes to broadcasting, her penchant for saying whatever is on her mind makes her an intriguing part of the team.

"I do carry some non-rookie stripes. I hope that's part of the broadcast that I can include that will be insightful and interesting and good for the viewers," she said. "When I come to the track, I drive through the tunnel, I come in, I can see the pagoda. I can feel the track. It's like an entity for me."

Dale Earnhardt Jr. will continue his trek through NBC's portfolio of big events by providing his "everyman" opinions. Leigh Diffy will call the race itself alongside former drivers Townsend Bell and Paul Tracy, while Marty Snider and others serve as pit reporters and analysts.

"Al Michaels hosted a couple times for ABC," Tirico said, "and he told me, 'Just be sure you're somewhere near the pits and have your earpiece out and just experience the roar of the engines when the 33 cars come to take the green flag. There's nothing like it in sports.' And after all these years, we are going to be in a really good spot to experience that when the race starts."