NASCAR set for Homestead, while Wallace watches from afar 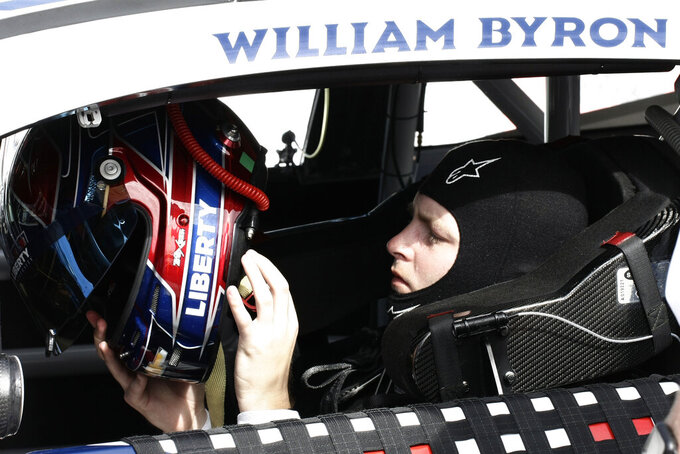 HOMESTEAD, Fla. (AP) — Bubba Wallace is missing Sunday’s NASCAR race, and that’s evidently not his only sanction after losing his cool in Las Vegas last weekend.

Denny Hamlin — who, along with Michael Jordan, co-owns the 23XI racing team that Wallace drives for — said Saturday that the team has dealt with matters in a way that goes “above and beyond” the penalties handed down by NASCAR.

Hamlin didn’t say what that means, choosing to keep those matters in-house.

“He understands where I stand, where the team stands, the values that we want to present on the racetrack, and he just didn’t represent it that well last week,” Hamlin said. “But, you know, in the grand scheme of things, we’re very happy with his progress. And he knows he’s still got some stuff to work on when he gets out of the race car.”

It’s not just Wallace in the spotlight right now.

Two weeks ago, NASCAR issued $200,000 in fines after finding that Stewart-Haas Racing driver Cole Custer slowed on the backstretch of the final lap of a race in Charlotte and helped teammate Chase Briscoe move up enough to reach the next round of the playoffs. Custer and his crew chief, Mike Shiplett, were both fined $100,000 after NASCAR determined Custer’s slowdown was deliberate.

And last week, Wallace intentionally wrecked reigning Cup champion Kyle Larson at Las Vegas in a dangerous act of retaliation. Wallace got suspended for this week at Homestead-Miami, and playoff contender Christopher Bell got caught up in that wreck — smashing his car and denting his chances of becoming NASCAR champion. Bell remains in the playoffs, but needs to rally.

“NASCAR’s like your parents a lot of times,” playoff leader and title contender Joey Logano said. “There’s a line of, you know, you’ve got to let the boys figure it out sometimes, and they’ll figure it out together and move on — or mom and dad has to step in a little bit and control the situation because it’s gotten out of hand. So, I believe NASCAR kind of decided it’s getting out of hand.”

Drivers tended to agree with NASCAR on these calls.

“In my opinion, those moves were extremely, extremely dumb — both of them,” driver Daniel Suarez said of the decisions made by Custer and Wallace. “And with both of them, I was going to be extremely surprised if they were not penalties. ... You have to be smarter. I don’t know what those guys were thinking.”

That question — “what was he thinking?” — has been a storyline for much of this NASCAR season, with no shortage of temper-flaring incidents.

Ross Chastain, who has had a big first season for Trackhouse Racing, has been featured prominently in a few of those. He has clashed with Hamlin, had a starring role in a wreck that put a good dent in Kevin Harvick’s title chances, and his name was converted to a verb by Kyle Busch. Getting wrecked by Chastain is now, in NASCAR parlance, getting “Chastained.”

“Look, some of the things I did throughout the summer were just not ... looking back, I would do them different,” Chastain said. “Some of it would just be my stance after the race. I would prefer it be different. But a lot of on-track stuff, I could definitely clean up.”

Wallace isn’t at Homestead this weekend, even to watch. He’ll be in the team garage, and Logano said he doesn’t think Wallace owes his fellow drivers an explanation.

William Byron’s playoff push will start from the ideal spot Sunday. He won the pole in Saturday’s qualifying laps at Homestead-Miami, turning in a lap of 32.454 seconds.

That was 0.049 seconds ahead of fellow playoff entrant Bell. Another driver still in the playoff, Chase Elliott, will start third.

“Anywhere in that top 10 is a good place to start here,” said Byron, who got the first pole of his season and the eighth of his career.

Among the other drivers still in the playoff: Ryan Blaney will start 13th, Hamlin 14th, Logano 17th, Briscoe 19th and Chastain 20th.

Most drivers don’t expect to see much correlation between qualifying and what’ll happen over 267 laps on Sunday.

“The car drives tremendously different and the lines are different around the racetrack, too,” Bell said. “It’s completely two different animals.”

Suarez is from Mexico, not Miami, but he feels the comforts of home this weekend in a place where most people speak at least some Spanish and the Latin flavor is just about everywhere.

“Everything starts, I would say, driving to the racetrack,” Suarez said. “If you turn on the radio and you start flipping stations, everything is in Spanish. Then we get to the racetrack and most of the security people speak Spanish. So, the energy just feels different, and they make me feel like home. And that feels very amazing.”

It’s not uncommon for Suarez to go to tracks and hear plenty of Spanish — he cited Texas and “every single race on the West Coast” as such locales.

“I really feel more like home in coming to places like this,” Suarez said. “And I know that there are going to be a lot of fans speaking to me in Spanish and bringing some Mexican flags. We have a lot of support and that is something that I really enjoy a lot.”