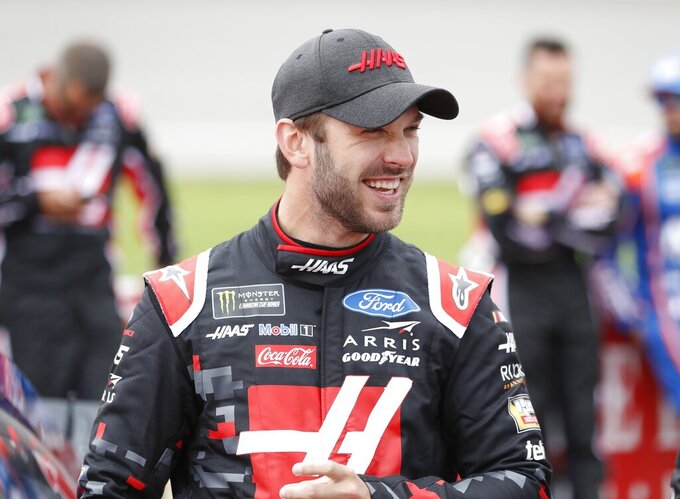 FILE - Daniel Suarez stands next to his car before a NASCAR cup series auto race at Michigan International Speedway in Brooklyn, Mich. in this Monday, June 10, 2019, file photo. New NASCAR team Trackhouse Racing has brought entertainer Pitbull on as an ownership partner for an organization making its debut next month at the Daytona 500. Trackhouse was launched late last year by former driver Justin Marks. The team has hired driver Daniel Suarez. It will not be NASCAR’s first pairing of a Hispanic driver and team owner. (AP Photo/Carlos Osorio, File)

Pitbull has become an ownership partner in new NASCAR team Trackhouse Racing, set to make its debut next month at the Daytona 500.

Trackhouse made the Friday announcement with a video on Twitter in which the Grammy winner is featured dancing to an “I believe we will win” chant. He also holds signs that say: “Knuckle Up, Fight Hard. Buckle Up. Fight hard.”

The platinum-selling rapper, known also as “Mr. Worldwide,” joins NBA Hall of Famer Michael Jordan as celebrity owners entering NASCAR this year. Jordan is a part owner of 23XI Racing with Denny Hamlin, which has Bubba Wallace in the No. 23 Toyota this year.

“I’ve been a fan of the NASCAR story since the movie ‘Days of Thunder,’” Pitbull said in a statement. “We are going to show the world NASCAR is not only a sport but a culture.”

Pitbull noted the announcement coincided with his 40th birthday on Friday: “So get ready! Dale! (Dah-lay)” he ended with his signature tagline that translates to “Let’s go!”

Trackhouse was launched late last year by former driver Justin Marks, who struggled to find a charter that guarantees entry into every Cup Series race on the schedule. He ultimately leased one from Spire Motorsports to get his organization on the grid but has vowed to purchase a charter and make Trackhouse a NASCAR fixture.

Marks hopes to eventually base Trackhouse in Nashville, Tennessee, as part of a multi-use entertainment complex. The team in its first season has an embedded operational alliance with Richard Childress Racing.

“NASCAR racing is about pushing boundaries; for the Trackhouse Racing team, that means more than just winning on the race track,” Marks said. “It means winning in America's communities, empowering our youth, giving a voice to the unheard and impacting all races on and off the racetrack.”

The team has hired Daniel Suarez to drive the No. 99 Chevrolet. Suarez is Mexican and Pitbull is Cuban-American, but it will not be NASCAR’s first pairing of a Latino driver and team owner: Juan Pablo Montoya, a Colombian, drove for Chip Ganassi Racing when it was part owned by Felix Sabates, a Cuban.

NASCAR welcomed the addition of Pitbull, who performed for fans in a pre-race concert at Phoenix Raceway last March in the last race held before the pandemic.

“Pitbull is an iconic talent in the music industry and has tremendous passion for NASCAR racing. We look forward to working with him to further engage diverse audiences and introduce new fans to our great sport," the series said.