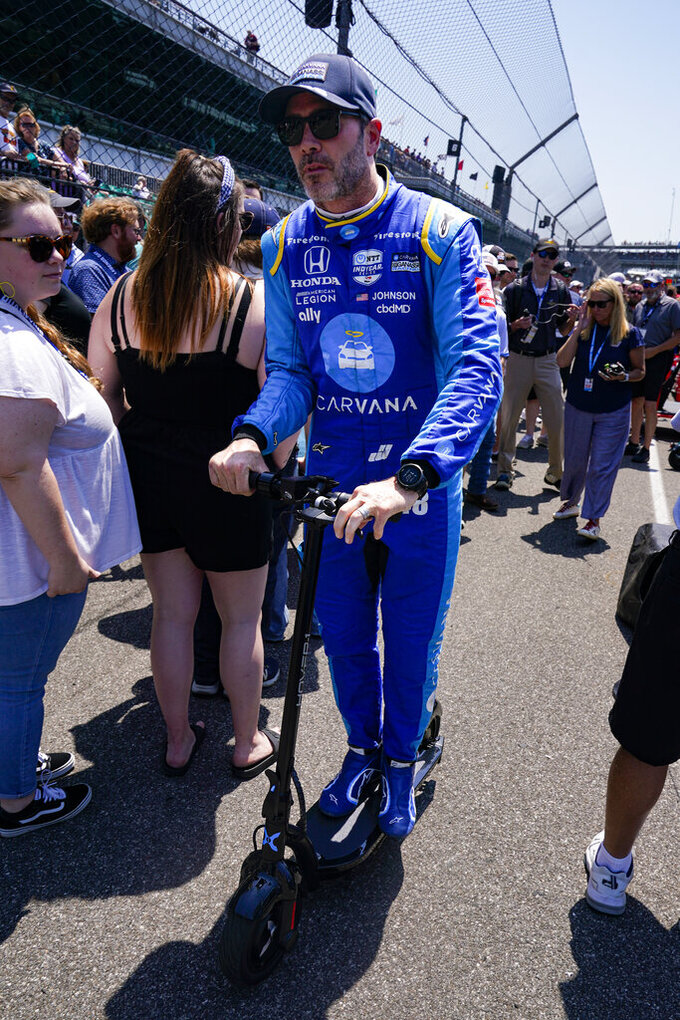 Jimmie Johnson rides his scooter out of the pit area during practice for the IndyCar auto race at Indianapolis Motor Speedway in Indianapolis, Friday, May 20, 2022. (AP Photo/Michael Conroy)

INDIANAPOLIS (AP) — Takuma Sato was the fastest driver at Indianapolis Motor Speedway before IndyCar drivers were given some extra boost for Friday's practice.

He was even quicker afterward — despite the incredibly gusty winds.

The two-time Indianapolis 500 winner from Japan finished atop the speed chart for the third consecutive day with the fastest lap of the week at 232.789 mph.

“All day long and all week, turn three is the one I felt was a bit different from last year,” Sato said. “Until yesterday, it was puzzling, but I think the track is very consistent so I think that's good.”

Sato is attempting to win his third 500 with a third team. His first win, in 2017, came with Andretti Autosport. He won the 2020 race with Rahal Lanigan Letterman Racing and this year is driving for Dale Coyne Racing.

Alexander Rossi, the 2016 race winner, posted the second-best lap at 231.883 and Pato O'Ward of Mexico was third at 231.788. O'Ward had the top Chevrolet in the final six-hour practice session before qualifying begins Saturday. The pole shootout will be held Sunday with the biggest race of the IndyCar season scheduled for May 29.

The tricky weather, a squirrel — and an additional boost of about 90 horsepower — didn't make for a traditional Fast Friday.

While all 33 drivers turned laps, nobody did more work than American rookie David Malukas, Sato's teammate. Malukas logged 39 laps and finished seventh at 231.414.

“I think we’re maybe a little bit under the radar,” Malukas said, referring to Coyne's team. ”I wasn’t really expecting anything like this. Whatever way it goes, I’m just happy. I have Takuma Sato as my teammate and I’m driving an Indy car at Indianapolis Motor Speedway, and we’re quick. If you were to tell me that as a kid, I’d be pinching myself to wake up.”

Penske President Tim Cindric will be watching two races May 29: the 500 and the Coca-Cola 600.

Whether he'll attend both will be determined on race day.

Cindric said one of his sons is planning to fly from Norway to Indianapolis for the race and that he plans to play his customary role as Newgarden's race strategist. At least one of them will then fly to Charlotte, North Carolina, where Austin Cindric will be competing.

“Am I doing the double?” Cindric asked, repeating the question. “I never know until after it’s all over. It depends on how the first one goes.”

Johnson's father, Gary, has been a big hit as the third turn spotter for the No. 48 car this week.

But as Johnson, a four-time Brickyard 400 champ, has relearned his way around the track in the faster, lighter cars, his father has become an even bigger fan of the IndyCar Series.

“That’s my dad. He loves to smile and have a great time,” Johnson said. “Growing up we just knew of IndyCar — NASCAR was so far away. My grandfather was a huge (A.J.) Foyt fan. So absolutely he’s star struck, and I get it. I’ve been that way myself.”

Four engineers who helped create a two-way communication system to transmit safety information and data to IndyCar drivers were selected as winners of the Louis Schwitzer Award.

Luca De Angelis, Luca Pierrettori, Taylor Paschka and Simone Pusca received the $10,000 prize for developing the EM Marshalling System. The award is presented by BorgWarner and the Indiana Section of the Society of Automotive Engineers.