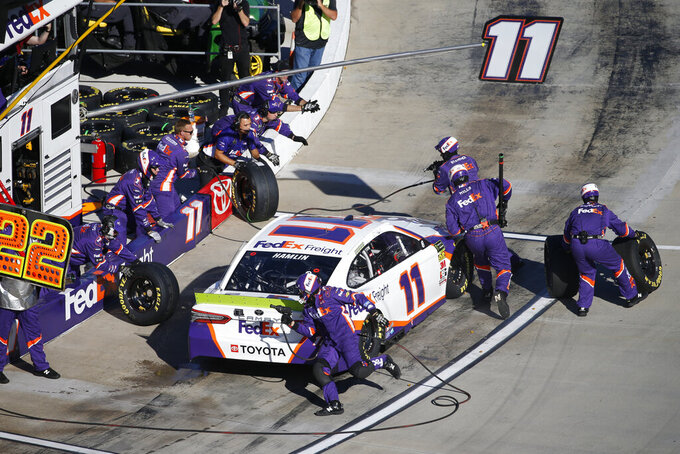 Chase Elliott has fast cars but awful luck, while Kevin Harvick has barely made a whisper in the playoffs. Ryan Blaney continues to rise on NASCAR's biggest stage and Kyle Larson escaped Martinsville Speedway, his worst track in this third round of the playoffs, as best he could.

It was a lot of drama despite a snoozer of a Sunday on NASCAR's shortest track.

Martin Truex Jr. led 464 of the 500 laps to collect his series-best seventh win of the season. This one locked him into the final four and the right to race for the championship next month, something Truex fully believed possible when he and crew chief Cole Pearn needed a new home after Furniture Row Racing closed after last year's season finale.

The move inside Joe Gibbs Racing has been tremendously successful, even if Truex and the No. 19 team have been overshadowed by everything, specifically teammates Busch and Hamlin.

"I wouldn't have went (to JGR) if I didn't think I could win a championship," Truex said. "I would have retired."

Give Truex and Pearn some credit for the clinic they put on at Martinsville, where the combination of NASCAR's new rules package and the Goodyear tire selection resulted in lousy racing in which one car can run away with the race. There were three total lead changes and a clear difficulty for drivers to pass, which sapped any on-track excitement from the opening race of the round of eight. But the frustration was boiling through the field for 500 laps and it exploded with a postrace, pit road fracas in which Hamlin was hurled to the ground by a member of Logano's crew.

Logano was upset that Hamlin had squeezed him into the wall during the third stage of the race and the incident led to a cut tire that contributed to the reigning champion's eighth-place finish. Logano won at Martinsville last year to spark his upset championship victory three weeks later.

Admittedly unsatisfied with Hamlin's response, Logano smacked Hamlin on the shoulder and turned to walk away. Hamlin took exception and chased after Logano, who was aggressively shielded by everyone at Team Penske ranging from his crew chief to his publicist and an overzealous crew member who horse-collared Hamlin to the ground in a brief, chaotic scrum. A day later, NASCAR suspended Dave Nichols Jr., the tire technician who knocked down Hamlin, for this weekend's race at Texas.

Martinsville's half-mile layout makes it a tight little track and the fans were close enough to see all this unfold right in front of them. Hamlin, a Virginia native and five-time Martinsville winner, played to the fans when he mocked Logano with an impersonation during his postrace interview shown on the big screen that brought the crowd to its feet.

He loved every minute of it, even though he finished fourth and it was his teammate now locked into the finale at Homestead. Hamlin doesn't seem to have a care in the world right now.

The same can't be said for Busch, the regular-season champion and Gibbs' title favorite not too long ago.

Busch's magical season has fallen apart and his title chances are slipping away. He finished 14th at Martinsville, lowest of the title contenders aside from Elliott, who was 36th with a mechanical failure. Busch has not won a Cup Series race since June 2 at Pocono and he has been all over the map in what has to be an exasperating playoffs for the ultra-competitive driver.

On the surface, Busch has appeared cranky for weeks. In reality, he is just being unpleasantly honest about his view on NASCAR's new rules and belief that the best team probably won't win the championship.

Gibbs is in a difficult spot: One of his drivers is locked into the final four, but two others still need a spot and he knows something is off right now with Busch. It's impossible to deny after a weekend in which Todd Gilliland, winner of his first career Truck Series race driving for Kyle Busch Motorsports, used an expletive when he radioed for Busch to stay in his motorhome rather than come to victory lane. And that was a day before Busch was a pingpong ball all over the track at Martinsville; after tangling with him, Aric Almirola vowed to make the final three races "hell" for Busch.

Busch would race everything every weekend if he could, but NASCAR rules have limited him to seven races in the Xfinity Series and five in his trucks. He won all five Truck Series races he entered and four of seven in Xfinity.

"You want me to evaluate Kyle's makeup or what?" Gibbs said Sunday about his mercurial talent. "One thing is for sure, I'm not sure we can analyze that, OK? I would say this to you: Think about his whole life. He's got (wife) Sam and (son) Brexton, but other than that, it's racing. And when something goes bad in racing for him, think about how important that is, and it upsets him. Normally the next day he's a lot better at the race shop and everything, but I think this has been a tough stretch for him."

For such a boring race, the playoff contenders were scrapping for every point on every lap as the tension has hit heights not seen in years in NASCAR. Truex, so comfortable and confident, afterward couldn't even describe it.

"It's hard to explain. It's hard to feel what guys are putting on the line and how hard they're driving their cars," he said. "I just feel like every year I've been in this playoff format it's gotten more difficult. It just seems like every year, somehow people turn up the intensity even more, and I don't know how that's possible. There's a lot more on the line."