Colton Herta looks for redemption in return to Music City 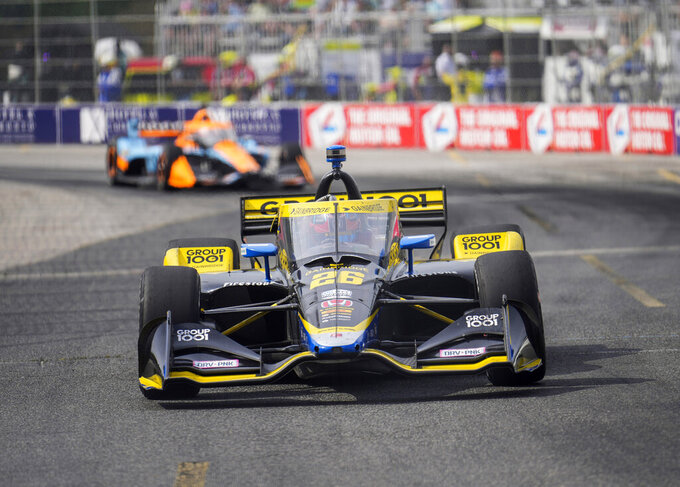 NASHVILLE, Tenn. (AP) — Colton Herta always wanted to be a racecar driver and pursuing his passion came with parental conditions, among them the insistence he learn to play a musical instrument.

“I chose piano at first and I hated it, so I started playing drums when I was like 11 or 12, off and on until the last few years,” Herta said.

That hobby has blossomed into a second passion and the 22-year-old Herta is now the star of a four-man punk rock band. The Zibs have an album and gone on a short tour, but gigs are harder to schedule because the childhood bandmates are either attending college or pursuing their own careers.

For Herta that means a packed IndyCar schedule of 17 races across the country, testing, appearances and his quest to move to Formula One. But for one night only last week in Indianapolis, the Zibs reconvened — kind of — for a gig at one of the city's oldest bars.

The Zibs were down two band members, called in a replacement bassist, and rocked out a set at the Melody Inn on its weekly punk night. Herta opened the show with a drum solo but still looked every part the racer: Herta wore a plain gray shirt with the Castrol oil logo, and a black Fluid Logic baseball cap that represented the cooling system he uses when he drives.

“I had so much fun. Melody Inn is an awesome place, especially for punk music,” Herta said. “We haven’t played for like a year, but before that quite a bit. But it’s just gotten so hectic because they’re all at school, and I’m doing my thing, so it’s hard to get together and play.”

The bars will be jammed with all kinds of aspiring artists this weekend when IndyCar's returns to Nashville for the Music City Grand Prix, the second-year street course race run through the area. But scheduling a gig was not an option for Herta, who is far too focused on amending his loss in last year's race.

He had the best car in the field in last year's inaugural race. Herta was fastest in both practice sessions, won the pole in qualifying and led a race-high 39 of the 80 laps before a series of mistakes doomed his win. Herta had worked his way back into contention and was challenging eventual winner Marcus Ericsson for the lead when he made his final mistake and crashed with five laps remaining.

“Nashville, that went — I don’t want to talk about that one, but we were fast there,” he said.

Because he and Andretti Autosport have been inconsistent this season — Herta led 17 laps last week at Indy before a mechanical failure ended his race, and he has just one victory and is ranked a career-low 10th in the standings — he's aiming to complete a clean race and get the win that got away last season.

“Realistically, we’re not going to win the championship. It’s too far out of reach,” Herta said. “I’ll just kind of use the end of this season to focus on the next season and kind of butt through it. Just try to get those top-fives every single race.”

This year, he plans to hang around Music City a few days after Sunday's race and soak in all the attractions.

“Last year, I really didn’t get any time to explore Nashville. I had never been there before,” he said. “This time, I’ll do it properly and I’ll get to go see everything.”