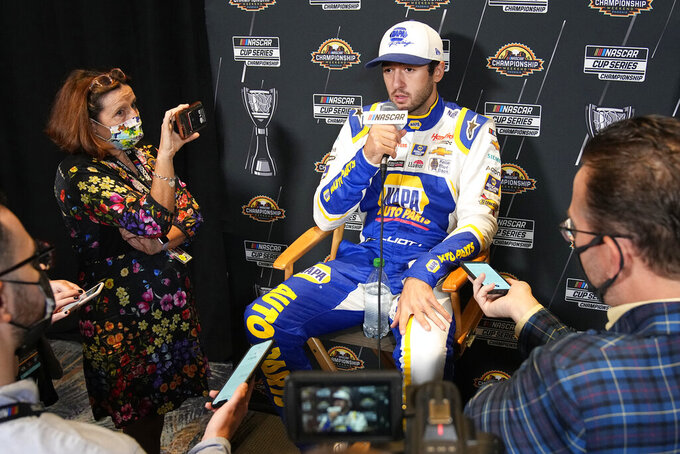 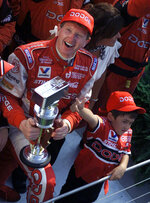 PHOENIX (AP) — Chase Elliott was supposed to be the star during his season as both NASCAR’s reigning champion and its most popular driver.

He wasn’t even the top guy at his own organization.

Beat all season by Hendrick Motorsports newcomer Kyle Larson, Elliott gets a final shot Sunday to defend his run as NASCAR's champ. The star teammates are trying this weekend to emerge as the best in NASCAR — and earn bragging rights at Hendrick — as they race for the championship at Phoenix Raceway in a winner-take-all finale.

Yes, Joe Gibbs Racing teammates Denny Hamlin and Martin Truex Jr. also are in the final four. But who comes out as the top dog at Hendrick, winner of 16 races this year and NASCAR's winningest team, is one of the more intriguing layers of the first sold-out finale since the race moved to Phoenix last year.

Elliott last season not only advanced to his first championship race, but he then won the whole thing to earn Hendrick its first championship since Jimmie Johnson's record-tying seventh in 2016. But the No. 9 team got hot late in the playoff stretch and won three of the last five races, including the Phoenix finale under a format that rewards late-season success.

This year, Hendrick Motorsports has won 16 of 35 races, nine from Larson in his NASCAR comeback. Elliott has won two races, and it was team boss Rick Hendrick who just this week used victory totals ( Hendrick driver Alex Bowman four wins; Hamlin two for Gibbs ) when asked for response to Hamlin calling Bowman “a hack.”

That would put Larson up 9-2 over Elliott in Hendrick's eyes, no? Surely that must gnaw at Elliott, who now could lose his Cup reign a day short of a full year as champion.

“There’s definitely been a few races this year where it’s like, ‘Wow, my cheers were louder than Chase.’ That’s really cool,” Larson told The Associated Press. He also joked “maybe I could beat him in the most popular driver award.”

But he said because Elliott lives in Georgia, and NASCAR has held mostly one-day shows this season with little to no mingling between teams, Larson said he's yet to build a real off-track relationship with his new teammate. Larson said their paths probably only cross once a month, in hourlong competition meetings where racing is the sole conversation.

“I feel like with Chase, what you see is what you get. He’s just quiet and keeps to himself, and I appreciate that side of him,” Larson told AP.

Elliott has been much more visible the last two months, ripping off witty one-liners and refusing to back down in a feud with tough guy Kevin Harvick. He got the final move when Harvick wrecked himself out of the playoffs as Elliott closed on his bumper, clearly in Harvick's head, and then Elliott inspired a kitschy T-shirt line when he wished Harvick a “merry offseason and Happy Christmas."

Just last week, Hamlin criticized Elliott's rabid fanbase and Elliott responded with faux care about anything said by Hamlin. Awesome Bill's fans were intense, too, and Elliott's father won the most popular fan vote a record 16 times until Bill Elliott asked to come off the ballot following his 2002 win.

Chase Elliott is a purist, like his dad. The code he believes in rewards the best of the best, and if that's Larson, then Elliott knows the No. 5 team earned it.

“Look, when people set out to go race and you do a good job, and you execute races well, and you don’t make many mistakes, you should be rewarded for it,” Elliott said inside the Phoenix convention center, which sat shadowed by his photo holding the Cup draped off the side of an overhead building.

“I’m not ever going to knock somebody for doing a good job behind the wheel, or on the pit box, or on pit road," he said. "When you do a good job, you should be rewarded for it, and rightfully so.”

Hendrick hyped this lineup of Elliott and Larson, Bowman and William Byron, as good as any in Hendrick Motorsports history. And that place ran roughshod through the sport by winning 13 championships with Jeff Gordon, Terry Labonte and Johnson, all of them over a 25-year span.

But this lineup has weathered a rebuild and Elliott put Hendrick Motorsports back atop the sport last season after a three-year drought. Larson has been the final piece of Hendrick's plan, and if there was any internal discord, this organization would not have run all over the competition, put all four drivers into the second round of the playoffs and two into the final four.

“Chase is very competitive. He wants to win,” Hendrick said “But he’s happy for the organization. He’s never said anything about the fact that he won the championship, and now Kyle’s winning a bunch of races.”

Besides, Hendrick said, there's still one race that will decide it all.

“It all comes down to Sunday. He's in it to win it," Hendrick said of Elliott. “He’s got a chance and a good shot at being a back-to-back champion.”

Hendrick praised Elliott's maturity, which he likened to a veteran with experience twice his six years in Cup. Elliott, who turns 26 later this month, texts Hendrick congratulations after every Larson victory and Hendrick said he's never run “off in a corner and says, ‘I need what they have.'" about his rival from within.

Hendrick has seen it come down to the wire between his own drivers before, with Gordon and Labonte in early battles, then Gordon and Johnson, and he seemed to think Elliott has the edge. Hendrick knows Elliott well — he signed him to a development deal when Elliott was 14 — and finds him unflappable, his more outspoken nature the last two months no surprise because Elliott is “quick-witted,” “sharp” and “just a super bright guy.”

“You can’t rattle him. I’ve never seen him get rattled over anything,” said Hendrick. “I think he’s poised for another championship here come Sunday.”