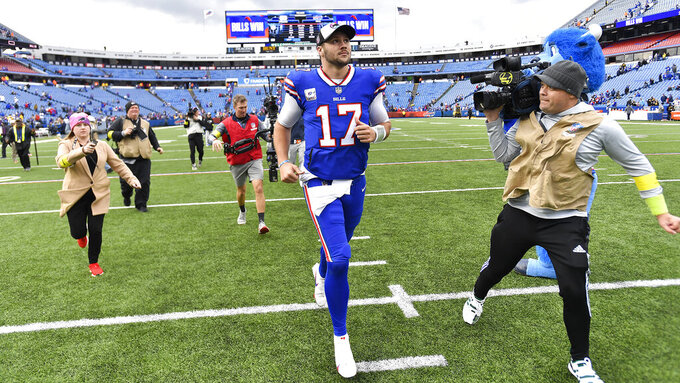 KANSAS CITY, Mo. (AP) — The previous time Patrick Mahomes and Josh Allen saw each other in the heat of competition wasn't at Arrowhead Stadium during their epic January playoff game, when the Chiefs quarterback rallied past Allen and his Bills for an overtime victory and a return to the AFC title game.

In fact, it wasn't on a football field at all.

And both turned out to be losers.

It happened in June, when the uber-competitive QBs teamed up against Aaron Rodgers and Tom Brady in a match-play event in Las Vegas. Mahomes and Allen led after the first eight holes in the 12-hole exhibition, only to watch as Brady tied it up at the 10th and Rodgers walked in a winning birdie putt on the final hole.

It was the latest example of their burgeoning friendship, which also happens to be one of the NFL's best new rivalries, one that will be renewed when the Bills visit the Chiefs on Sunday.

“Josh is a great guy. He's a great quarterback — physically talented, he can throw, can run. He can really do it all,” Mahomes said. “But he's a great dude, too. And so obviously when we're on the football field, we're competing against each other and we want to beat each other's teams, but I have a ton of respect for him, the player and person he is.”

Mahomes has won three of their four matchups, including the two that mattered the most: That divisional round win in January, when the teams combined for 25 points in the final two minutes of regulation before Kansas City won in overtime, and the AFC championship game in the 2020 season, when the Chiefs went on to the Super Bowl.

It's not entirely on Allen's shoulders that the Bills keep coming up short, though. Take the game in January, when he threw for 329 yards and four touchdowns while running for another 68 yards. It was an incredible performance, but one matched by Mahomes, who had 378 yards passing and three touchdowns to go with 69 yards rushing and another score.

It was the first time in NFL history a quarterback — let alone two — threw for at least 300 yards and three touchdowns while completing 70% of their passes and leading their teams with at least 65 yards rushing.

“As a football fan myself, when I'm watching games, I love watching him play,” Allen said. “He can do everything you want. His teammates love him, and I know he's got a good grasp in the locker room over there, and how he carries himself, the things that he does off the field for his charity. He's a special football player and a special guy.”

The similarities between Mahomes and Allen help to form the bedrock of their friendship.

When Mahomes was coming out of Texas Tech in 2017, many labeled him just another "Air Raid" quarterback, one whose prolific passing numbers would never translate to the NFL. And when Allen was drafted the following year, critics pounced on his erratic performances at Wyoming, along with the fact that he played a lower level of competition.

Mahomes and Allen have been proving people wrong ever since.

“You heard all those stories of when (Allen) was coming out, about this and that, and you're always pulling for those guys that even do better than what was expected,” Chiefs coach Andy Reid said. “He's a good football player, tough kid. In a good system, too. He's blessed to have good coaches, which helps.”

Allen's head coach, Sean McDermott, learned the ropes from Reid more than a decade ago in Philadelphia.

There are a lot of great rivalries in the NFL, though. Mahomes and Allen have transferred theirs away from the field.

They first spent considerable time together at The Masters in April 2021, and both have played in the American Century Championship, an annual celebrity golf tournament in South Lake Tahoe, California.

Earlier this year, both found themselves in Miami for the Formula One weekend. Mahomes called up Allen on FaceTime and invited him over, and the two hung out for a couple of hours on the Saturday night before the race.

Yet it's on the field where they shine brightest.

Their styles are remarkably similar — big arms, plenty of athletic ability and the natural creativity and improvisational skill that makes them a handful for opposing defenses. They make everyone around them better, and as a result, each has their team 4-1 and atop their division heading into their latest matchup Sunday in Kansas City.

“Whenever they’re getting ready to put Patrick Mahomes and Josh Allen in the Hall of Fame," Bills pass rusher Von Miller said, "that game (in January) and of course games throughout these upcoming years, will be the games they talk about, and it’s just an honor and a privilege to be a part of it.”