What Would Have Been: Triple Crown finale and French finals 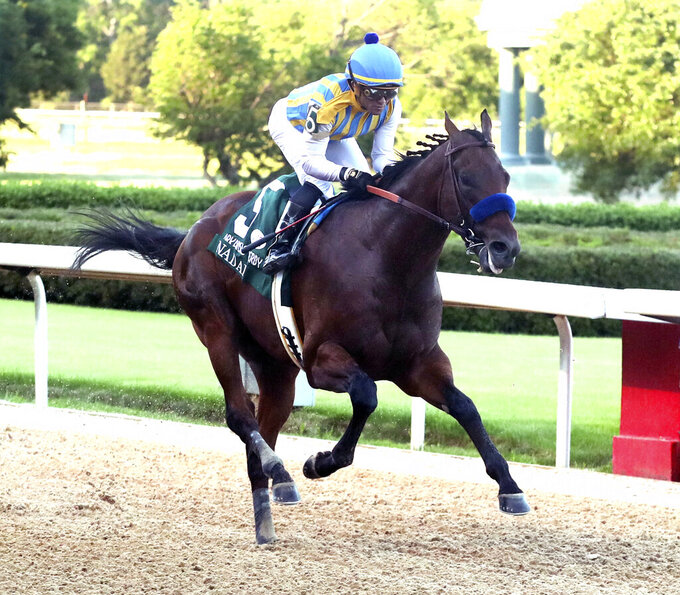 FILE - In this May 2, 2020, file photo, jockey Joel Rosario and Nadal cross the wire to win the second division of the Arkansas Derby horse race at Oaklawn in Hot Springs, Ark. Nadal, who now won't have a shot after an ankle injury in training last week, could have been racing to become trainer Bob Baffert's third Triple Crown winner in six seasons, if not for the coronavirus pandemic. The Belmont Stakes usually wraps up a five-week span that includes the Kentucky Derby and the Preakness. All have been pushed back, though the Belmont Stakes will now go first on June 20. (Richard Rasmussen/The Sentinel-Record via AP, File)

The final leg of horse racing's Triple Crown would have been set and the French Open finals would have been contested this week if not for the coronavirus pandemic. While NASCAR is staying busy on the track, and there are signals that other sports could be working toward a return, The Associated Press looks at some other sporting events that had been scheduled the week of June 1-7:

HORSE RACING: Nadal, which now won't have a shot after an ankle injury in training last week, could have been racing to become trainer Bob Baffert's third Triple Crown winner in six seasons. The Belmont Stakes usually wraps up a five-week span that includes the Kentucky Derby and the Preakness. All have been pushed back, though the Belmont Stakes will now go first on June 20.

TRIVIA BREAK: With the Belmont Stakes being the first Triple Crown race this year, followed by the Kentucky Derby on Sept. 5 and the Preakness on Oct. 3, the Triple Crown will be run out of its usual order for the first time since when? (Answer at bottom).

MLB: A series matching defending division champions was scheduled, with the Los Angeles Dodgers set to play the Atlanta Braves for the first time this season. The NL West Dodgers swept a three-game set at home last season. Both lost in a best-of-five NL division series to start last year's playoffs. They were also division winners in 2018, when Los Angeles beat the NL East Braves in four games in an NLDS.

PGA: Patrick Cantlay rallied from four strokes back in Ohio with an 8-under 64 for the best closing round by a winner at the Memorial, which was founded by Jack Nicklaus in 1976. This year's Memorial was rescheduled for July 16-19.

CLOSE TO CROWNS: The NBA Finals and NHL Stanley Cup playoffs would have been been in their best-of-seven championship series.

LPGA: The U.S. Women's Open was to be played at Champions Golf Club in Houston the first week of June, but now will be played two weeks before Christmas — the latest a major golf championship has ever been played.

TENNIS: The second week of the French Open would have had fourth-round matches, quarterfinals, semifinals and the final for men and women. Rafael Nadal could have been trying to add to his 12 trophies at Roland Garros — already more than any man or woman has won at any major tennis championship. More significantly, a 20th Grand Slam title overall would tie the men’s mark held by Roger Federer, who was going to sit out this French Open after knee surgery. Novak Djokovic has won five of the past seven Grand Slam tournaments to raise his career total to 17. The No. 1-ranked woman, Ash Barty, won her first major title at last year’s French Open.

TRIVIA ANSWER: The Preakness was run a week before the Kentucky Derby in 1931, a year after Gallant Fox won the Triple Crown and a year before a nearly nine-decade stretch of the Kentucky Derby-Preakness-Belmont order.