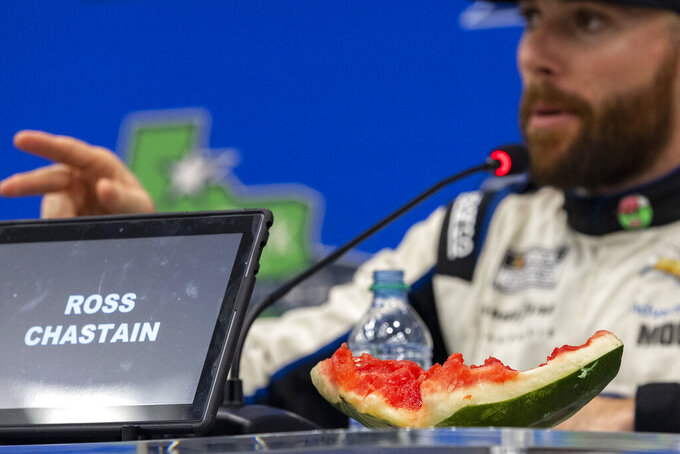 Ross Chastain shares his experiences as a watermelon farmer during a post-race interview after winning a NASCAR Cup Series auto race at Circuit of the Americas, Sunday, March 27, 2022, in Austin, Texas. (AP Photo/Stephen Spillman)

AUSTIN, Texas (AP) — Ross Chastain was testing in Delaware when he received an ominous text from a friend: ‘Justin bought Chip's,’ wrote the friend.

“I said, ‘I hope you mean Doritos,’” deadpanned Chastain.

He had finally landed his dream job with a top Cup team and the eighth generation watermelon farmer from Florida felt he'd at last become a serious contender to win races at Chip Ganassi Racing.

Then in came Justin Marks, one of a many young new owners on the NASCAR grid. Marks had Pitbull as his partner at Trackhouse Racing and they fielded one car in 2021, for popular Mexican driver Daniel Suarez.

Marks refused to jump into the bidding wars for the charter he needed to ensure Trackhouse's stability. Instead, he just cold-called Ganassi and negotiated the purchase of Ganassi's entire NASCAR organization.

Marks, who just turned 41 on Friday, has flipped upstart Trackhouse into a playoff-bound Cup team.

Chastain, in his sixth race since Ganassi's 20-year-old operation was reshaped into Trackhouse, became a first-time winner alongside the organization Sunday by bashing and banging his way around the final lap of overtime at the Circuit of the Americas road course.

He sat at the Dover Motor Speedway test last June trying to get any information possible on what was happening to his place of employment, and then the 29-year-old finally texted Marks.

The second seat at Trackhouse was never a serious question to Marks. He kept both Chastain and crew chief Phil Surgen, getting himself a turn-key complete second team in his purchase.

Of the 128 Trackhouse employees, all but 13 are remaining Ganassi employees.

“The pitch was, ‘Let’s build a great team together, let’s do all of this together. That was the ’inside of the building pitch,'" Marks said of his day of sale speech to the Ganassi organization.

“The ‘outside of the building pitch’ is this sport is ready for challengers. It’s ready for disruptors," he added. "It’s ready for people to come in and challenge the status quo and how we do things, have some fun, look good, try to be fast, win races, have a good time doing it.”

He didn't need to convince Chastain, but found the driver somewhat freaking out when they had their first conversation.

“Ross didn’t really know which way was up. ‘Am I a part of this? Do I have a future with the company? What’s the plan here?’” Marks recalled. He said that only 12 people had been privy to the shock purchase prior to its announcement and that Chastain needed to be patient as the transition began.

“The dust is settled, we know sort of which way is up and we’re planning for what’s next, I called him,” Marks added. “I was up in Michigan, and I called him, and I told him that ‘I’ve always been a huge believer in your talent. I think that you’re prime to breakthrough. I want to put you on a two-year deal so you’ve got some job security. This is your race team. Let’s go win.’"

Ganassi congratulated Trackhouse and his former driver with his traditional “#ilikewinners” social media post. He'd given Chastain his first big breaks, only to have a sponsorship deal go belly-up. The FBI convicted DC Solar of operating a billion-dollar Ponzi scheme — a deception so steep it nearly bankrupted the race organization and ended Chastain's dream-come-true.

He believed in Chastain, though, and got him back in 2021 in a Cup ride that was running well at the time Marks announced he'd bought out Ganassi. The purchase of the team gave Marks two charters — the guaranteed entry into each week's 40-car field, and a legal document that ensures each chartered-Cup team retains free market value.

Chastain and Surgen were an easy companion for Suarez, who has been just as impressive as Chastain through the first six races of the season. NASCAR this season introduced a Next Gen racecar that has helped Trackhouse explode out of the gate: Suarez and Chastain have both challenged for wins before Sunday.

And, Suarez led every lap in winning the first stage of Sunday's race. His tire blew on the second lap of the second stage and, poof!, a win was gone.

Suarez also had to drive the final 25 laps with no power steering. And then his new teammate beat him to Trackhouse's first win.

Suarez did go to victory lane to congratulate Chastain and the team.

“I think he is gutted ... and he was so early in the process of building Trackhouse that I think in his mind he was always going to be the guy that was going to deliver our first win,” Marks said. "I think that’s hard on him.

“But in a way, I always try to take the long view on this stuff. These are our guys,” Marks continued. “These are our drivers. We’re building a team around both these guys, and that’s what I’ll tell him this week, ‘You have an awesome opportunity to win Richmond (on Sunday) and that’s what we’re going to focus on.’”

It's not a bad problem to have for a team in just its 42nd Cup race: Chastain got his first win, and Suarez seems awfully close.