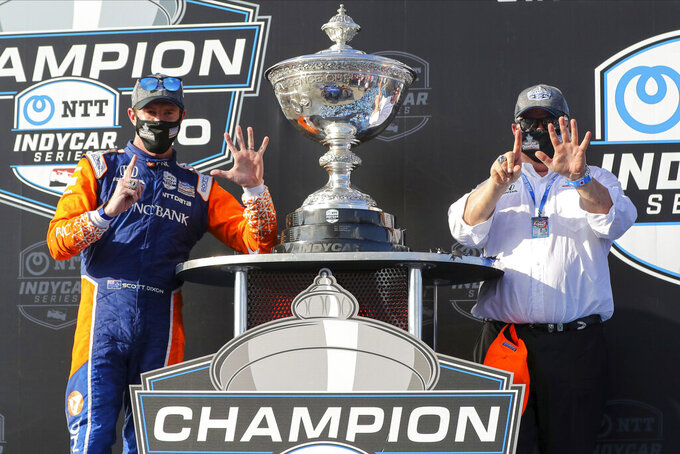 BIRMINGHAM, Ala. (AP) — Scott Dixon looks around the IndyCar paddock and sees drivers half his age acting like A.J. Foyt even if they’ve never crossed the finish line first.

They are young and brash with the same swagger of “Super Tex,” the winningest driver in IndyCar history.

“Most of them rock up these days feeling, you know, it seems like they’ve won everything in the world already, you know?” Dixon said Friday. ”You definitely see the changing of the guard, which is always interesting."

The six-time champion needs just one more title to tie Foyt's record of seven and his 50 career victories trail only Foyt (67) and Mario Andretti (52) in the record books. Will Power and Sebastien Bourdais at 39 wins each are the only active drivers even remotely in Dixon's class.

And yet those trophies and numbers and his two decades of dominance don't drive Dixon the way they once did. Don't get him wrong — he loves to win. But losing sticks with him a whole lot longer than a victory celebration.

He led wire-to-wire last year in winning his sixth title, but those celebratory moments were fleeting.

“It's nice to have victories but it's not something I really dwell on too much,” Dixon said. “The hard part is always all the things you remember the most of the close misses. I think that's the part of what drives you. I don't go to bed thinking about how great it was to win a sixth championship. But I do go to bed thinking about how close we lost the Indy 500 last year. That's what keeps the fire strong.”

Dixon is now in pursuit of motorsports' magical number: Michael Schumacher and Lewis Hamilton both won seven Formula One titles, while Richard Petty, Dale Earnhardt and Jimmie Johnson each won seven in NASCAR. Foyt is alone in IndyCar.

But time is not on Dixon's side.

He turns 41 in July and although he has won two of the last three championships, he has never won back-to-back titles and guesses he has five good years left in his career. Team owner Chip Ganassi noted that Alex Palou, the 24-year-old second-year IndyCar driver, was the fastest of the four Ganassi drivers in preseason testing and might very well be the one Dixon has to beat this year.

Dixon thinks he is up for the challenge and finds that much like Tampa Bay quarterback Tom Brady, who at 43 won his sixth Super Bowl in February, he's in the best physical shape of his life. His cardio and strength training has evolved over the last decade, and he said he doesn't have a great gauge on his reaction speeds “because I still pass my tests, so that's a good thing.”

His biggest challenge, he's found, has been time management since he and wife, Emma, decided to expand their family last year. They welcomed a third child — their only son — a decade after starting their family.

Kit Dixon has been an eye-opening adjustment after two daughters because every crash, bang and fall creates a momentary panic only for the toddler to bounce back up and get back on his way.

“He definitely loves adventure and has a pretty high pain tolerance,” Dixon said. “It's very different from the girls.”

This weekend will be the first race for father and son, a moment Dixon can't wait to share with his little boy.

“I took him to a go-kart race once and his eyes were popping out of his head, so I'm really looking forward to taking him out and showing him cars on the track,” Dixon said. “I think this is going to be a very fun year for our family.”