As F1 returns to Bahrain, an ex-prisoner awaits compensation 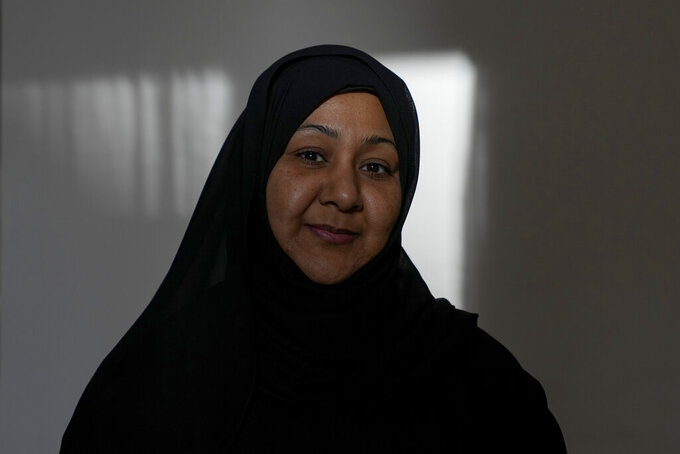 Bahraini former political prisoner Najah Yusuf poses for a photograph during an interview with The Associated Press in Manama, Bahrain, Thursday, March 17, 2022. As Formula One begins the new season in Bahrain at a track where a huge contract extension was recently signed, Yusuf still waits for compensation after allegedly being tortured and abused in a Bahrain jail over a social media post demanding justice for those imprisoned for protesting the annual race. (AP Photo)

MANAMA, Bahrain (AP) — As Formula One begins the new season in Bahrain at a track where a huge contract extension was recently signed, former political prisoner Najah Yusuf still waits for compensation after allegedly being tortured and abused in a Bahrain jail over a social media post criticizing the annual race.

Bahrain has hosted F1 since 2004 and the eagerly-awaited season opener is on Sunday. Bahrain has been accused of exploiting the series to “sportswash” its human rights record, by using a high-profile event to project a favorable image. The new contract with F1 is until 2036.

“They signed a contract worth millions with the Bahraini government without taking into consideration what I and others went through, without making sure of the situation here and how people are being treated for practicing their normal right of demonstrating and practicing their freedom," Yusuf told The Associated Press on Thursday in an interview in Bahrain. "I call it the Formula of blood, because it is set upon the suffering, blood, sacrifice of the victims. Despite its power, its influence, it has decided to put hand in hand with the government oppressing people, instead of trying to highlight the suffering of people and bring their voices out.”

Jailed in April 2017 for criticizing the Bahrain F1 race in a Facebook post and calling for the release of detainees who had protested the event, Yusuf spent two years and four months in prison before her release.

A UN Working Group on Arbitrary Detention then called on Yusuf’s alleged abusers to offer her redress and compensation. In October 2019, an F1 lawyer wrote to a British House of Lords member saying it had read the WGAD report and was raising it directly with the Bahraini authorities.

“In doing so, we are highlighting the report’s findings and recommendations for redress and requesting that they consider these in detail,” F1 wrote to Paul Scriven, following his highlighting of Yusuf’s case.

But Yusuf, who lost her job, has still received no compensation.

“It’s a very painful thing that during the past three years no one has actually met their promise by speaking of my condition and what I went through," she said. "It’s very difficult to live the unknown, since I used to have a stable life, a stable job, a stable income.”

So on Monday Yusuf wrote a letter to F1 chief executive Stefano Domenicali reminding him of those assurances she was given — which were before Domenicali was F1's CEO.

“I am still seeking redress and you have a part to play. Since you (F1) promised to raise my case with the Bahraini government, nothing has happened. What action have you taken?” she wrote to Domenicali in a letter shared with the AP by The Bahrain Institute for Rights and Democracy. “It pains me to witness this complete disregard for my suffering, whilst F1 makes millions in profits.”

She said Thursday she has not had a response.

The letter was co-written by Hajer Mansoor, who shared a prison cell with Yusuf.

Mansoor, released in March 2020 a few months after Yusuf, asked Domenicali to meet them both in Bahrain.

“We believe that you have power to make a difference," she wrote.

“We feel very connected because we were feeling the same pain. We used to spend most of the time without leaving (the cell),” Yusuf said Thursday. “That built a bond, we became more like sisters.”

In November 2020, Yusuf was one of three torture survivors who wrote to seven-time F1 champion Lewis Hamilton. She described her harrowing ordeal in prison.

“They beat me and tore my hijab off and tried to strangle me with it. When I still refused to comply, one officer sexually assaulted me," the mother-of-four wrote. "My dignity was destroyed and I considered suicide. Only the thought of my children stopped me.”

The AP asked the Bahraini government's National Communication Centre for its position on human rights.

“Bahrain has a zero-tolerance policy towards mistreatment of any kind and has put in place a robust system to investigate complaints,” a government spokesperson said by email. “Bahrain welcomes and actively supports the role Formula One can play in shedding light on human rights issues in all countries it operates in, now and in the future.”

Hamilton, who has used his huge profile to speak up on human rights, had an impact.

In September last year, Yusuf was reunited with her 18-year-old son Kameel Juma. He was released after being imprisoned in Bahrain for what Amnesty International deemed a “reprisal against his mother."

Hamilton previously said he hoped to speak directly with Bahrain’s Crown Prince Salman bin Hamad Al Khalifa on the subject of the Persian Gulf State’s human rights record. He said F1 was “ duty bound” to raise awareness on human rights in the countries where it stages races.

After Bahrain, F1 goes to Saudi Arabia on March 27.

Last Saturday, Saudi Arabia executed 81 people in the largest known mass execution carried out in the kingdom in its modern history.