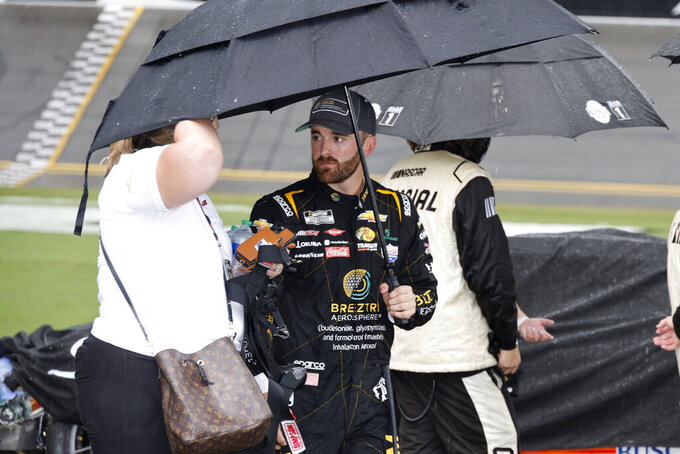 DAYTONA BEACH, Fla. (AP) — Austin Dillon's wife was doing a rain dance during a lengthy weather delay in hopes of getting the skies to open up again and wash out the rest of the race.

There was no jinxing this one. Dillon avoided a massive wreck in the rain to take the lead before a red flag and returned more than three hours later to finish off an improbable victory at Daytona International Speedway and snag a playoff spot in the Cup Series’ regular-season finale Sunday.

Dillon passed Austin Cindric with three laps to go and was unchallenged down the stretch. It was an aggressive move that capped a drama-filled race and set off a wild celebration for a team that's usually a factor at Daytona.

“It’s crazy,” said Dillon, whose fourth career Cup victory ended a 78-race winless streak. “You just never give up and have faith. We had some tough finishes this year, like Charlotte. I beat myself up over that. I made a good move and just didn’t finish it off. Today we finished it off.”

Martin Truex Jr. was the biggest loser. Truex looked like he would secure the final postseason berth when rain halted the race with 21 laps remaining, but he faded after the restart and allowed Ryan Blaney to make up ground in a points scramble.

Blaney finished seven spots behind Truex in the race but three points ahead in the standings.

“You just try to stay optimistic,” Blaney said. “Definitely a roller-coaster of emotions that ended on a high note.”

Added Truex: “We gave away plenty of points throughout the season. It is what it is."

Dillon's victory in the No. 3 Chevrolet was as stunning as Blaney's comeback. Running 16th at the time of the crash, he turned onto the apron to avoid the 15-car melee between Turns 1 and 2 that was caused by a summer shower everyone saw coming. Cars started sliding sideways heading into the high-banked turn, a result of slick tires losing grip on wet asphalt.

Daniel Suarez and Denny Hamlin were running 1-2 when the pack drove into the rain with 23 laps remaining.

“Just throw the caution before the rain came," Hamlin said, adding that “better officiating” is needed. "We had rain down the front, so about 10 seconds before we got into Turn 1, it was raining. I’m sure the fans felt it and then they watched us all pile in there.”

For a second, it looked like 2014 series champion Kevin Harvick was going to make it through the mess and grab the lead as the caution flag flew. But then spinning Ty Dillon — Austin’s little brother — sideswiped Harvick and knocked him into the wreckage.

That allowed Austin Dillon, who started the day 19th in points, to essentially steal a playoff spot. It also created a controversial finish — should NASCAR have halted the race earlier? — and provided the kind of “Game 7” moment NASCAR wanted when it moved the regular-season finale to unpredictable Daytona in 2020.

NASCAR seemed intent on fixing its non-call by waiting for a window of sunshine.

“It's not something you can predict when it’s going to start raining,” said Scott Miller, NASCAR's senior vice president of competition. “Just a super bad situation for everybody.”

Inclement weather was a factor all weekend. Thunderstorms delayed the Xfinity Series race Friday night and pushed the Cup race from Saturday to Sunday morning. More rain was in the forecast Sunday, and dark clouds had surrounded the track for at least half an hour before several drivers reported seeing raindrops on the previous lap.

But it wasn't enough for NASCAR to stop the race — until it was obvious and too late.

Only 18 cars stayed on track once the green flag dropped and only 10 finished on the lead lap. Dillon's teammate at Richard Childress Racing, Tyler Reddick, finished second, followed by Cindric, Landon Cassill and Noah Gragson.

Defending series champion Kyle Larson was the first driver out of the race. Larson drove his car to the garage after 14 laps with a timing belt issue. He finished last in the 37-car field and missed out on extra playoff points.

It was Larson’s third consecutive DNF at Daytona, including wrecks to end his last two starts at the famed track. He is now winless in 16 Cup starts at Daytona.

“I guess there’s one positive: I didn’t get caught up in a crash,” Larson said.

This may have been Kyle Busch’s final race at Daytona for Joe Gibbs Racing.

Busch doesn’t have a contract for next season after his longtime sponsor decided to pull out of NASCAR at the end of 2022. Joe Gibbs Racing, with help from Toyota, has worked to find a deep-pocketed replacement for M&M’s and Mars Inc., but if nothing comes together in the next few months, Busch will be driving elsewhere next year.

Busch declined to get into contract negotiations Saturday, refusing to say whether he’s turned down a previous offer from JGR.

“This is not the place to start airing any dirty laundry,” Busch said. “Just trust me: In time, things will work out. And what happens, happens.”

“Kyle Busch is our 60-home-run hitter and we’d be foolish not to put everything in play to keep him in the family, and that’s what we continue to do,” said David Wilson, president of Toyota Racing Development. “This is not just an offensive consideration. I don’t want to race against a (ticked) off Kyle Busch. Wherever he lands, he’s going to do some damage.”

The first round of the playoffs begin at Darlington next Sunday. Joey Logano won the May race at the track, with Ford and Chevy claiming 19 of the top 20 spots.