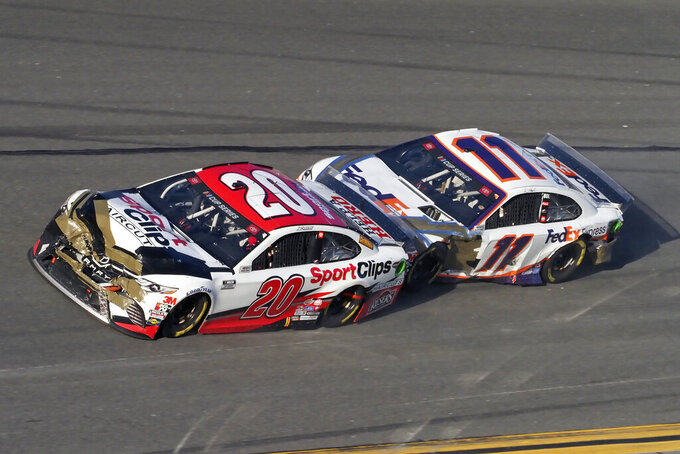 Erik Jones (20) gets a push from Denny Hamlin (11) to help him pull away from other cars on the final lap to win the NASCAR Busch Clash auto race at Daytona International Speedway, Sunday, Feb. 9, 2020, in Daytona Beach, Fla. (AP Photo/Darryl Graham)

DAYTONA BEACH, Fla. (AP) — NASCAR is off to an intriguing start and the season has barely begun.

In the first 48 hours, Ricky Stenhouse Jr. and Erik Jones, a pair of drivers with something to prove, grabbed the first two wins of the year. Brad Keselowski already seems at odds with teammate Joey Logano and the Busch Clash was an exhibition in how not to drive in the Daytona 500.

Kevin Harvick casually mentioned he'd signed an extension with Stewart-Haas Racing through 2023, a move that takes him out of contention to join Fox Sports while Jeff Gordon acknowledged on social media he is adjusting to this year's two-man booth.

Corey LaJoie presented Rick Hendrick with a handwritten letter stating his case to replace Jimmie Johnson in the No. 48 next season, while Kyle Larson began his season as the top free agent in NASCAR without a single stress about his future.

The main event is still a week away, but NASCAR got a strong setup from its first weekend at Daytona International Speedway.

Stenhouse back in September was subdued sitting at a sports book in a Las Vegas casino. Good friends Larson and Denny Hamlin were exhausted after a day promoting the start of the playoffs, but Stenhouse had not qualified to race for the championship and had the entire day off.

“I wouldn’t have minded working today,” he said as his buddies lamented appearance after appearance.

On Monday, as those same friends scattered to enjoy two days off from Speedweeks, it was Stenhouse jumping from morning show to morning show to talk about his pole-winning run for the Daytona 500. It came on his second day driving a Chevrolet Camaro and with his small new team at JTG-Daugherty Racing.

Roughly a month after missing the playoffs, Stenhouse was dumped by Roush Fenway Racing, the team that brought him to NASCAR and where he won a pair of Xfinity Series championships. Stenhouse thought he was set for 2021, but instead he had to scramble to get the JTG seat and managed to bring crew chief Brian Pattie from Roush, along with Mike Kelley, who guided Stenhouse’s Xfinity championships.

Now the driver derisively referred to as “Wrecky Spinhouse Jr.” for his aggressive racing on superspeedways is the star of the show headed into “The Great American Race.” He believes his hand-picked JTG support system can turn the team into a legitimate contender.

“I think there's a handful of us that feel like we have something to prove, and two of those are in my corner with me at JTG-Daugherty Racing with Mike and Brian,” Stenhouse said. “I know that I feel like I can still get the job done behind the wheel and win races like we did in the Xfinity Series. ... to go to a whole brand new place, I think I'd have been lost not having them there.”

Jones is in a similar situation as the least successful driver in the Joe Gibbs Racing juggernaut. The four drivers combined for 19 wins last year, and Jones only notched one. He was eliminated in the first round of the playoffs – the only Gibbs driver not to make it to the championship finale.

Jones’ contract extension also dragged deep into last season as Gibbs had to decide if it wanted to bring up Christopher Bell to the big leagues.

Jones ultimately won the Southern 500 at Darlington, finalized a contract extension and Bell was farmed out to a Gibbs affiliate. But Jones has to be able to compete with teammates Kyle Busch, the reigning Cup champion, Denny Hamlin, a two-time and defending Daytona 500 winner, and Martin Truex Jr., winner of seven races last season.

With a huge push from Hamlin, Jones took Gibbs to victory lane for the first time this season when he won Sunday’s exhibition Busch Clash. There were only six cars running at the end of the third overtime, when Jones with a crumpled hood crossed the finish line.

“We spent a lot of time reflecting and talking and thinking about things we could do better,” crew chief Chris Gayle said. “Do we want to be the fourth-best JGR team? No. And we were. We have done a lot of things differently and looking to be better.”

So is Team Penske, which orchestrated a three-team swap during the offseason that gave each of its drivers a new crew chief.

It meant Paul Wolfe, considered one of the best in the garage, was moved from Keselowski to Logano after 10 seasons, 29 wins and a Cup Series title. Ryan Blaney got championship-winning crew chief Todd Gordon from Logano, and Jeremy Bullins went from Blaney to Keselowski.

Keselowski’s debut with Bullins got off to a rocky start when the driver hit a fence heading out to practice Saturday. Keselowski watched from the garage for at least four hours as his team tried to repair the No. 2 Ford.

Then in the Clash, where he was racing for a moral victory, he got caught in a wreck triggered by Logano's block on Busch.

"Dumb, dumb racing," said Keselowski, who slapped the side of an ambulance with both hands in frustration. "We shouldn't be wrecking all these cars. You'd think these guys would be smarter than that. It's the same thing over and over: Somebody throws a stupid block that's never going to work and wrecks half the field.

"I don't know. Maybe we need to take the helmets out of these cars and the seat belts out. Somebody will get hurt, and then we'll stop driving like (expletive)."

Asked if he planned to discuss the accident with any other drivers, Keselowski deferred: “I’m going to Disney World tomorrow."

Logano avoided the topic, too.

“I’m going to Disney World too, so I’ll see him there," Logano said with a smile. “I’m sure he’s all right. We get along fine.”

There is a week to see if everyone cools down before the Super Bowl of NASCAR.