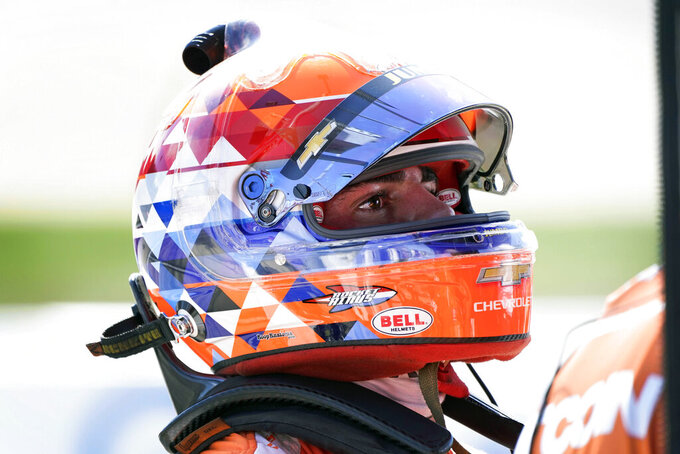 The 21-year-old Dutchman said on Twitter he was staying in the No. 21 Chevrolet, and unlike recent contract dealings in both IndyCar and Formula One, this one was backed minutes later when ECR confirmed the news.

VeeKay, who was permitted to talk to other teams as of Monday of this week, entered into free agency with a new agent this season. Rather than wait to see how the situation is resolved at Chip Ganassi Racing with reigning IndyCar champion Alex Palou, VeeKay decided to stay where he is and not gamble on the No. 10 at Ganassi possibly opening.

IndyCar rookie Callum Illot did the same last week when he honored a handshake deal with Juncos Hollinger Racing to return next year — even though the No. 10 could open if Palou finds a way out of his hotly contested contract. Ganassi is suing the Spaniard over a deal Palou signed to join McLaren Racing — although it's not clear if that's for an IndyCar or F1 seat.

“I am very excited to continue with Ed Carpenter Racing for what will be my fourth year," VeeKay said. "Ed Carpenter gave me the opportunity to drive for the team when I came out of Indy Lights and has let me showcase my talents in an Indy car ever since.

“The continuity at ECR is great, there have barely been any changes in my time here, and it’s very nice to have the same group of people around me all the time."

VeeKay was the 2020 IndyCar rookie of the year and scored his only career victory last year on the road course at Indianapolis Motor Speedway. He's since tattooed the date of that breakthrough victory on his bicep.

VeeKay has one pole this year, one podium finish, and is ranked 11th in the IndyCar standings headed into Sunday’s race in the downtown streets of Nashville. He's twice qualified on the front row for the Indianapolis 500.

Team owner Ed Carpenter watched VeeKay progress through the Road to Indy, which included one championship, two runner-up finishes in the points standings, 16 wins and 36 podiums in just 48 races.

“I am so happy to be able to extend our relationship with Rinus, he is an extremely versatile and talented driver,” said Carpenter. “It has been and remains our hope to build our team to new heights with Rinus helping lead the charge. Our goals and expectations are to win races and to compete for championships. With Rinus’s growth and the support from BitNile and Todd Ault, we are primed for success.”

His extension comes amidst a flurry of crazed free agency in both IndyCar and F1. Ganassi said it picked up its option on Palou last month and then hours later Palou said he would not be returning to the team. Minutes after that, McLaren said it had signed Palou.

Just this week, the F1 dominoes began to fall when Fernando Alonso blindsided Alpine by signing with Aston Martin. The next day, Alpine said it was promoting reserve driver Oscar Piastri, only for the 21-year-old Australian to denounce the move.

Piastri is also believed to have a contract with McLaren, which gives McLaren far too many drivers for available seats. The Palou debacle is already in the court system; Piastri's situation is less clear.

In IndyCar, several drivers are still attempting to finalize their 2023 plans, including seven-time NASCAR champion Jimmie Johnson. He'd like to return for a third season of IndyCar but has yet to secure a commitment on funding from sponsor Carvana.

Four-time Indianapolis 500 winner Helio Castroneves is also still working on his future and wants to return for a full season with Meyer-Shank Racing. The Brazilian said he's not interested in running Indy only for Shank and wants a full year.

Castroneves is also attempting to get a seat in NASCAR's season-opening Daytona 500.