Too soon: Truex Jr. not ready to consider NASCAR future 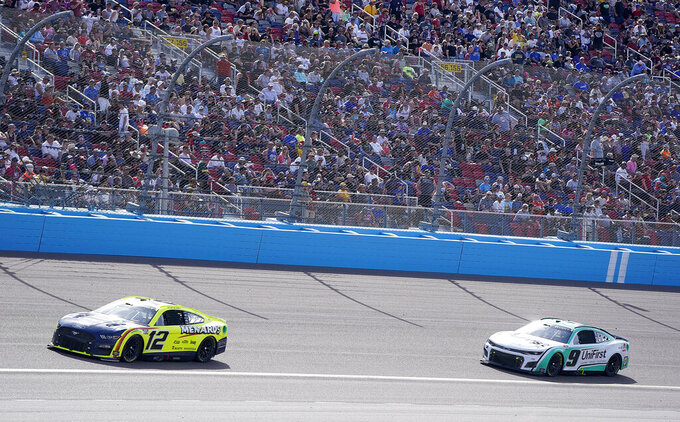 Martin Truex Jr. left Richmond Raceway a winner in his last visit to the Virginia short track, a playofff victory last September that helped him get into NASCAR's championship round and showed the veteran has plenty left in his tank.

He returns to Richmond six months later with his NASCAR future unclear. The 41-year-old Truex is in the final year of his contract with Joe Gibbs Racing and hasn't decided how long he wants to continue his career.

There is no wait-and-see going on with Truex, who in his 17th full Cup Series season is grappling with NASCAR's new Next Gen car. Truex just simply isn't a planner — an annoying trait for his friends and family — and is simply delaying thinking about his future in racing.

He heads into Sunday's race at Richmond winless — all four of the Gibbs drivers are winless through the first six Cup races, as is the Toyota camp — and seventh in the standings. His slow start sparked curiosity about how long he wants to race.

“I try not to look too far ahead; I'm not a big planner,” Truex told The Associated Press. “As long as I am having fun and competitive, I'll keep going.”

That ties Truex to his ability to learn the Next Gen, which in its debut season has featured six different winners through six races. The oldest driver to win a Cup race so far this season is reigning series champion Kyle Larson, who turns 30 in July.

Truex's seventh-place finish on the road course at Circuit of the Americas in Texas last Sunday was his best so far of the season. At Richmond, he has won three of the last five Cup races and has not finished lower than fifth during that streak.

He has not studied any numbers, nor will he set any benchmarks he must hit to continue his Cup career.

“I try not to overthink stuff. I just do my thing and roll with the punches,” Truex told AP. “I've had a lot of ups and downs in my career, I understand the sport, you just take it as it comes and enjoy the good days.”

Truex knows he can't live in blissful ignorance for much longer; Joe Gibbs is eventually going to need to know what Truex is thinking about his future.

“Pretty soon because I’m pretty sure I’m going to start getting pressure from the team,” Truex said. “They have to plan. So there always comes a deadline. I don’t know when that is, but I’ll have to have this conversation I’m sure pretty soon.”

Denny Hamlin might have been the first NASCAR participant to throw the caution flag on plans to race the Next Gen in the 24 Hours of Le Mans next season.

Hamlin was immediately annoyed when NASCAR announced it had partnered with Chevrolet and Hendrick Motorsports to develop a special version of the new car that can enter Le Mans. The project means both Hendrick and Chevrolet have testing ability not afforded any other teams.

Hamlin's initial gripe seemed offhanded, but the Toyota driver for Gibbs and co-owner of Toyota team 23XI Racing is serious about the slight. He said for the rest of the industry — Ford and Toyota teams, as well as the Chevy teams that are not part of Hendrick — learning about the project through a news conference was insulting.

Hamlin alleged it is likely to give NASCAR's winningest race team an advantage. Three of the four Hendrick drivers have a win so far this season and Alex Bowman is the defending winner at the Richmond spring race.

“I'm concerned about, how is it not an advantage?” Hamlin said. “You cannot convince me right now that the one team that does not need any advantages has gotten a very big advantage.”

Chase Elliott, the lone Hendrick driver without a win so far this season, is the FanDuel Sportsbook favorite.... Ross Chastain last week at COTA became the third first-time winner this season, joining Austin Cindric and Chase Briscoe. It marked the first time since 2001 that three first-time winners have opened the Cup Series season with victories through the first six weeks. A new winner Sunday at Richmond would be a NASCAR record through seven races. .... Richmond has crowned five first-time winners in the Cup Series, most recently Kasey Kahne in 2005.