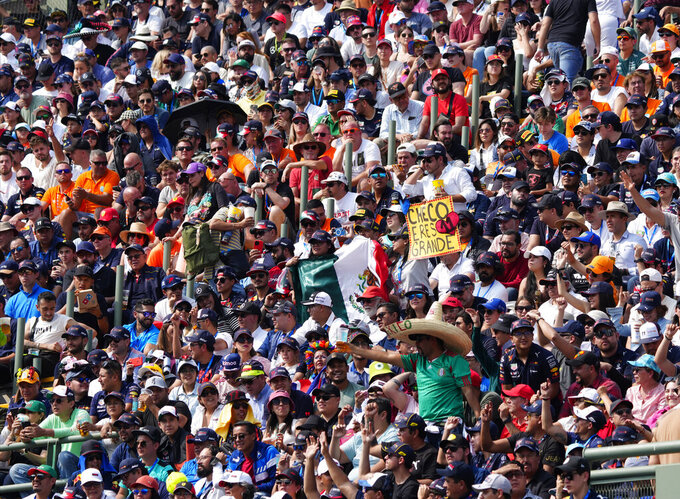 MEXICO CITY (AP) — The fans swarming Red Bull's hospitality suite were careful enough to leave a walkway for Sergio Perez to exit. Clad in green, white and red for the Mexican flag or Perez's gear, they desperately waited for their shot at a selfie, a signed program, just a split second of time with their Formula One hero.

But the exuberance of his Mexican fanbase was overwhelming for Perez, one of the many drivers who felt the paddock was too crowded last week at his home Mexico City Grand Prix.

So the most successful racer in Mexican history — he is one of only six from his country to make it to F1 since 1950, and his four Grand Prix victories make him the most triumphant — avoided his fans. Perez instead exited from the back of hospitality and used a quiet access path to pop out in the open paddock, far from his fans.

Unlike on race day, when Perez held his hand to his heart for the reverence he was shown during a parade lap, he found the crowded paddock to be too much.

“Mexicans are very enthusiastic in general, but it was just too many people for the amount of space,” Perez said of the Oct. 31 race weekend. “I think it was like Miami, you couldn't walk. It's up to the organizers to make the paddock a little bit more comfortable.”

Perez joined many drivers and teams in publicly urging F1 to examine its paddock access policy, with some calling for F1 to set behavior guidelines for inside the gates.

Drivers complained they were mobbed from the moment they stepped onto the grounds of the Autódromo Hermanos Rodríguez, that walking to and from their garages was a claustrophobic exercise in attempting not to be knocked over while signing everything shoved their way. Pierre Gasly discovered both his backpack and passport had been opened as he made his way through the crowded paddock upon arrival.

“I think to be in the paddock and have a VIP pass, it’s a privilege and I think you also should act with some maturity and have respect. And that hasn’t always been shown this year," said Daniel Ricciardo of McLaren. “I feel like they should at least have some guidelines, like these are the kind of the rules inside the paddock. I do want the atmosphere. And I don’t want security to be honest, I don’t want to be walking in a huddle and just walking through people. I want to be able to have photos and sign."

F1 heads next to Brazil for this weekend's Sao Paulo Grand Prix, and the fans are expected to be as exuberant as those in Mexico City. It's cultural, noted Brazilian driver Bruno Junqueira, a three-time CART Series runner-up who returned to Mexico City for an IndyCar legends event held ahead of the F1 race.

“What's happening in Brazil and Mexico is they love heroes, they need heroes,” Junqueira said. "Soccer is number one in both countries, but then racing. Fans they see a brave person who risks his life racing so are more of a hero to them than a soccer player.

“It's pride. These are still third-world countries and for a Mexican to go to Formula One and race against the English and Germans and Italians — globalization makes it easier, but even 20 years ago, it was much, much harder.”

Stefano Domenicali, president of F1, told the AP he did not think the Mexico City paddock was overcrowded and that the issues drivers are complaining about “are just the nature of the Latin people. They are very enthusiastic and can be very physical.”

Domenicali also noted that almost all nonworking personnel inside the paddock are either direct guests of the 10 race teams or customers who shelled out thousands of dollars for an “F1 Experience." For Brazil this weekend, 2-day Paddock Club access remained available Wednesday for $5,300, and another link offered “guided paddock access” and a pit lane walk. No prices were advertised.

“I think this is a non-problem,” Domenicali told the AP of overcrowded paddocks. “It is actually a great thing that we are living in this moment: I don't want to go back to COVID times when we were living alone in the paddock with the masks and the bubbles. I really prefer to manage the situation we now have rather than turn it into a problem.”

IndyCar driver Pato O'Ward, a native of Monterrey, Mexico, who will make his F1 debut in the opening practice at the Abu Dhabi season finale this month for McLaren, embraced the passionate fans and even took a trip into the grandstands. He was mobbed, of course, to the point he was nearly trapped in a stairwell, and chalked it up to Mexican pride.

“It's insane, every time Checo goes to the stadium, they are screaming ”CHECO! CHECO!" every single time," O'Ward told the AP, using Perez's nickname. “You don't see that in Japan. I feel like it's super intense support and from my experience, I've seen the exponential growth, but how much it can grow? I don't think the fan support is anywhere close to where it can be and the more I grow as a racer, the more the Mexican fan support is going to grow."