Keselowski seeks another title round in final Penske season 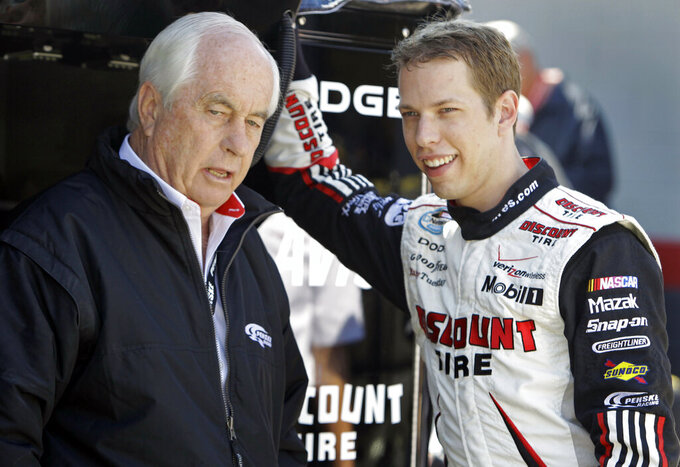 FILE - In this March 20, 2010, file photo, NASCAR driver Brad Keselowski, right, talks with team owner Roger Penske during practice for the NASCAR Sprint Cup series Food City 500 auto race at Bristol Motor Speedway in Bristol, Tenn. Heading into the race Sunday, Oct. 31, 2021, at Martinsville Speedway, Keselowski is in the final two races of his NASCAR career with Team Penske and would love nothing more than to close his 12-year run with another Cup championship. (AP Photo/Chuck Burton, File) 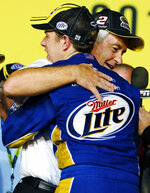 He achieved his first goal in 2012 when he won the Cup title, the first for team owner Roger Penske in NASCAR competition. Keselowski also earned Penske's 500th victory and in 2019 passed Mark Donohue as the winningest driver in Penske history.

Keselowski's time with the Penske organization is in its final two-race stretch, and he'd like nothing more than to leave with a second Cup title. To grab that one final trophy on his way out the door, Keselowski will have to race his way into the championship finale on Sunday at Martinsville Speedway.

He's six points below the cutline with three spots up for grabs at Martinsville. Kyle Larson is the only driver already qualified for the winner-take-all Nov. 7 title-deciding finale at Phoenix.

Keselowski doesn't have to win Martinsville to earn one of the remaining championship berths.

“Even if we don’t win the race, realistically, if we put up a lot of stage points and do all those things, we’ve got a great shot, so I feel pretty good about this weekend,” he said.

The competition is tough. The four drivers above the cutline are Hendrick Motorsports teammates Larson and Chase Elliott, the reigning Cup champion, as well as Joe Gibbs Racing teammates Denny Hamlin and Kyle Busch.

Below the cutline are all three Team Penske drivers — Keselowski, Ryan Blaney and Joey Logano — as well as JGR driver Martin Truex Jr. Logano is probably the only one who must win Sunday to advance, like he did in 2018 to make the championship finale.

Keselowski, winner of Martinsville's grandfather clock trophy in 2017 and 2019, has wanted to focus only on Sunday's race and not use his closing days to reflect on his time driving for one of the most respected organizations in motorsports.

Keselowski is leaving to become driver and part-owner at Roush Fenway Racing, where he'll fulfill his goal of having an important voice in the sport after 12 seasons driving for Penske that included 34 Cup victories, a Cup title, an Xfinity Series title and the successful recruitment of Logano to the organization.

But he has looked back a bit since making the decision to leave.

“I have allowed my head to go into that space a couple of times,” Keselowski said. “It’s a dangerous spot to get in because it distracts from the focus of putting it all together, so I tried to shut my brain off of that as soon as it goes in that spot, but clearly, it would mean the world to me to be able to (win another championship for Penske) and do it for our team in our last year together.”

Right after the Phoenix finale, Keselowski will get to work at Roush as a competition leader. He's expected to hire Matt McCall from Chip Ganassi Racing as his crew chief on the No. 6 Ford — Keselowski will replace Ryan Newman in that car — and have one of the top roles at the organization in the direction it takes competitively.

He expects to rely on lessons he's learned from working for Penske for more than a decade.

“I think Roger has always had a level of professionalism that is somewhat contagious and inspiring. His attention to detail is incredible,” Keselowski said. "Clearly, he’s got a great business acumen. He is really in my mind known for his contagious work ethic. You’re not gonna outwork Roger Penske and I respect that so much about him.

"My goal is to take everything I’ve learned from him and be stronger accordingly and apply it with my own personal experiences and put together a great team, a great company that can endure and win championships for years and decades to come.”

But first, he'll try to drive the No. 2 Ford to the championship on his way out the door.

What has been the best Cup season of Ryan Blaney's career took a massive hit last week at Kansas when he was crashed by non-playoff driver Austin Dillon.

The late-race wreck dropped Blaney from second on the playoff grid to below the cutline, one point behind Kyle Busch. It was a heartbreaker for the three-race winner, who believes there's only one spot available Sunday between five drivers.

Blaney figures Chase Elliott and Denny Hamlin have enough points to advance regardless of the Martinsville outcome. But he counts Martinsville among his best tracks and has scored four top-five finishes in the last five races.

“There are four of us who can get in on points pretty easily, so I think there’s no better track for it,” Blaney said.

He's trying to advance to his first championship race and reward crew chief Todd Gordon, who is retiring after Phoenix. Gordon won the 2015 championship with Logano. This is Blaney's third time in the round of eight.

“Just haven’t been able to make it to the championship race yet,” he said. “I think that’s a big hurdle for us, or myself personally. It would be a great accomplishment to be able to do, and not only for myself but everybody working on the 12 car and to give Todd a shot to run for a championship in his last season."

Martin Truex Jr., winner of three of the last four races at Martinsville, is the 10/11 favorite according to Fan Duel.. ... The winner of Martinsville has gone on to win the championship seven times under this playoff format, most of any track. Chase Elliott did it last year and won his first title by sweeping the final two races of the year. ... A win by Kyle Larson on Sunday would make him just the ninth different Cup driver in the Modern Era to win four or more consecutive races. Jimmie Johnson in 2017 was the last to win four straight.