Keselowski confident he can recover from huge NASCAR penalty 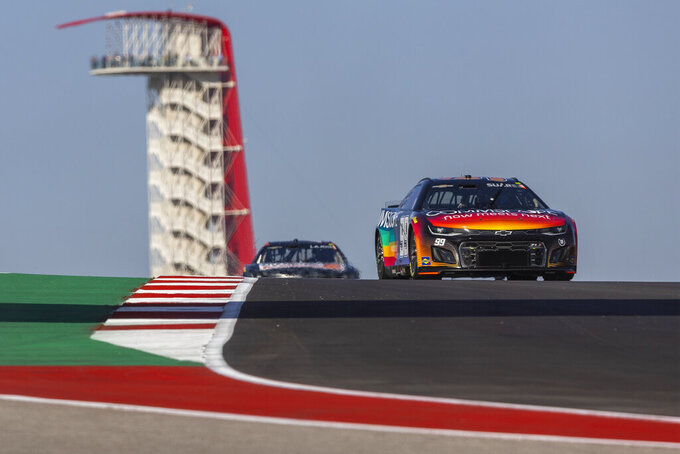 Daniel Suarez steers his car through Turn 10 during practice for the NASCAR Cup Series auto race at Circuit of the Americas, Saturday, March 26, 2022, in Austin, Texas. (AP Photo/Stephen Spillman)

AUSTIN, Texas (AP) — Brad Keselowski was optimistic he can overcome a knee-buckling penalty that potentially ended any championship chances a mere five races into his first season as a Cup team owner.

NASCAR this week said an inspection at its North Carolina facility uncovered an illegal modification to the No. 6 Ford — a major infraction under tightened rules for the new Next Gen racecar. The Next Gen is primarily a spec car comprised of vendor-supplied parts and NASCAR will not permit any tinkering.

Keselowski, now a co-owner of RFK Racing, was docked 100 points and plummeted from 16th in the current standings to 35th. He goes into Sunday's race at Circuit of the Americas as the lowest ranked full-time Cup Series driver.

“No, it’s not crippling. It’s not what we want. Nobody wants to be in this position,” Keselowski said after qualifying 26th on Saturday.

“We’re going to get out of this what we make of it. And we can use this as a moment to drown in our own tears, or get stronger and be better. I’m committed to the latter of the two.”

RFK was also docked 100 owner points on the No. 6 Ford, while crew chief Matt McCall was fined $100,000 and suspended for four Cup races. Should Keselowski recover to make the playoffs for a ninth consecutive season, the 2012 Cup champion will be docked 10 points at the reset.

Keselowski would not reveal what NASCAR has accused RFK Racing of doing to its car ahead of last Sunday's race at Atlanta, citing the appeal process. His car failed pre-race inspection at Atlanta and was chosen for a deeper teardown at NASCAR's R&D facility.

NASCAR has also not told the industry what part or modifications were found to be altered on the Ford, and NASCAR President Steve Phelps told The Associated Press that withholding the information was a decision made by competition officials. But Phelps reiterated that teams were warned during the offseason that a new punishment system would be severe.

"They knew what the penalties were up front for manipulation of a spec part,” Phelps said Saturday.

Denny Hamlin was the only driver in the garage to cop to knowing what RFK modified but said his information was only "hearsay." Others called on NASCAR for transparency.

“If it was that big of a deal, I think it should be public,” said Kevin Harvick.

Keselowski, who left Team Penske at the end of last season to buy a portion of Jack Roush's organization, said he's “learned more than I knew before the race weekend” about the No. 6 at Atlanta. His philosophy as a team owner aligns closer to Roger Penske, a no-nonsense boss who doesn't permit cheating.

“Obviously, it’s NASCAR’s job to put on a fair and equitable race for the competitors that meets the interests of the sport,” Keselowski said. “It’s our responsibility to fit in there.”

Ryan Blaney recovered from a spin in practice to win the pole. Blaney spun in Saturday morning practice and contact with the wall left a scratch on the back of the No. 12 Ford.

Team Penske had him ready to go when qualifying began and Blaney advanced into the final round, where his lap of 92.759 mph earned him the eighth pole of his career.

“I wouldn’t have thought we’d sit on the pole after I hit the fence,” Blaney said while praising NASCAR's new Next Gen racecar for its durability. “I appreciate the soft wall that was over there and the resilient race car.”

Daniel Suarez qualified second alongside Blaney in a Chevrolet for Trackhouse Racing. The Mexican driver anticipated a strong turnout of supporters at what's essentially a home race.

“This is one of the few races that my friends and family can actually come from home and drive here, so it’s amazing to have a lot of Mexican fans in the stands and in the pits,” said Suarez, who made Friday sponsor appearances at Austin-area schools and “was impressed with the amount of kids that were speaking to me in Spanish.”

Cole Custer qualified third in a Ford for Stewart-Haas Racing and will start next to Tyler Reddick in a Chevrolet from Richard Childress Racing. Alex Bowman was the highest-qualifying driver from Hendrick Motorsports at fifth, followed by Blaney teammate Joey Logano.

Christopher Bell in seventh was the top Toyota, one spot ahead of Joe Gibbs Racing teammate Hamlin. Justin Haley for Kaulig Racing and Austin Cindric of Penske completed the top 10.

FanDuel race favorite Chase Elliott, the defending race winner and the only one of the four Hendrick drivers without a win so far this year, qualified 12th.

Bubba Wallace said the hit he took in last week's late-race crash at Atlanta was the hardest of his life, but he would not reveal the force of the hit he recorded. ... Chase Elliott said he'd be interested in being part of the three-driver lineup for the 24 Hours of Le Mans collaboration between NASCAR and Hendrick Motorsports if he has the weekend off from the Cup Series. He said he would not skip the non-points All-Star race to compete. ... Denny Hamlin, meanwhile, said multiple teams are upset that NASCAR is doing the Le Mans project with Hendrick and Chevrolet because of additional testing it would provide Hendrick with the Next Gen. “I do not see any way possible they will not have an advantage.”