Jarett Andretti fulfills father's goal to get team to Rolex 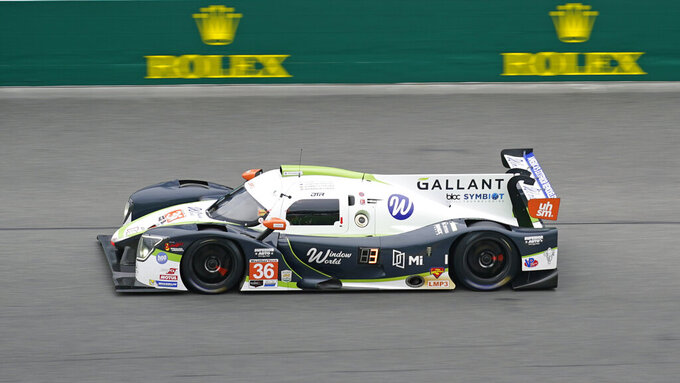 DAYTONA BEACH, Fla. (AP) — Jarett Andretti carved his own path in motorsports alongside his father, where the two began in sprint cars with aspirations to build a bigger program they could take to the next level.

John Andretti and his son eventually set their sights on sports cars and building a program that would someday race in the Rolex 24 at Daytona. They got serious about the effort in 2019 but it took three years to achieve their dream.

Jarett Andretti started from the pole Saturday in the LMP3 class and held the lead for roughly three hours before turning the car over to his teammate. It marked the debut of Andretti Autosport in North America's most prestigious race; Mario Andretti won the race in 1972, Michael Andretti and John Andretti entered it three times and Marco Andretti ran it once, but never for the eponymous family team.

The achievement was bittersweet for Jarett Andretti, though. The checkered flag will fall Sunday on the two-year anniversary of his father's death. John Andretti died in 2020 of colon cancer at 56 years old.

“It's what Dad and I started in his last year, he was like ‘Let’s go sports car racing,'" Andretti told The Associated Press. “It's got a lot of my dad's fingerprints on it.”

He credited Michael Andretti, owner of Andretti Autosport and his late father's first cousin, for helping Jarett move the program into IMSA's top series. The team began last year in the Michelin Pilot Challenge before moving up to the WeatherTech series midway through the season.

And it was Michael Andretti as well as Jarett's mother, Nancy, who talked him out of continuing his sprint car career to focus on the IMSA effort.

“He was like ‘OK, you’re going to go to WeatherTech and you're going to be running these races,' Michael is like ‘You can’t go somewhere the weekend before and get hurt in a sprint car and not be ready to race. If I am going to help you, I want to make sure you are here and focused,'” Jarett Andretti said.

When his debut finally happened, Mario Andretti was at Daytona on Saturday to watch as one of the grand marshals. Mario Andretti is the twin brother of Jarett's late grandfather, Aldo.

“It means a great deal to the family. Along with my twin brother, Aldo, we started this mess and as it turns out there are four drivers on each side of the family and now we are on the third generation on both ends,” Mario Andretti told AP. “John just coached Jarett right through the sprint cars and into sports cars and Michael is part of the structure of the team. We love this, this is our life, this sport has been our life.”

After his stint, Jarett Andretti said he'd let Mario drive the car anytime he wants and is confident the 81-year-old could successfully complete a solid three-hour stint. Mario Andretti still drives the IndyCar two-seater at every race.

“He's pretty fit and he's just mentally sharp, and when you are mentally sharp, the physicality of it doesn't make as much of a difference,” Jarett Andretti said. “He still drives the two-seater hard, so he can drive for me anytime he wants.”

Ford Performance will return to top-level GT racing in 2024 with a factory-backed Mustang, the sports car that created the pony car segment.

Ford pulled out IMSA sports car competition after the 2019 season but announced at Daytona International Speedway that it will return in the GTD Pro class with a two-car factory effort run by Multimatic Motorsports. Ford had considered entering the top class of sports car racing — it will be called LMDh beginning next season — but instead chose to remain in the production-based category.

A street version of the Mustang GT3 will also be available to customers for purchase.

Joey Hand, who earlier this week was named the road course driver in NASCAR for Rick Ware Racing in a Ford-backed car, will help develop the Mustang GT3. Hand was part of the Ford lineup that won Le Mans in 2016.

The race drivers were not announced.

“As much as I like to compete and win on the track, I also enjoy being part of the development of new race vehicles like this Mustang," said Hand. "We did a lot of testing with the Ford GT program, so it will be great to be working again with a lot of the same people at Ford and Multimatic as we get this car ready for competition.”