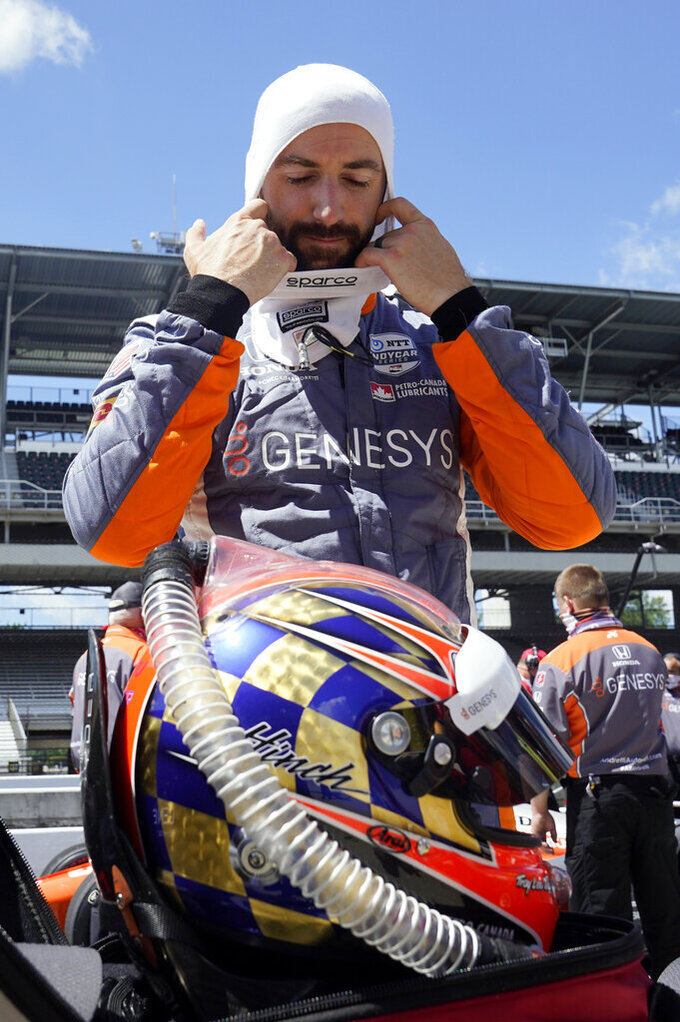 FILE- In this Aug. 16, 2020, file photo, James Hinchcliffe, of Canada, takes off his balaclava after qualifying for the Indianapolis 500 auto race at the Indianapolis Motor Speedway in Indianapolis. Hinchcliffe will return to Andretti Autosport for the final three races of the season to fill the seat left vacant when Zach Veach stepped out of the car earlier this week, Andretti Autosport announced Friday, Sept. 25, 2020. (AP Photo/Darron Cummings, File)

INDIANAPOLIS (AP) — James Hinchcliffe will return to Andretti Autosport for the final three races of the season to fill the seat left vacant this week by Zach Veach.

Andretti Autosport on Friday said Hinchcliffe will drive the No. 26 at next week's doubleheader at Indianapolis and the October season finale at St. Petersburg. Hinchcliffe ran three races earlier this year for Andretti, where he drove three seasons from 2012 through 2014.

“It’s always unfortunate to have to change drivers this far into a season, but we have to look at finishing the year the best we can for the 26 team and start evaluating and looking at options for 2021," said team owner Michael Andretti. "James has an existing relationship with our team that we’d love to build on and it makes the most sense for him to step in for these last three races.”

Veach gave up his seat when Andretti told him he was not being renewed for next season. He agreed to step out of the car to give the organization the chance to prepare for 2021. Veach has spent three seasons with Andretti.

“I know, probably better than most, what Zach is feeling right now, and I have to say that he has handled everything about as class act as you can," said Hinchcliffe. “I’ve known Zach as a teammate, before that as a colleague and even before that as a friend, and he is a guy that I respect in every way. I know he is a fighter and will fight back to where he wants to be.”

Hinchcliffe learned late last season that Sam Schmidt was not bringing him back to the rebranded Arrow McLaren SP organization despite still having a year on his contract. He put together a partial deal with Andretti and has also been doing television work with NBC Sports.

Hinchcliffe finished seventh in the Indianapolis 500 last month with Andretti. He's competed on two ovals and the road course at Indy this year. The final three races are on road courses.

“I obviously haven’t been on a road course in a while, but at least the last time I was, it was here at IMS," Hinchcliffe said. "Hopefully that puts us in a good position to go out there and have a strong weekend.”