Grosjean moves to IndyCar with Coyne after 9 seasons in F1 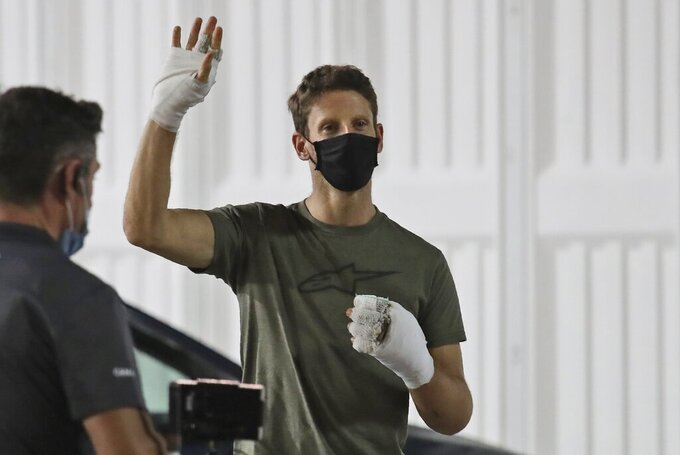 Romain Grosjean never doubted he'd race again after escaping a fiery crash in Bahrain with serious burns to his hands. Convincing his three young children that it was the right thing for him to do took some work.

“Initially they did not want me to race anymore and they told me to do every other job you can imagine — tennis player, artist, engineer, cook, you name it,” Grosjean said. “But I explained to them that I was the dad that I was because I had racing and that was a big, big part of my life and it made me happy.”

Grosjean on Wednesday was named the new driver at Dale Coyne Racing for 2021, where the Frenchman will become the latest Formula One driver to migrate to IndyCar. He'll race the 14 road and street courses on the schedule in the No. 51 with Coyne to announce plans for the four oval events at a later date.

Grosjean's nine year F1 career came to an abrupt end in a harrowing November crash in Bahrain in which he pulled himself from a fireball of wreckage in a real-time spectacle of the dangers of motorsports. His oldest child is 7 and wasn't sold on Grosjean returning to racing in a car he's never driven and a brand new series in the United States.

“We started chatting about it and they asked a lot of questions about the safety in the cars, the speed, and I told them as much as I could,” Grosjean told The Associated Press by telephone from France. “Then I got them involved in designing my helmet and the oldest one, Sasha, I was training my neck the other day and he came and said ‘Daddy, I am happy you are training your neck. That means you are going racing.'

“It was a very small sentence for him, but it was a lot of meaning for me.”

Grosjean, who missed the final two races of the F1 season and was not retained by American team Haas, will at last be back in a car Feb. 22 during the IndyCar test at Barber Motorsports Park in Alabama. His hands are still healing but he expects to be able to put driving gloves on next week without fear of disrupting the scabbing.

Even after the crash Grosjean continued his plans to move to IndyCar. He'd been inquiring with teams since Haas declined to retain both Grosjean and Kevin Magnussen and had been convinced that IndyCar was the right move.

Grosjean joins Marcus Ericsson and Alexander Rossi as recent drivers to leave Europe for IndyCar. He talked several times with Ericsson about the switch "because he knows both worlds and I asked what am I going to go into? What I am going to expect?”

Ericsson is entering his third season in the series and assured Grosjean “you will love it” and quickly embrace the tight IndyCar community.

“Obviously some of the luxury that you have in Formula One is not there, but it is much more family-style. He said the family are very much welcome at the racetrack, which is not always the case in Formula One,” Grosjean said. “You can have your RV and stay with other drivers and have your barbeque overnight. It’s going to be a new experience.”

He's never driven an Indy car and his only experience has been on his simulator at home. But he's watched every race from the past three years on IndyCar's YouTube channel, often setting it up to view while training on his bike at home.

Grosjean has tried to make comparisons from the F1 race in Austin to IndyCar's two events at the Texas track. The closest car he's driven to the Indy car, he believes, was in the GP2 Series a decade ago.

“In the end, it's got four wheels, one steering wheel, one seat, some aerodynamics," Grosjean said. “I am confident we can get on top of things, even though there will be a learning curve. And I'm going to be a rookie, for the first time in a long time.”

Grosjean technically replaces Alex Palou, a rookie last season who then moved to Chip Ganassi Racing. DCR last week announced Ed Jones is returning to IndyCar this season in the car Coyne runs with Jimmy Vasser and James Sullivan, and Coyne bolstered a relationship with Rick Ware Racing on the No. 51 that Grosjean will drive.

Coyne had been talking to Grosjean even before the Bahrain crash about the move to IndyCar.

“We’re very happy that he has chosen to pursue his career with us and excited to welcome a driver with his pedigree to America, the series and our team," Coyne said.

The Coyne organization has not won an IndyCar race since Sebastien Bourdais won the 2018 season opener, but Grosjean is excited to join a team that has a chance in each race.

Haas is not a race-winning contender in F1 and Grosjean texted this week with former teammate Magnussen about the thrill of being competitive again. Magnussen moved from F1 to IMSA sports cars with Ganassi and was in contention for the victory last weekend at the Rolex 24 at Daytona.