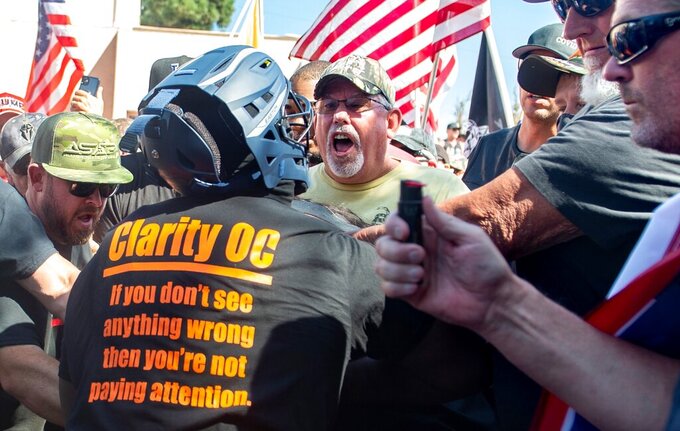 Black Lives Matter protesters and counter protesters clash in Yorba Linda, Calif., Saturday, Sept. 26, 2020. Police eventually declared the event an unlawful gathering and cleared the streets near Yorba Linda and Imperial. Authorities said people were struck by a car and injured during a Black Lives Matter protest and counter-protest about 30 miles southeast of Los Angeles. Orange County Sheriff's Department spokeswoman Carrie Braun says the injured were transported to a hospital with non-life-threatening injuries and the driver was detained. (Mindy Schauer/The Orange County Register via AP)

LOS ANGELES (AP) — The organizer of a Southern California rally against police brutality and racism was charged with attempted murder Tuesday for driving her car into counterprotesters and running over a woman's head.

Tatiana Turner deliberately drove into a crowd of President Donald Trump's supporters with the intent to kill the woman and also seriously injured a man who broke his leg, Orange County prosecutors said.

“She positioned her vehicle to be used as a backup weapon and she used that vehicle as a deadly weapon, willing to injure and kill those who stood in her way,” District Attorney Todd Spitzer said in a statement.

A defense lawyer said Turner tried unsuccessfully to get help from deputies Saturday in Yorba Linda after her group was overwhelmed by a hostile crowd.

Turner saw people with guns and feared for her life when she got into her car that was blocked by Trump supporters, attorney Ludlow Creary II said. She was trying to get away and didn't intend to hit anyone.

“There were actions that caused her to become fearful for her life and that’s when she accelerated,” Creary said.

Turner, 40, made her first appearance in court remotely from the jail and was ordered held on $1 million bail. A not guilty plea was entered on her behalf by her lawyer.

The incident is one of more than 100 where motorists have plowed into demonstrations since late May, following protests against police brutality that grew nationwide over the killing of George Floyd by a Minneapolis officer, according to Ari Weil, deputy director on the Chicago Project on Security and Threats at the University of Chicago.

The vast majority of those cases tallied by Weil involved motorists who ran into those demonstrating for causes aligned with the Black Lives Matter movement, Weil said. He knows of only one other instance where that wasn't the case when a man drove into a people rallying in support of police officers in Eaton, Colorado, in July.

“It’s a man bites dog case when compared to the usual pattern,” said Jody Armour, a law professor at the University of Southern California.

Armour said it may be difficult for prosecutors to prove Turner tried to kill someone because it requires showing she was more than just reckless or negligent.

“When you’re talking about attempted murder, you’re talking a requirement that the state prove that ... she drove into the crowd with the true purpose to cause someone’s death,” Armour said. “That says something about their motivations, their character, their state of mind. It’s a value judgment. It’s a moral judgment.”

Prosecutors are alleging just that. The felony complaint said Turner had the “specific intent to kill” the woman who was run over.

The victim has not been named. Authorities said she was hospitalized with major injuries and expected to survive.

Turner, who has a felony record for drug sales and domestic violence, is also charged with six counts of assault with a deadly weapon, including one count for causing great bodily injury, mayhem, and two counts of the use of pepper spray by a felon.

Turner’s group, Urban Organizers Coalition, had planned a peaceful march Saturday at the Yorba Linda Library, about 30 miles (48 kilometers) southeast of Los Angeles. But they were quickly outnumbered and threatened by the other group, Creary said.

The DA, however, referred to Turner's group as “professional militant organizers." Turner was seen in videos waving a baton and spraying what appeared to be pepper spray earlier in the protest. Some members of her group had helmets and riot shields.

Creary said the charges were excessive.

“In my opinion, it's a message to activists that go to OC," Creary said. "They want to let them know that they’re going to push to the full extent of the law against activists. Again, it's part of the hostile environment.”