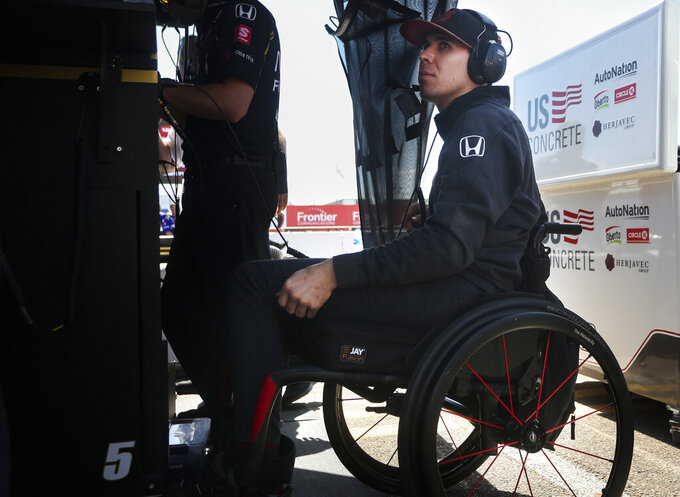 TORONTO (AP) — Robert Wickens made an emotional return to the race track Sunday with a parade lap in a car equipped with hand controls before the IndyCar race in Toronto.

Wickens suffered a spinal cord injury in a crash last August and his ceremonial lap around Exhibition Place was his first time on a race track since the devastating accident.

Wickens drove a $160,000 Acura NSX modified by Arrow to allow the Canadian native to drive with hand controls.

"I am over the moon with how crazy this is," Wickens said before he got in the car. "This is just incredible. The support I've received the last 11 months is unbelievable."

His passenger in the car was fiance Karli Woods, and Wickens has been determined to be able to dance at least once with Woods at their wedding later this year.

"We've been through so much together, it's only fitting we do this together," he said of the parade lap.

The car was equipped with a camera that caught both Woods' initial trepidation, then wide smiles from the couple as they heard the roar from the grandstands. Wickens raised his arm out to salute the fans and then gave the command to start the race.

"Future drivers of mine, start your engines," Wickens said from inside the cockpit.

Wickens is adamant he will race again.