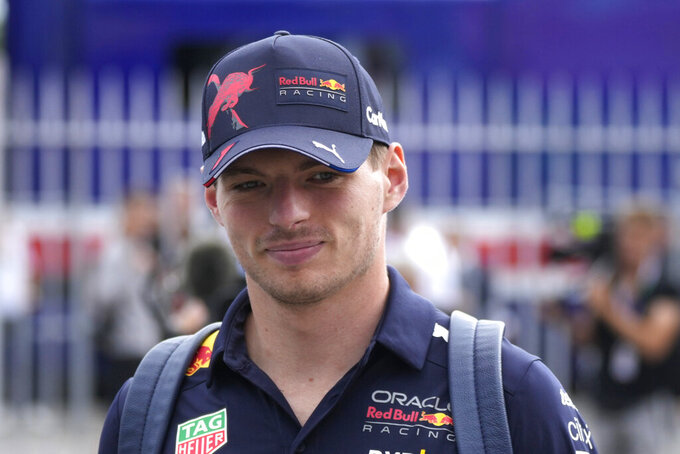 Red Bull driver Max Verstappen of the Netherlands arrives prior to the first free practice at the Monza racetrack, in Monza, Italy, Friday, Sept. 9, 2022. The Formula one race will be held on Sunday. (AP Photo/Luca Bruno)

MILAN (AP) — Formula One leader Max Verstappen is feeling unusually optimistic about his chances of finally earning a good result at the Italian Grand Prix.

Monza is the only circuit where Verstappen has never even finished on the podium. The Red Bull driver’s best result is fifth in 2018.

Verstappen did not even manage to finish the previous two Italian GPs; his retirement last year came after a spectacular crash with title rival Lewis Hamilton, who was also forced to abandon the race.

However, the Dutch driver will take to the track on Sunday on the back of four straight wins and with his Red Bull having superior straight-line speed all season, which is an advantage on one of F1’s fastest tracks.

“We’ve always been slow on the straights, so then it’s normal when you get here that it’s never going to be a good weekend,” Verstappen said when asked about his previous problems at Monza. “And besides that, you know, a few technical issues as well around this track and we always had to take engine penalties here as well. So, naturally, it’s never going to be amazing.

“But now I think with straight-line speed, it can be a completely different weekend for us.”

Verstappen, however, will start the grand prix no higher than sixth after he was one of a number of drivers hit by grid penalties for changing engine parts. He was given a five-place drop, while Hamilton and Yuki Tsunoda will start from the back of the grid.

Verstappen was also issued penalties before the Belgian GP two weeks ago and started 14th but surged through the field to victory.

“I’m always relaxed,” Verstappen said. “Even last year, you know, when the lead wasn’t that big, I think we always felt good and confident. But of course, with the lead we have now, yeah it’s nice and it’s great, but we still want to win more races."

Verstappen won in front of his home fans at the Dutch GP last Sunday and Ferrari will be hoping its passionate red-clad tifosi equally have something to celebrate this weekend on its home track.

Leclerc was on the top step of Monza's iconic podium in 2019 but that was Ferrari's only success since 2010 and he's not expecting to repeat that this year, especially after another error-strewn showing from the team at Zandvoort.

“On paper at least, it looks like a difficult weekend,” Leclerc said. “We expect Red Bull to be stronger, the track characteristics doesn’t fit exactly our car, but we’ve had some good and bad surprises this year so hopefully this is one of the good ones and we overperform.

“Comparing to Red Bull specially … we are slower down the straights. Their main strength this year is straight-line speed, we seem to be a bit quicker in the corners. At tracks like here, it’s not enough to gain back the advantage that they have on the straights.”

There was positive news for Ferrari on Friday, however, as it topped the leaderboard in both practices.

Sainz was quickest in the second session, 0.143 seconds ahead of Verstappen and 0.193 ahead of Leclerc, who was fastest in the first session in a Ferrari one-two.

George Russell was third fastest in the first practice, ahead of Mercedes teammate Hamilton and Verstappen in fifth.

He was fifth in the second session, just behind Lando Norris but quicker than Pérez and Hamilton.

The session was briefly red-flagged after Mick Schumacher ground to a halt about halfway through, with a power unit issue subsequently being confirmed.

There was a minute's silence ahead of the start in memory of Queen Elizabeth II, who died on Thursday at the age of 96.

Ferrari also had a sticker on its cars in tribute to the British monarch.