Team Penske's Power to start on pole at IndyCar Classic 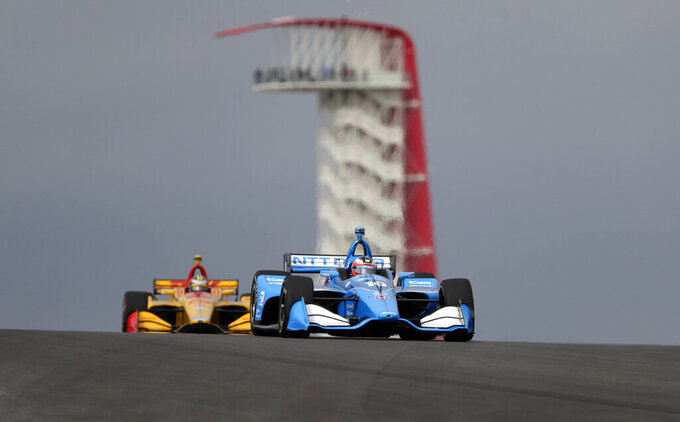 Felix Rosenqvist (10), of Sweden, and Ryan Hunter-Reay (28), of United States, steer through a turn during an open practice session for the IndyCar Classic auto race, Saturday, March 23, 2019, in Austin, Texas. (AP Photo/Eric Gay)

AUSTIN, Texas (AP) — Will Power topped qualifying once again. Now he has a chance to turn pole position into a tidy little payday if he can drive to another victory.

The Team Penske star earned career pole No. 56 Saturday at the inaugural IndyCar Classic at the Circuit of the Americas, edging Andretti Autosport teammates Alexander Rossi and Ryan Hunter-Reay.

Sixteen of Power's 35 career victories have come from pole position. Do it again Sunday and he'll earn a $100,000 bonus. But the Australian said he's eying an even bigger prize: a season championship to match his 2014 IndyCar crown.

Power started on pole position at the season-opening race in St. Petersburg but finished third behind winner and Penske teammate Josef Newgarden.

The top three had to dig deep for the final laps to knock rookies Colton Herta of Harding Steinbrenner Racing and Felix Rosenqvist of Chip Ganassi Racing from the top spots. Herta will start fourth and Rosenqvist fifth.

Herta was the breakout driver at preseason testing here and briefly held pole position until the final seconds of qualifying. He had trouble Friday when his engine blew early in practice, putting pressure on the team just to get him back on the track.

"To show we had the pace during qualifying was reassuring. I know we can back it up in the race," Herta said.

IndyCar is racing for the first time at the track built for Formula One in 2012. After two days of preseason testing last month and two days of practice and qualifying this week, the drivers think the 3.41-mile track, one of the longest of the IndyCar season, could produce some wild racing as tires wear out quickly with no track limits in the turns.

The biggest impact will be on Turn 19, where drivers will be allowed to swing wide into the runoff area. That will help cut lap times by 0.2 to 0.3 seconds.

Some drivers like it. Some don't. Several had trouble negotiating the turn on Saturday.

"I'm not a fan of track limits. That's why I like racing in America, because you don't really have track limits. You go off in this grass, gravel or wall," Rosenqvist said. "I'm kind of a fan for opening it up. You know it's going to be the same for everyone. They're not going to look at this guy was one millimeter over the line or not, which is a bit ridiculous."

Team Penske's Simon Pagenaud questioned whether it's safe. His qualifying session ended early after Tony Kanaan ran wide into the gravel on Turn 19 to bring out a red flag.

"The track was designed a certain way. I think there was a reason," Pagenaud said. "It's really a tough corner when you have track limits. When you don't have track limits, running off wide, you're actually facing the guardrail. It's not as safe, not designed that way. It's actually bad on the car as well because you're really bottoming pretty hard."

Other items from Austin:

Herta and Rosenqvist weren't the only rookies making a push deep into qualifying Saturday.

Santino Ferrucci of Dale Coyne Racing and Carlin's Patricio O'Ward both made it past the opening rounds. O'Ward, last season's Indy Lights champion, will start eighth in his IndyCar season debut. Ferrucci will start 11th.

The circuit veterans were impressed by the youngsters. Power, Hunter-Reay and Scott Dixon, who have won seven IndyCar titles between them, are all 38 years old. Herta is 18. O'Ward is 19.

"I think it's great for the future of the sport," said Dixon, who will start sixth Sunday. "Some of us are getting pretty old."

The 2016 champion has seen his qualifying in the first two races doomed by red flags in the early sessions. The Frenchman will start 22nd Sunday. He started 13th in St. Petersburg and raced his way to finish seventh.

"I need to find a lucky charm or something," Pagenaud said. "It's really frustrating to start at the back like this. I've got a good car."