Spire Motorsports to run LaJoie and Ty Dillon in 2023 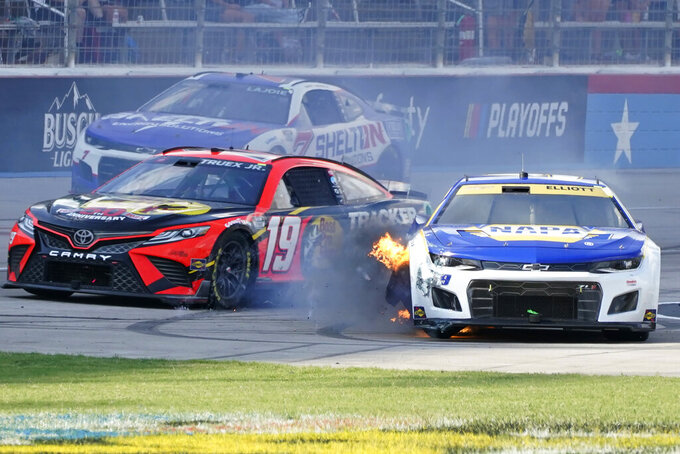 Spire Motorsports on Tuesday announced a two-car lineup with drivers Corey LaJoie and Ty Dillon for 2023, the first season the team will run both its Chevrolets with full-time drivers.

LaJoie will return to the No. 7 for a third season and remain paired with crew chief Ryan Sparks, who was also promoted to director of competition.

Dillon will take over the No. 77, which has been driven by four different drivers this season. Spire co-owner Jeff Dickerson said hiring Dillon to transition the No. 77 into a championship-eligible entry is part of the team's calculated growth.

Spire Motorsports was founded in 2018 by Dickerson and T.J. Puchyr, who purchased the championship-winning charter from Barney Visser when Visser closed Furniture Row Racing. The duo sparked movement in NASCAR's charter system and created a path for new ownership.

Since Spire bought the charter needed to guarantee entry into every Cup race for $6 million, Trackhouse Racing, Kaulig Racing and 23XI Racing have all entered the series and 23XI paid a record $13.5 million last year for its second charter.

Kaulig, meanwhile, purchased two charters from Spire, which recognized the market trends early and stockpiled charters on the cheap, then leased or sold them to other teams.

“There’s little doubt that we raised some eyebrows when we entered the sport as race-team owners,” said Dickerson. “We knew that we needed to learn how to crawl before we attempted to walk and eventually run. The next step in our progression is to add an equally capable full-time driver for the No. 77 team and we’ve found just that individual in Ty Dillon."

Dillon, who will be paired with crew chief Kevin Bellicourt, was told by Petty GMS this summer he was not being brought back for a second season. The grandson of Richard Childress and younger brother of Daytona 500 winner Austin Dillon has bounced around teams in both the Cup and Xfinity Series.

“I’m thankful for this opportunity, a new beginning with a very hungry team that is excited for the future,” said Dillon. “Spire Motorsports has been growing year after year. The organization is heading in the right direction and I’m excited to be a part of bringing the No. 77 up to where Corey has been running. Hopefully, we raise the whole level of competition together."

Spire has one win — by Justin Haley in the rain-shortened 2019 summer race at Daytona — in 210 Cup Series starts.

LaJoie, a third generation racer, scored a career-best, fifth-place at Atlanta Motor Speedway this season. He has one top-five and two top-10 finishes since joining Spire.

“With another year under our belts and a notebook on the new car, I know we can have a solid season and get that first win," LaJoie said of his return. “It’s cool my buddy Ty is joining us as well. It will be nice to have a full-time teammate in the No. 77 to work with.”