Rossi shuts down free agency talk to focus on Indy 500 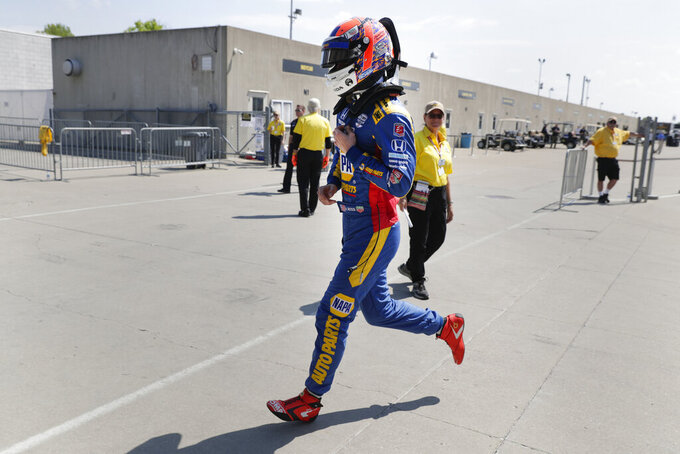 Alexander Rossi runs to the pit area during practice for the Indianapolis 500 IndyCar auto race at Indianapolis Motor Speedway, Wednesday, May 15, 2019, in Indianapolis. (AP Photo/Michael Conroy) 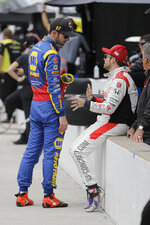 INDIANAPOLIS (AP) — Alexander Rossi's long month at home in Indianapolis got off to a rough start when a thief snatched a package off his front porch.

If he has his way, it will be the only hiccup in his push for a second Indianapolis 500 victory.

"The desire to win again is pretty strong," said Rossi. "So it's not hard to come back and want to do it again."

Rossi was the surprise winner in 2016 as a rookie in the 100th running of the historic race and the victory cemented him as one of IndyCar's budding stars. The California native wasn't well known in the United States and had spent most of his career chasing a seat in Formula One.

But that Indy 500 victory instantly made him a top contender in the series. Three full seasons later, Rossi has six career victories and finished second in the championship race last year to Scott Dixon.

He turns 28 at the end of this season, a contract year for Rossi at Andretti Autosport amid speculation about his future. Rossi ran the Rolex 24 at Daytona with Team Penske, which could have an opening next season if it doesn't keep Simon Pagenaud. Rossi is not interested in discussing speculation as he prepares for the May 26 race.

"Your guess is as good as mine, to be honest," Rossi told The Associated Press when asked about his 2020 plans.

"We're just trying to get through this month and get through the year. I feel like any conversations and things about the future are pretty irrelevant and very distracting for the goal of what we're trying to accomplish," he said. "That's to win a championship and to try and get some redemption on what we felt we kind of gave away last year. So that's our main focus, my main priority, and I hope that everyone else in the organization is the same way."

Rossi has had an uneventful week of practice and worked through his checklist so quickly Wednesday he was able to watch the afternoon session in street clothes atop teammate Marco Andretti's pit stand. Andretti is a five-car team at Indy and Rossi said it gives the organization the luxury to "divide and conquer" all the data.

"It's an open book, so we share everything, good, bad, indifferent, during the day, and especially the evening. We'll have a big, round-table discussion," Rossi said. "It's one of the things that really surprised me the first time that I really came here and was driving for Andretti, kind of the way that they do that."

Rossi's only complaint so far in May is that someone brazenly stole that package, a theft caught on his doorbell camera. He posted the footage on social media and contacted Amazon, which he praised for immediately sending him a replacement.

The robbery will go unsolved because he didn't file a police report.

"Apparently the police don't investigate things unless you file a report," Rossi said. "The guy stole an internet router. That's the riskiest thing to do. The amount of things that myself and my girlfriend order from Amazon, it's like paper towels — you can go to jail for stealing paper towels. It's so stupid."