LaJoie wants to prove strong end at Atlanta was no fluke 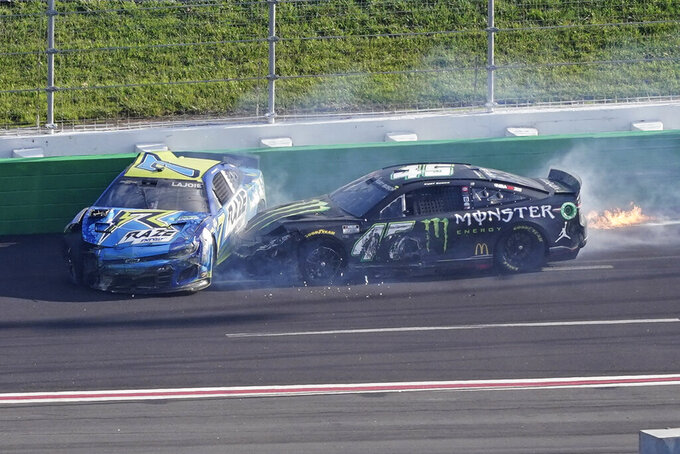 Larson wrapped up the 2012 NASCAR K&N Pro Series East championship in the same race a 16-year-old rookie named Tyler Reddick made his debut.

All drivers with so much promise.

Check it out a decade later: Larson is the reigning NASCAR Cup Series champion and widely considered the best pure driver in the sport. Elliott won the 2020 Cup title and has a lock on the most popular driver award. Reddick just won his first Cup race and is rising star so in demand that 23XI Racing this week signed him to a deal that doesn’t start until 2024.

The 30-year-old driver spent most of his career scuffling through driving for underfunded or upstart teams and had only one top-five finish over his first 182 career starts. But in start No. 183 Sunday at Atlanta Motor Speedway, LaJoie led the field from the inside lane on a restart with three laps left in the race. His first career win in sight, Elliott slid up the banking to cut off his challenger. LaJoie ran out of room and smashed the outside wall. He settled for 21st, a number that hardly shows how agonizingly close LaJoie was to beating Elliott for the win and taking the checkered flag for the low-budget Spire Motorsports team.

“I wish I’d been sitting here looking at the trophy all week,” LaJoie said. “I know that you’re only as good as your last race, and you roll right into Loudon and then everybody forgets about it. For me, it’s a lot of confidence. Because it’s one thing yourself that you can do it if you’re in the right opportunity over the last four, five years. A lot of it, sometimes feels fabricated, whether it’s to yourself, whether your beliefs are to be able to drive a race car, you start to question if you can do that. If you’re ever going to get the chance that we had on Sunday afternoon to win a Cup race.”

LaJoie led 19 laps in Atlanta, a modest total for most star drivers, but consider, he’s now led 46 his entire Cup career. Is he a one-weekend wonder or can LaJoie — buried in 31st in the points standings — race for a win Sunday at New Hampshire Motor Speedway? Well, his average finish is 29.6 in seven career starts. LaJoie, who has spent years trying to find a competitive race team to prove he can contend in elite equipment, now has to hope the near-miss in Atlanta was a springboard toward that first win and not just one more lost opportunity he won’t sniff again.

“I think the biggest feeling I took away over the weekend was just confidence in the fact that I can do it and Spire is capable of doing it, on occasion,” LaJoie said.

On occasion. Not exactly a ringing endorsement for a race team that lucked into one rain-shorted win in 2019 but otherwise has six top-10 finishes in 182 starts. LaJoie conceded his No. 7 Chevrolet team needed a flawless race most weekends just to finish inside the top 20.

“When we have all the air in the tires, and tires in the car and the steering works and the oil lines don’t get frayed and have holes in them or water lines, we finish in the top 20,” LaJoie said. “For us as a team to finish in the top 20, if you don’t have issues, is like a pretty big deal. You’re beating a handful of teams that you never should be.”

Such is the life of a backmarker. LaJoie said he had to consider a potential 10th through 15th finish this weekend at New Hampshire “as much of a win as taking home a trophy.”

Austin Cindric, Chase Briscoe, Ross Chastain, Daniel Suarez and Reddick all won their first Cup races this season and LaJoie nearly joined the group with the biggest shocker of ’em all.

But Atlanta was a reminder of the old days when LaJoie once ran with — and beat — so many of NASCAR’s future stars.

“If anybody looks at me any differently after Sunday, than they did before Sunday, they never really were paying attention in the first place,” he said.

Ty Dillon is done at GMS Motorsports after only one season.

Dillon tweeted on Friday “we have mutually agreed to go our separate ways” after a season in which he has yet to finish better than 10th. The team sent a similar tweet that read it was “focused on strong runs and getting the No. 42 Chevy Camaro to victory lane.”

Dillon is 27th in points and winless in 185 career Cup starts.

The team did not announce a replacement for Dillon in 2023.

The tribe has spoken. Julia Landauer will make her Xfinity Series debut Saturday at New Hampshire.

The 30-year-old Landauer, a 2012 contestant on “Survivor: Caramoan,” has struggled like many prospects to find her way to race in one on NASCAR's three national series. She started racing go-karts when she was 10 years old and never stopped racing through college and found rides throughout the world, even the European NASCAR Whelen Series.

So what has kept her going through the years?

“Maybe a little craziness, maybe a little stubbornness, maybe not wanting to find other types of work,” she said. “It's so exciting for me to make all the pieces of racing work.”

Kyle Busch is still waiting to see if Joe Gibbs Racing can find the sponsorship money to keep the two-time Cup Series champion. M&M Mars has sponsored Busch since he joined the Gibbs organization in 2008, but the company is pulling its NASCAR marketing spend at the end of this season. JGR officials and Toyota, the team’s manufacturer, have remained adamant will return to the team next season.

“There’s no an absolute when it comes to this issue,” said David Wilson, president of Toyota Racing Development. “It’s a tough sport and sponsorship is critical to our long-term success across the board. We’re working diligently, with hand-in-glove, with (JGR) and Kyle, obviously. We’re acting in good faith and we’re going to continue to do so.”

Ryan Blaney is a 6-1 favorite to win Sunday, per FanDuel Sportsbook. Busch and Joey Logano are next at 7-1 to win the 301-mile race.