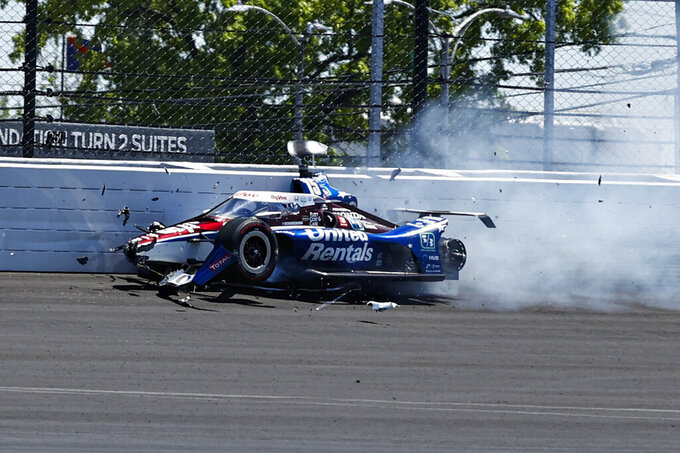 Graham Rahal hits the wall in Turn 2 after losing a tire during the Indianapolis 500 auto race at Indianapolis Motor Speedway in Indianapolis, Sunday, May 30, 2021. (AP Photo/Rob Baker)

INDIANAPOLIS (AP) — One minute, Graham Rahal was a serious Indianapolis 500 contender. The next, he was hitting his helmet in disbelief.

And just that quickly, the 32-year-old American's chance ended.

Rahal entered the pits with the lead as Lap 119 approached but when he returned to the oval, a loose left rear tire fell off. The pit-row miscue sent the No. 15 Honda spinning hard into the second turn wall as the tire bounced into the front of Conor Daly's oncoming car.

“We were cruising," a frustrated Rahal said after being checked and released from the infield care center. “We had it today and like I said, I'm just sorry we didn’t win this thing because we should have."

Rahal had positioned himself to join Al Unser and Al Unser Jr. as the only father-son tandems to win the 500 victories. Bobby Rahal was the 1986 race winner.

After starting 18th with a four-lap average of 230.521 mph, Rahal made his move forward strategically.

Unlike previous Indy winners Scott Dixon, the pole-sitter, Simon Pagenaud and Alexander Rossi, Rahal avoided the wild first round of pit stops that forced the other three to the back of the field for having to make emergency stops after a crash closed pit row.

And though he made only three passes, Rahal was conserved enough fuel while running fast enough to consistently stay in the top 10 and make his way back to the top rung for the third cycle of pit stops.

This time, though, the rear tire changer didn't get the wheel tightened and it rolled off as Rahal started down the warmup lane. The bouncing wheel appeared to hit the nose of Daly's car, sending it bouncing high into the air and away from Daly's head.

The first round of pit stops had a major impact on the race.

Three-time 500 pole winner Ed Carpenter was running in the top five when he came in and stalled the No. 20 Chevrolet, costing him precious seconds. A few minutes later, Stefan Wilson brought the No. 25 Honda in too fast and locked up the brakes, sending the car spinning into the outside pit wall after just 32 laps.

“Got called into the pit a little late,” Wilson said. “Just devastated. This is not how I wanted it to end.”

A few minutes after that, with the pits closed, eight cars had to make emergency stops including the ones driven by pole-winner and points leader Scott Dixon, 2019 Indy winner Simon Pagenaud and 2016 Indy winner Alexander Rossi. All three were sent to the back of the field for the restart.

After struggling on qualifying weekend, Team Penske's problems returned Sunday — even before the race started.

First, Pagenaud's crew on the No. 22 Chevrolet had to repair a leak in the coolant system.

Then Will Power's No. 12 car wouldn't start as the other cars started the parade laps. After it finally fired, the Aussie driver quickly started picking his way through traffic, climbing as high as No. 6 with 50 laps to go, only to see his brake pressure fail three laps later. It sent him spinning on pit row, knocking him out of contention.

“I just made a simple mistake, didn’t quite pump my brakes right and couldn’t pull up in time," McLaughlin said. “Obviously, pretty stoked to get rookie of the year but at the same point, like I said, a little bittersweet."

Pagenaud wound up third — the only top-10 finisher in Roger Penske's four-car stable.

While Helio Castroneves won the race as a partner with Michael Andretti's technology team and Alex Palou finished second for Chip Ganassi Racing, the other eight drivers on two of IndyCar's largest teams struggled.

Tony Kanaan had the next-best finish for Ganassi (10th). One teammate, Dixon, fell out of contention early while the fourth, Marcus Ericsson, was 11th.

Andretti's top finisher was Colton Herta in 16th. Wilson was the first car out of the race, Marco Andretti wound up 19th, James Hinchcliffe was 21st, Ryan Hunter-Reay was 22nd after contending early in addition to Rossi's tough day.

“We were too trimmed," Marco Andretti said. “We had a vibration on that last set of tires and then we came out in traffic. So, we just held status quo in a track position race.”

De Silvestro spun on pit road, derailing what had been a solid race that had her running in the high 20s. It was her first Indy start since 2015.

Beth Paretta, running a team backed by Roger Penske as part of his push for diversity, had four female crew members climb over the wall during de Silvestro's stops.

Paretta Autosport generated as much attention as any team in the field. Paretta has tried to hire women in all facets of the operation — competition, administration, logistics, marketing and public relations. IndyCar believes its a blueprint for the future of the sport and Paretta wants to remain part of the future.

“We didn’t come this far only to come this far,” she said. “Everything has just been beyond my expectations. The support from fans, from the fellow teams in the paddock, the series, that’s really made us feel welcome. I think that’s really helped a lot.”