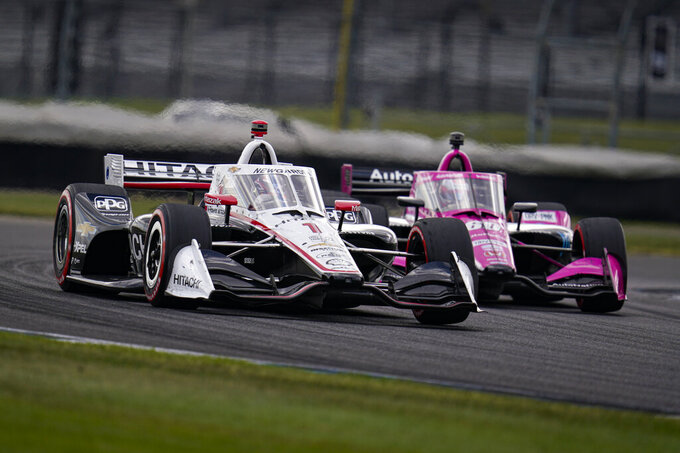 INDIANAPOLIS (AP) — Scott Dixon looked invincible in the first half of this IndyCar season.

He won the first three races before ceding the fourth to Chip Ganassi Racing teammate Felix Rosenqvist. Runner-up finishes at Iowa and in the Indianapolis 500 gave Dixon five top-twos in seven races, and a win at St. Louis extended the streak to six of eight.

Then everything turned on one of the greatest drivers of his generation and, suddenly, a 96-point lead dwindled steadily down to 32. Now, the Iceman needs everything he can muster to clinch his sixth IndyCar title.

“It's still good to be on the leading side of it and we still have a pretty good window," Dixon said Saturday after a finishing eighth at Indianapolis. “But we've definitely got our work cut out."

There's no doubt about it after the struggles of the last two race weekends.

In the first race at Mid-Ohio, Dixon qualified 17th and finished 10th, his second-worst showing all season. The next day he qualified third, but an early spin in the first turn dropped him to 10th again, allowing defending champion Josef Newgarden to cut the deficit to 72 points.

The trouble continued at Indy.

While Newgarden picked up a bonus point Thursday by qualifying on the front row for the first of two races, Dixon caught a bad break when Takuma Sato's spin into the gravel pit ended his group's session prematurely. He started 12th in the 25-car field.

On Saturday, there were more problems when Newgarden weaved his way through the field from the No. 9 starting spot to a fourth-place finish. Meanwhile, Dixon, who started 15th, spent the day hanging onto a loose car that was damaged early in the race. Dixon managed to finish eight, but the gap is now just 32 points with the Oct. 25 season finale at St. Petersburg looming.

“We're going to St. Pete to try and win a championship," Newgarden said after the third and final race weekend of the season at Indy. “I just wish we were a little closer."

The most surprising part of what's happened is that Dixon has been one of the steadiest drivers in the series for two decades.

And Dixon hasn't just completed every lap of every race this season, he's led in points every day of this strange, abbreviated season.

“It’s definitely been a trying last few race weekends between Mid-Ohio and Indy," Dixon said Saturday. “I’m still mad at myself for making that mistake at Mid-Ohio and letting those points get away. As always, the (IndyCar) points title comes down to the last race."

The truth is Dixon is still in the driver's seat.

By finishing eighth or higher, he still earns the title, moving within one of matching Foyt's career record. If Dixon does claim the title, he and Foyt both would have won their sixth crowns at age 40.

History suggests Dixon will be fine, too. He's had a top-seven finish in seven of the last eight races on St. Petersburg's street course.

So maybe the three-week break will help Dixon clear his mind before contemplating tactics. Or perhaps it will just help him get back to being himself.

“What I see, from working closely with him, is that his (driving) level is so high all the time that even on a bad day, he's up front," teammate Marcus Ericsson said.

All he really needs, though, is one more good day in the No. 9 car to reclaim the title of champion for the second time in three years.

“The fight will still be on until someone locks up the championship," Dixon said. "So you have to keep digging deep and moving forward the best you can.”