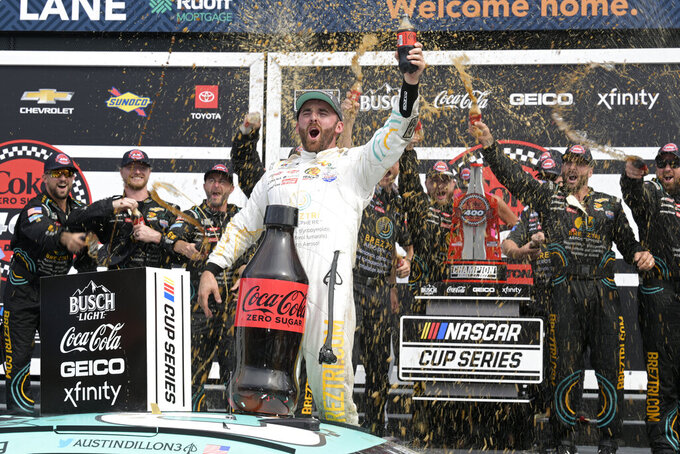 Austin Dillon stole the final playoff spot with his last-gasp victory at Daytona, which was scheduled for Saturday night then rained out until Sunday morning and halted for more than three hours shortly after Dillon had taken the lead. When the race resumed, he held on for his first victory of the year and the final spot in the playoffs.

It was a sloppy close to the regular season: Only five of the 37 cars avoided crashing in the most destructive summer race at Daytona in history. Justin Marks, team owner of Trackhouse Racing, tweeted before the long delay that crash damage had already "cost the teams collectively about" $4 million.

That's just one part of the wonky state of play right now in NASCAR.

Martin Truex Jr., who hovered around fourth in the standings most of the season, was knocked out of the playoff field when Dillon became the 16th different winner of 2022. Although he didn't win a race this year, Truex was consistent enough to hover near the top of the standings for 26 races and it wasn't good enough.

Now the 2017 champion, last year's runner-up and a driver who has made it to the title-deciding final round in four of the last five years is out. It's a double blow for Toyota, the thinnest brand in the field, which advanced only three drivers into the playoffs.

Oh, Kurt Busch qualified. But he had to withdraw his spot last week when concussion symptoms lingering from a July crash ruled him out of the start of the playoffs. That leaves 23XI Racing unrepresented in the playoff field in its second season.

Kyle Busch? It's highly unlikely he will rally and win a third title.

He is in the final year of his contract with Joe Gibbs Racing and as the season hits its final 10-race stretch, a split seems inevitable. Busch has been with Gibbs since 2008 and is the only active Cup Series champion with multiple titles. But his sponsor is leaving NASCAR and neither Gibbs or any other team has been able to put together a deal to put Busch in a competitive car next season.

“First I have an announcement to make. Everybody ready?” Busch said as he entered Daytona's media center Saturday. "Ok, there is no announcement. Good? We all good? We clear? Moving on.”

He's admittedly been distracted by his own plight and now his brother's health has been looming over the family since the July 23 crash at Pocono.

Which brings up the topic of the Next Gen cars, the cost-conscious effort t equal the playing field across the series.

It certainly created parity as NASCAR this season celebrated five first-time Cup winners and welcomed Trackhouse drivers Ross Chastain, Daniel Suarez, rookie Austin Cindric of Team Penske and Chase Briscoe of Stewart-Haas Racing to the playoffs. Tyler Reddick also scored the first two wins of his career this season, but the Richard Childress Racing driver has been to the playoffs before.

Still, questions about the safety of the car have followed NASCAR since rumors of issues in crash tests percolated last summer during development. Now Kurt Busch has been out six races and counting with no return in sight as the playoffs begin Sunday at Darlington Raceway.

His boss, Denny Hamlin, was caught in a big crash triggered by rain Sunday. Asked if he was OK after the contact: “The hit was just massive. It was my first one in this Next Gen and it was legit."

Drivers have reported to NASCAR that the Next Gen is too rigid and Joey Logano raised the issue again after Busch's crash at Pocono.

“For 99% of the crashes where you used to just get out and be OK, it hurts now,” he said. “I went through a few of them this year and we’ve wrecked more stuff this year than we ever have and we’re in a car that’s different than ever. It hurts. Every single driver gets out and says that it hurts more, I’m pretty sure.”

Adjusting to the new car has taken time: Kevin Harvick, the 2014 NASCAR champion, needed until August to snap a 65-race losing streak with back-to-back wins. And second-year team Trackhouse, meanwhile, had three wins from Chastain and Suarez before Harvick reached victory lane.

The 2020 champion, Chase Elliott, has a series-best four wins and won the regular season championship, but does that make NASCAR’s most popular driver the favorite to hoist a second Cup? Who knows? No other driver has more than two wins this season.

Ryan Blaney is the only winless playoff driver in the playoff field and he barely made it; Dillon's win put Blaney and Truex into a battle to the final lap as to which driver would take the final slot in the field on points.

“Definitely a roller coaster of emotions, and luckily it ended on a high for our group,” said Blaney, who was so consistent this year he hovered inside the top three in points almost the entire regular season — and nearly missed the playoffs.

There are 10 races to go to decide this title and this season has proved that nothing is predictable — certainly not who will win the championship.