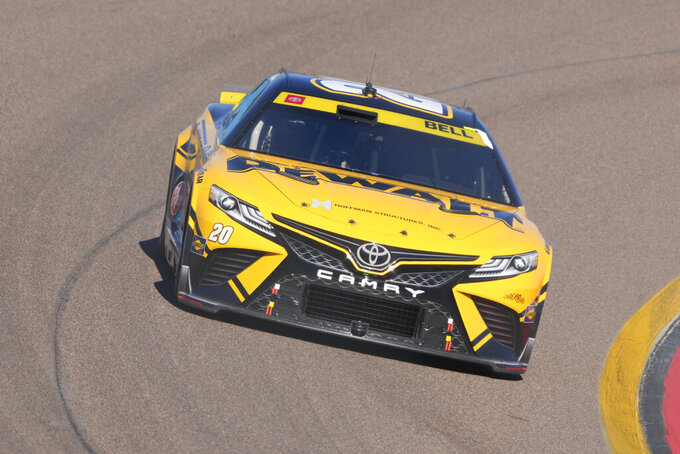 AVONDALE, Ariz. (AP) — As Christopher Bell was about to leave for driver introductions, he still wasn't sure if he would even race in the NASCAR Cup Series finale.

Bell and his Joe Gibbs Racing teammates learned a few hours earlier that team vice chairman Coy Gibbs, son of NFL and NASCAR Hall of Famer Joe Gibbs, had died in his sleep at age 49.

Unsure what to do, Bell and the other drivers were told by JGR president Dave Alpern that they should go ahead and race despite the crushing news.

“That was an experience like I’ve never gone through in my entire life,” Bell said on Sunday at Phoenix Raceway. “In that moment, you don’t know what’s right and what’s wrong and you don’t know if you should get in the race, car and race if you shouldn’t race.”

Bell did climb into the car, finishing 10th after a late pit road mishap cost him a shot at winning a championship. He finished third behind champion Joey Logano and Ross Chastain in his first Cup Series playoff.

All four struggled with emotions just to be able to get in their cars.

News of Coy's death was announced shortly before race, sending shock across the paddock.

Busch cried on pit road before his final race after 15 years with Joe Gibbs Racing. J.D.'s son Jackson had “Uncle Coy” on his helmet while working the race on Bell's crew.

“Of all the trials I've gone through this year, today was certainly the worst of it all, the hardest of it all,” Busch said.

Many of the Xfinity drivers left after Saturday's race and JGR had to find someone who could fit in a car set up for the small-statured Gibbs. The team was able to track down Daniel Hemric, but he was stuck in traffic outside the track and a police escort was needed to get him to the car in time.

“Today we will do what we don’t want to do, but we will unite as a family and race for the name on our chest," Hamlin tweeted.

Bell earned a spot in the Cup Series playoffs by twice winning when he had to. The 27-year-old won at Charlotte on Oct. 9 to get into the playoffs and won at Martinsville last week to reach the winner-take-all finale.

Bell started started 17th in the No. 20 Joe Gibbs Racing Toyota and worked his way to the front on the 1-mile oval. The former dirt racer from Oklahoma was able to pull up to the bumper of Joey Logano, the only final four driver ahead of him, late in the race, a possible championship in his sights.

Bell's bid fell apart when one of his crew members got his hand caught changing the left rear tire. The delay cost him 11 spots and a shot at the title, but the news earlier in day put the disappointment into context.

“An incredible twist of emotion and a perspective change for sure,” Bell said. “You think that this is the big picture and then whenever you get news like that, you realize that it’s a small picture in the grand scheme of things.”