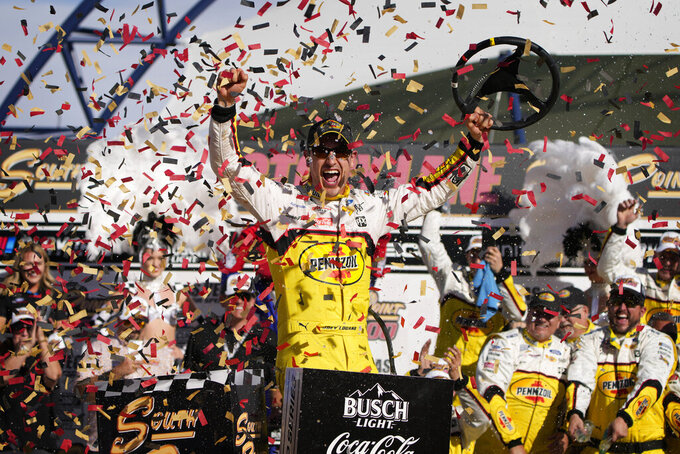 Last race: Joey Logano became the first driver to secure a spot in the championship finale, passing Ross Chastain with three laps left to win at Las Vegas for the third time.

Fast facts: Logano, the 2018 series champion, moved into the points lead by 21 over runner-up Chastain, 22 over previous leader Chase Elliott, and 33 over Denny Hamlin. ... Chastain led 68 of the 267 laps at Las Vegas. ... The victory was the 30th of Logano's career. ... Elliott's series-best five wins match the combined total of Logano (3) and Chastain (2). ... Christopher Bell, fourth in points after winning at Charlotte, dropped to eighth in the playoff standings, 56 points behind with two races remaining before the final four is set.

Last race: Josh Berry took the lead from AJ Allmendinger with 34 laps to go at Las Vegas and won for the second time in the series' last three visits there, securing his spot in the championship finale.

Fast facts: Berry's victory was the fifth of his career and led a 1-2-3 finish for JR Motorsports as Noah Gragson was second and Justin Allgaier third. ... Berry went into the race having failed to lead a lap in the previous six races. ... Gragson remained the points leader, by 19 over Ty Gibbs and 29 over Allgaier. ... Allmendinger finished 22nd, just his fourth finish outside the top 10 in 30 races, and dropped to sixth in points, 45 off the lead. ... Sam Mayer, the fourth JRM driver still in the playoffs, is last in the standings, 65 off the pace.

Last race: Matt DiBenedetto, not a playoff contender, earned his first career victory in the series with his win at Talladega, which finished under caution with him in front.

Fast facts: Chandler Smith heads into the last race to make the finale with a 12-point lead over Zane Smith and a 27-point cushion ahead of defending series champion Ben Rhodes. Christian Eckes and Stewart Friesen are both 30 points back and John Hunter Nemechek is 32 behind. ... Zane Smith's 12 top-five finishes are three more than any other driver and his 17 top-10 finishes also are three more than any other driver.

Last race: Verstappen claimed his second consecutive season championship, starting from the pole in rainy Japan and leading throughout to clinch the title with four races remaining.

Fast facts: Verstappen has won 12 of the 19 races contested this season and 13 of the last 20. His Red Bull teammate, Sergio Perez, also has won twice this season with Ferrari (Charles Leclerc 3, Carlos Sainz Jr. 1) winning the other four races. ... Leclerc leads all drivers with 10 pole positions. Verstappen has five. ... Seven-time series champion Lewis Hamilton is winless through 19 races and has finished on the podium just six times.