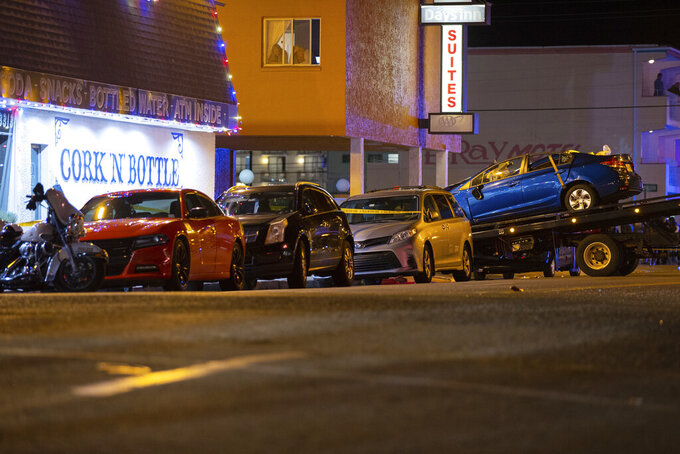 WILDWOOD, N.J. (AP) — Authorities announced charges Tuesday against two men in a pair of vehicle crashes — one of which killed two people — during a pop-up car rally in southern New Jersey over the weekend.

Cape May prosecutors and Wildwood police earlier said Gerald White, 37, of Pittsburgh was charged with two counts of death by auto, assault by auto and other counts. They allege his car hit another car Saturday, killing a passenger in the other vehicle, 34-year-old Timothy Ogden, then struck two pedestrians, killing Lindsay Weakland, 18, of Carlisle, Pennsylvania.

On Tuesday, authorities announced aggravated assault and assault by auto charges against 31-year-old Eryk Wnek of Linden. They allege that he did a burnout with his car Saturday, collided with another vehicle and then struck a low-speed vehicle, critically injuring the driver and also injuring a woman and four juvenile passengers.

Both defendants were assigned public defenders but were retaining private counsel; a message seeking comment was left for Wnek's attorney Tuesday and officials said no paperwork had been received for an attorney for White. A listed number for White could not be found Tuesday.

Prosecutor Jeffrey Sutherland linked both crashes to an unsanctioned car rally separate from the Fall Classic Car Show in Wildwood.

“Make no mistake that the tragic and dangerous events over the last several days in Wildwood, Rio Grande, Seaville and surrounding communities are a direct result of the organizers of a pop-up car rally self-identified as H2Oi or H2O22,” Sutherland said after White’s arrest.

Participants say the event gives enthusiasts a chance to gather and check out cars, but officials in other areas such as Ocean City, Maryland, have reported problems stemming from the event in previous years.

“Directing hundreds if not thousands of people driving high performance vehicles to an area without any planning, staging or permitting created the chaos that led to these deaths and injuries,” Sutherland said, vowing “swift and appropriate law enforcement and legal response” against anyone organizing such an event.