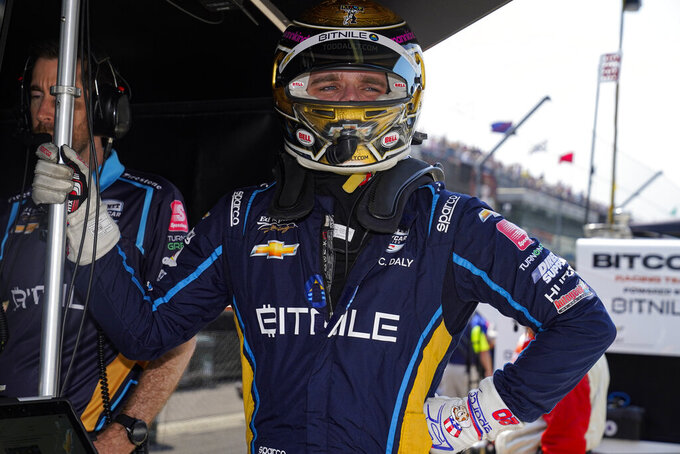 Conor Daly waits for his crew to ready his car during practice for the IndyCar auto race at Indianapolis Motor Speedway in Indianapolis, Friday, May 20, 2022. (AP Photo/Michael Conroy)

INDIANAPOLIS (AP) — Alexander Rossi knows everything and is divulging nothing.

Rossi was tight-lipped during Indianapolis 500 media day Thursday while discussing a rash of pranks that have turned May into silly season inside the paddock leading into “The Greatest Spectacle in Racing.”

“There’s been a lot of rain,” Rossi said. “Not a whole lot to do, unfortunately.”

Drivers have stayed busy by one-upping each other with antics and practical jokes.

Someone filled Conor Daly’s portable hot tub with Orbeez, superabsorbent polymers that resemble jellybeans and grow to 100 times their original size when submerged in water. He had to call a sanitation truck to get rid of them.

“I’ve got no answers as to who has delivered all the debris to my hot tub,” Daly said. “I hope to find out someday, and when I do find out, they better run and hide.”

Tony Kanaan seemed to, at least, take partial credit for the shenanigans.

It was just the start of the hijinks.

Someone flipped Colton Herta’s golf cart, allowing the oil to drain out. Someone took Romain Grosjean’s patio furniture and placed it inside Daly’s hot tub. Someone zip-tied Herta’s motorhome door shut. Someone took Rossi’s golf cart and placed it atop four trash cans. Daly at least fessed up that he placed “a bunch fake crickets” inside Josef Newgarden’s motorhome after he found the door unlocked.

But the coup de grâce goes to whoever moved Grosjean’s scooter atop the iconic pagoda inside Indianapolis Motor Speedway.

Added Daly: “That was Alex and Colton, and apparently Will Power was involved in that, too. That was quite funny and I did enjoy that.”

It took Grosjean six hours to find his scooter and even longer to get it down.

“I like the fact that we have fun and enjoy it,” he said. “A good prank is the one that makes you laugh and doesn’t leave any marks.”

Seven-time NASCAR champion and Indy 500 rookie Jimmie Johnson hasn’t ruled out returning to the Cup Series, and he might even have an idea of his next race.

Johnson said Thursday he’s “open to” driving the “Memorial Day Double”— driving in the Indy 500 and then the Coca-Cola 600 in Concord, North Carolina on the same day. Kurt Busch, Tony Stewart, Robby Gordon and John Andretti have accomplished the feat.

“I always thought that the guys doing the double just did something special and unique, and I wanted to do that,” Johnson said.

And he still does.

“I’m open to it” said Johnson, who has yet to drive NASCAR’s NextGen car. “I don’t know if it would ever come together, but I’m certainly open to it.”

NO SELLOUT IN SIGHT

The Indianapolis 500 may fall just shy of a sellout Sunday but the race is still expected to reach its second-highest attendance mark over the last 20 years.

IMS President Doug Boles said about all front-stretch tickets are sold out and less than 10,000 tickets remain on sale for grandstand seating. Boles said IMS expected to sell about another 5,000 tickets for Sunday’s race. The grandstand capacity is roughly 233,000 seats.

All parking is sold out and Boles urged fans without one to use shuttles or find alternative lots.

Boles said only the 100th running of the Indianapolis 500 in 2016 had a bigger crowd than the expected one this Sunday. Throw in fans watching from suites, the infield and the Snake Pit, and the track can host more than 300,000 fans at “The Greatest Spectacle in Racing.”

Boles said security is again tight at IMS in the wake of the deadly rampage earlier this month at a Buffalo grocery store and Tuesday’s school shooting in Uvalde, Texas. Boles said his team works closely with the FBI, the Secret Service and more than 1,100 police officers will be on site.

“The level of concern is high and always has been,” Boles said.

Helio Castroneves does a pretty good job keeping the “Drive for Five” in perspective.

Should he need some assistance, though, he’ll find a helping hand nearby.

“Even if I did think like that, my wife would probably come and slap me in the face and say ’You can’t think like that,” the only Brazilian in the four-time winner’s club.

Castroneves, the defending 500 champ, has been one of the most successful drivers in Indy history. In addition to his record-tying victory total, he’s also owns three second-place finishes, one third and his four starts from the pole are tied for third all-time.

On Sunday, the 47-year-old Castroneves will start 27th — the second-worst qualifying position of his 22 Indy starts.

“I’ll be honest, if you think to the end result, then you’re going to miss the details to get there,” he said. “We’ve got to work together and that’s what I keep telling those guys.”