Perez on pole for Saudi Arabian GP day after nearby attack 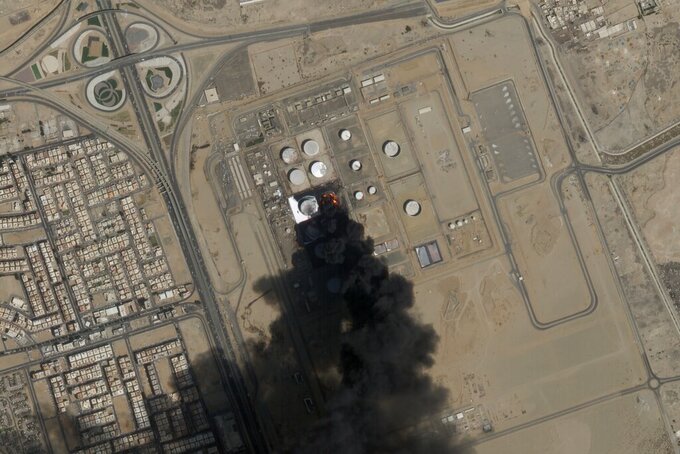 This satellite photo from Planet Labs PBC shows a fire still burning at Saudi Aramco's North Jiddah Bulk Plant after an attack by Yemen's Houthi rebels ahead of a Formula One race in Jiddah, Saudi Arabia, Saturday, March 26, 2022. Authorities pledged Saturday that the F1 race would go on Sunday. (Planet Labs PBC via AP)

JIDDAH, Saudi Arabia (AP) — Sergio Perez won the first pole of his career Saturday at the Saudi Arabian Grand Prix, where Formula One has been under heavy scrutiny for continuing its race weekend following an attack on a nearby oil depot.

Perez of Red Bull surged to the top of the chart for the first time in 215 career F1 races with a late push to edge Ferrari teammates Charles Leclerc and Carlos Sainz Jr. The Mexican's lap pushed Red Bull teammate Max Verstappen — the world champion — to fourth on the starting grid.

But most of Saturday was focused on F1's decision to continue at a circuit about 11 kilometers (seven miles) from the bombed, smoke-covered depot. The attack Friday happened during F1's first practice session of the weekend and smoke could be seen billowing in the background of the circuit.

Drivers met multiple times Friday for about four hours before deciding early Saturday morning to compete. Sainz said racing was the right decision but that F1′s controversial participation in Saudi Arabia can’t be ignored once the series globe-trots away to Australia and then Europe.

“There will need to be discussions after this race,” the Spanish driver said. “Because what has happened in the last 24 hours is definitely a point of discussion.”

Lewis Hamilton, usually outspoken on human rights and other issues, said little about the collective decision to race. The seven-time champion only said he was eager to get home.

“Together as a group we all discussed and made a decision as a sport,” Hamilton said. “I don’t feel a particular way about it, I’m looking forward to getting out.”

Hamilton, winner of a record 103 pole positions, had his worst qualifying session since 2017. He didn't advance out of the first round and qualified 16th; Hamilton moved up to 15th after Mick Schumacher crashed and was ruled out of Sunday's race.

Schumacher, the son of seven-time champion Michael Schumacher, mangled his car with a hard hit into the concrete barrier. He was flown by helicopter to a hospital for an evaluation before returning to his hotel.

Haas said it would field only one car Sunday. The American team said its young driver, who turned 23 this week, was able to speak to his mother before he was transported to the hospital.

The Schumacher crash caused a lengthy red flag for cleanup on what has been a messy weekend for F1.

Team principals were adamant Saturday it is safe to race in Saudi Arabia despite the attack by Yemen's Houthi rebels. F1 CEO Stefano Domenicali addressed the decision to compete.

“We are not blind,” he said in comments distributed by a pool report. "You cannot pretend to change a culture that is more than (a) millennium in the blink of an eye. Of course there are tensions inside and things that have to be improved.

“We don’t want to be political on that but I do believe we are playing a prominent role in the modernization of this country.”

Domenicali also addressed the difference between remaining in Saudi Arabia against F1's decision to drop its race from Russia from this year's schedule after Russia invaded Ukraine.

Ferrari principal Mattia Binotto said the decision to continue was correct, but team principals also said no driver or team member would have been stopped from leaving.

Hamilton and other drivers previously expressed their concerns about racing in the region, mainly concerning Saudi Arabia’s human rights record.

The plant stores diesel, gasoline and jet fuel for use in the kingdom’s second-largest city. It accounts for over a quarter of all of Saudi Arabia’s supplies.

A Saudi-led coalition fighting Iran-backed Houthi rebels in Yemen unleashed a barrage of airstrikes on Yemen's capital and a strategic Red Sea city, officials said on Saturday. The overnight airstrikes on Sanaa and Hodeida — both held by the Houthis — responded to the attack in Jiddah.

The circuit is hosting an F1 race for the second time, after the inaugural race last December, and pole-winner Perez called it “definitely the most dangerous place in the calendar. That’s no secret about it.”