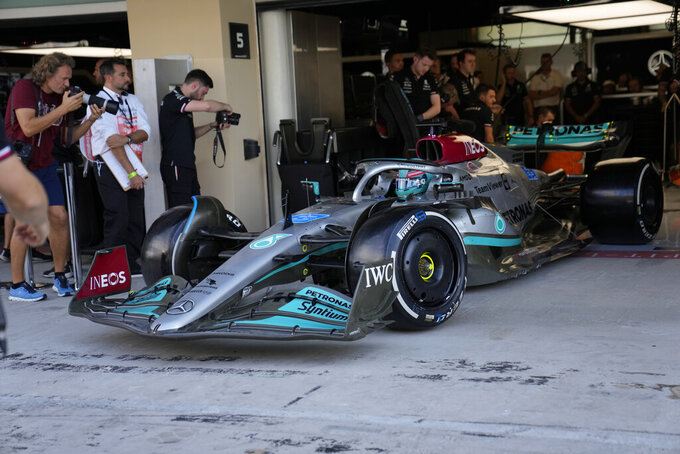 ABU DHABI, United Arab Emirates (AP) — Two drivers are level on points ahead of the Formula One season finale in Abu Dhabi. This time it's only for second place.

Charles Leclerc and Sergio Perez are both on 290 points going into the final race Sunday at the Yas Marina circuit. It's a subdued echo of last year's title-deciding spectacular between Max Verstappen and Lewis Hamilton, who also arrived in Abu Dhabi on level terms before Verstappen took the title following a heavily disputed restart procedure.

Just like last year, there's also an element of controversy. Verstappen refused to give up sixth place to his teammate Perez at the last race in Brazil despite a team order, a decision that could cost Perez in a close fight with Leclerc on Sunday.

Verstappen, who secured the title more than a month ago, has refused to say why he wouldn't help Perez, only that it was “about something that happened earlier in the season." He said Thursday the issue was resolved and he would offer support if the Red Bull team asks him to.

Verstappen, who is also able to take a 15th win of 2022 to extend his single-season record, condemned “unacceptable” social media abuse aimed at him and his family after the incident with Perez in Brazil.

Hamilton said Thursday he rarely thinks any more about last year's controversial race in Abu Dhabi. This week, the British driver could lose one record from his illustrious career. Hamilton has won at least one race each year since his 2007 debut, but is without a victory in 2022 after Mercedes spent much of the season struggling with the car's tendency to bounce at high speed. His best chance seems to have gone after finishing behind teammate George Russell in Brazil last week.

“We don’t believe that this track will necessarily be our strongest. We think it may suit the others a little bit better, but I won’t know till I get out there, to be honest. I hope that it’s like last race,” he said Thursday.

Red Bull is the runaway constructors' champion but Mercedes could in theory overtake Ferrari for second. For many other teams and drivers, it's a low-stakes race. No one is driving to save their seat for 2023 because all of next season's team pairings are confirmed with the exception of one Williams seat. That will go to U.S. driver Logan Sargeant if he meets a minimum championship finish in Formula Two.

Verstappen set the fastest time of the day in the second practice session with 1 minute, 25.146 seconds, beating Russell into second place by 0.341 seconds. Leclerc was third-fastest, 0.453 off the pace, ahead of Hamilton and Perez.

Hamilton led the first practice session amid a host of unfamiliar names on track as eight of the 10 teams opted to put a reserve or development driver in one of their cars. Verstappen, Ferrari's Carlos Sainz and Alpine's Fernando Alonso all sat the session out. Sargeant placed 15th after spinning halfway through the session.

Four-time champion Sebastian Vettel is looking to the future ahead of his last race in F1 before retiring at the end of the season.

“There’s lots of other things in my head as well, other interests and ideas outside racing,” Vettel said Thursday. “Obviously I’ve done this for so long and it’s central to my life. So it would be difficult to to say that I’m not going to to miss it."

Vettel leaves after 16 seasons in which he was the youngest-ever race winner in 2008 — a record now held by Max Verstappen — then enjoyed overwhelming dominance with Red Bull, failed title challenges with Ferrari, and two often-anonymous midfield seasons with Aston Martin. Those quieter recent seasons “have been very important for me, one, for the driving, but maybe to have the room and possibility to grow even more off track," he said.

The entire grid of 20 drivers assembled for a farewell dinner in Vettel's honor Thursday in a measure of his popularity on the grid.

“We’ve come a long way as drivers and continue to grow as men. Despite whatever may happen on the track we grow and become better each day," Hamilton posted on Instagram. "Us all coming together to celebrate life and Seb’s amazing career in F1 is truly a night I’ll never forget.”

One of F1's most vocal campaigners for human rights, Vettel has also focused attention on the sport′s environmental record. When he announced in July that he would leave, Vettel said that, as much as he enjoyed racing, he felt increasingly uncomfortable with “burning resources.”

As Vettel leaves, F1 faces an uncertain future in Germany. The country is a big TV market for F1 and used to be a strong source of talent, with Michael Schumacher, Vettel and Nico Rosberg combining for 12 championships in 22 years from 1994 to 2016. At least one of those three has raced each season since 1991.

With Vettel gone, Nico Hülkenberg will be the only German on the grid for next year after Haas confirmed Thursday it would replace Mick Schumacher for 2023.

Daniel Ricciardo is heading back to Red Bull next season as a reserve driver after being left without a race seat for 2023, Red Bull adviser Helmut Marko told German broadcaster Sky Sport on Friday.

The Australian won seven races for Red Bull between 2014 and 2018. He added an eighth career win for McLaren last year but this season he's often struggled to keep up with teammate Lando Norris.