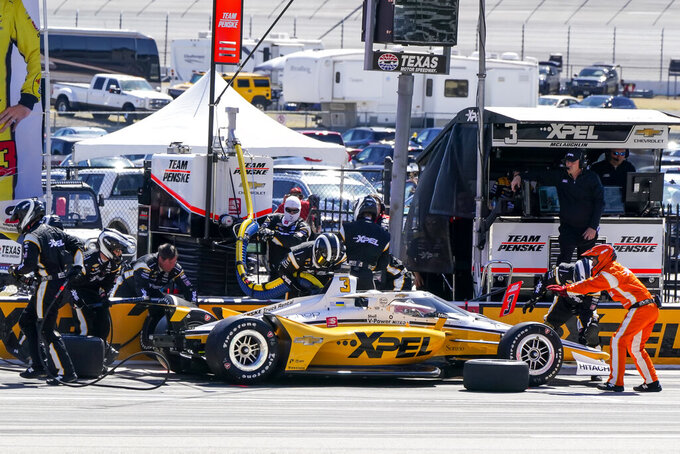 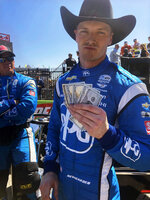 FORT WORTH, Texas (AP) — Roger Penske met Josef Newgarden in victory lane with six crisp hundred dollar bills to gift the race winner. He's got another $300,000 in bonuses for the 300 employees back at Team Penske.

The Captain sure knows how to celebrate a monumental victory.

Newgarden used the nonexistent high line to pass Scott McLaughlin in the final turn Sunday at Texas Motor Speedway and steal the IndyCar race his teammate had dominated. It was the 600th overall victory for Roger Penske across all of his platforms.

“Roger is true to his word. He gave me cold hard cash in victory lane!” Newgarden said. “What a guy! He didn't even make me wait.”

The remaining cash will be doled out in $1,000 increments to each of the Team Penske employees as a reward from the 85-year-old team owner. Penske opened the year with Austin Cindric's victory in the Daytona 500 and now has back-to-back wins from McLaughlin and Newgarden to open the IndyCar season.

Better yet, the duel decided Sunday in the top line at Texas closed out a surprisingly competitive race that just might have saved IndyCar's future with its longtime track partner. Newgarden won IndyCar's 35th race at Texas, which has hosted the series since the track opened in 1997.

The existing contract expired with this race and if Sunday had been another snoozer, it could have been the curtain call for IndyCar in Texas. A traction compound used in the turns of the 1.5-mile track is meant to enhance NASCAR's visit, but the PJ1 is a horrible mismatch with IndyCar.

Drivers bold enough to test the high line often find an icy surface that sends them straight into the outside wall.

“I thought the race was pretty good and I thought the track opened up,” Penske told The Associated Press. “Even talking to the promoter, he said it was a good race. I was really thrilled with the whole show, and obviously winning is important, but a good race is the most important thing for the series and for Texas and for the fans.”

So will a contract extension be next?

“The promoter was excited about the race and he said he was going to call me,” Penske told AP. “That's a good sign.”

McLaughlin started second but snatched the lead from pole-sitter Felix Rosenqvist on the opening lap. The New Zealander led 186 of the 248 laps and wasn't challenged until Newgarden's last-ditch charge.

The margin of victory was 0.669 seconds — the eighth-closest finish in 35 races at Texas.

IndyCar held a special session Saturday for seven drivers to take 30 minutes around the top of the track trying to create more grip and force another lane to develop. It worked with mixed results: Some drivers did crash when they got up into the slippery gray line, others were more patient and made it work.

“My plan was to go the high line in turn one, I thought it was going to work for the start of the race, when it’s a bit slower and I think I got around three or four cars there on lap one just going around them in turn one,” said third-place finisher Marcus Ericsson. "After that I was sort of settling in, not wanting to play too much with it.

“I saw some other people going up there, sort of holding it in the high line. I sort of was brave enough to try myself, as well. It worked. Then you get confidence. I did quite a few passes around there, the outside in 1-2.”

It was the first career podium on an oval for Ericsson, of Chip Ganassi Racing. He was followed by Will Power of Team Penske in fourth, and then the rest of the Ganassi drivers: Scott Dixon was fifth, Jimmie Johnson sixth and reigning IndyCar champion Alex Palou seventh.

It was the highest IndyCar finish for Johnson, a seven-time NASCAR champion and the all-time winningest driver at Texas with seven wins. Victory lane is named after him, but Johnson last year opted not to run the ovals as an IndyCar rookie.

“Man, that’s really good. First IndyCar oval race, sixth at Texas? These cars are hard to drive,” Newgarden said. “I need to watch this race back, see how he got there.”

Johnson added ovals to his schedule this year and debuted at a track he knows better than anyone. Following his strong performance, his engineer yelled over the radio, “Let's go win the Indianapolis 500!”

When Johnson passed teammate and six-time series champion Dixon, a six-time Texas winner, he had to look twice to make sure he wasn't mistaken.

“I passed Scott Dixon, probably to his disappointment, to my excitement,” Johnson said. “When I caught that group and caught the 9 car, I had to look two or three times to make sure really it was the 9 car and I thought ‘Yeah, I have caught Scott Dixon, this is good.’”

An awful start to the season for free agent Alexander Rossi continued seconds into the race.

Rossi was first flagged for jumping the start, and as he was giving his position back as penalty, his Andretti Autosport Honda experienced an electrical issue. He slowed to a near crawl and was back on pit road, his race over, just 11 laps into the event.

“It was something electrical, we were losing battery voltage, really from the start of the race, and it got exponentially worse until the battery just died and here we are,” Rossi said.

Rossi was a disappointing 20th in last month's season-opening race at St. Petersburg. This start to the season is not helping the 2016 Indianapolis 500 winner in his search for a new contract.

“Well, at least we saw the green flag, so that’s cool,” Rossi deadpanned. “At this point, what do you say?”

The day only got worse for the Andretti camp: Romain Grosjean was hit by electric problems that ended his race early; and Devlin DeFrancesco was involved in three caution flags — the final one a race-ending, three-car crash with Graham Rahal and Helio Castroneves.

UP NEXT: IndyCar is off until April 10 when it races on the streets of downtown Long Beach, California. The race was the season finale a year ago because of pandemic restrictions and was won by Colton Herta.