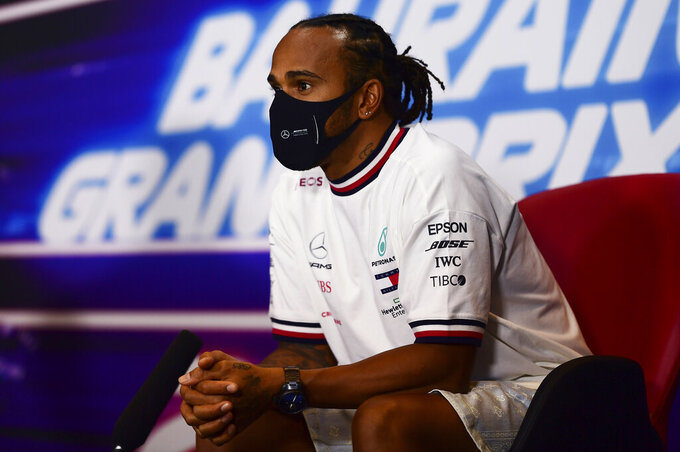 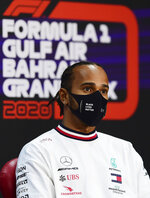 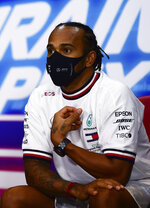 Lewis Hamilton has been praised by a human rights group for urging Formula One to help improve people's rights in places where they go racing.

The seven-time world champion received personally addressed letters from three alleged torture victims in Bahrain, and Hamilton's reaction was welcomed by Sayed Ahmed Alwadaei, the director of the London-based Bahrain Institute for Rights and Democracy.

“It is very encouraging to hear Lewis taking human rights so seriously and recognising the need for Formula 1 to do more as a sport to push for change," Alwadaei told The Associated Press by email.

"I’m glad that he has received our letters and look forward to providing his response to the torture survivors who have bravely risked reprisals by reaching out to him. Hundreds of Bahrainis remain imprisoned for voicing criticism of the government.”

Hamilton received the letters at the Bahrain Grand Prix on Thursday, along with an NGO letter sent to F1 chairman Chase Carey listing alleged abuses in the Persian Gulf island since 2011.

“The human rights issue in so many of the places we go to is a massive problem," Hamilton said, pledging to read the the letters in detail. “I do think as a sport we need to do more ... not just saying that we’re going to do something (but) that we actually see some action taken."

A total of 16 rights groups co-signed the letter to Carey, urging F1 to leverage compensation for victims and ensure people can protest races being held in Bahrain without reprisals.

Bahrain is accused of exploiting F1 to “sportswash” its human rights abuses. Another letter sent to Carey, co-signed by 30 British cross-party parliamentarians, asked F1 to implement its human rights policy at the Bahrain GP amid concerns about rights violations linked to the race.

Bahrain's National Communication Centre responded on Friday to an email request from The AP to explain the government's position on accusations of torture.

“The government of Bahrain takes the protection of its citizens’ human rights and freedom of expression extremely seriously, and this is explicitly protected by Bahrain’s constitution," the centre said. “The Kingdom has a zero-tolerance policy towards mistreatment of any kind. The government has put in place a range of internationally-recognised safeguards to ensure human rights abuses do not occur.”

The three survivors' letters, initially reported by The Guardian newspaper and obtained by The AP, contain harrowing descriptions of extreme beatings, torture and sexual abuse.

The first was from Ali AlHajee, held for seven years in Jau Prison for organizing pro-democracy protests. His cell is 11 kilometers (seven miles) from the F1 track in Sakhir.

“When I was taken into custody, security officers brutally tortured me, seeking confessions to crimes I did not commit. I was beaten so badly that I required two surgeries to repair the damage to my nose and was left partially deaf,” he wrote. “The Bahraini government goes to extreme lengths to keep patrons of the Grand Prix insulated from the realities of their repressive regime. They want the world to see the Bahrain of fast cars and expensive parties.’"

After writing a Facebook post demanding justice for those imprisoned for protesting the race, she was sentenced to three years in jail. She described to Hamilton her treatment by officers from Bahrain’s National Security Agency.

“They beat me and tore my hijab off and tried to strangle me with it. When I still refused to comply, one officer sexually assaulted me. My dignity was destroyed and I considered suicide. Only the thought of my children stopped me,” she wrote. “My son Kameel is now just 17 years old, but he is facing 21 years in prison. Since January, the government has piled over 20 trumped-up cases against him.”

Yusuf asked if Hamilton would consider meeting her and other activists.

“Hear our stories for yourself,” she suggested. “Together, perhaps we can encourage positive change in Bahrain.”

The third letter was written by Mohammed Ramadhan, a former member of Bahrain’s security forces now on death row.

“When the regime discovered that I had supported Bahrain’s pro-democracy uprising, it took revenge against me and framed me in a murder case ... I was beaten with iron bars, kicked repeatedly in the testicles and forced to stand until I collapsed,” Ramadhan wrote. “I was handcuffed and stripped naked while they sexually assaulted me."

He said the abuse lasted for four days.

“I never gave them the confession,” Ramadhan said. "They turned to my colleague, Husain Moosa, subjecting him to unspeakable abuses until he implicated me in the alleged crime.”

The survivors' letters presented to Hamilton were co-signed by Alwadaei; by a British House of Lords member; by the director of an international lawyers and investigators group fighting for victims; and another Bahrain rights group.

It concluded with a personal request to Hamilton to use his voice in the way he has done all season long to fight against racism.

“You rightly stated that Formula 1 must face up to the human rights issues in the countries in which they race ... You have a golden opportunity to use your voice to make a real difference,” the letter read. “Ali Al Hajee has told us that his dream would be to see you wear a t-shirt showing your support for political prisoners in Bahrain ... This would send a powerful message to Bahrain’s government that the world will not tolerate their flagrant abuse of human rights.”