Ferrucci hired to drive Foyt's flagship No. 14 in IndyCar 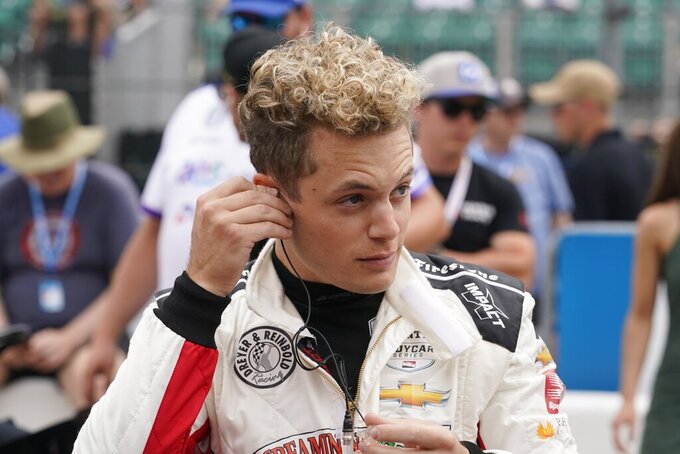 FILE - Santino Ferrucci prepares to drive during qualifications for the Indianapolis 500 auto race at Indianapolis Motor Speedway, Saturday, May 21, 2022, in Indianapolis. Ferrucci will return to full-time IndyCar competition next season in A.J. Foyt’s flagship car. Ferrucci was named Thursday, Oct. 6, as driver of the No. 14 Chevrolet for AJ Foyt Racing after two years filling in as a substitute driver. (AP Photo/Darron Cummings, File)

Santino Ferrucci will return to full-time IndyCar racing next season in A.J. Foyt's flagship car after two seasons filling in as a substitute driver for other teams.

AJ Foyt Racing said Thursday that Ferrucci will drive the No. 14 Chevrolet, which is fielded out of Foyt's headquarters in Waller, Texas. Ferrucci recently relocated to Texas.

The team last week hired Indy Lights driver Benjamin Pedersen for its second car, which is fielded out of Indianapolis. Team president Larry Foyt did not assign Pederson a car number, as it remains unclear if Dalton Kellett will return next year.

Ferrucci entered eight IndyCar races over the last two seasons, including once as the emergency replacement for Jack Harvey at Texas Motor Speedway when Harvey suffered a concussion in a crash during practice. He was also the Team Penske standby driver in July at Indianapolis in case Josef Newgarden was not cleared to compete.

“Being a part-time driver over the last two years has been hard for me personally," the 24-year-old Ferrucci said. "I’m a race car driver and I want to compete. Working with different teams has been exciting, and I’m proud that no matter which car I’ve raced, I’ve always shown speed and consistency.

"I couldn’t be more excited to join AJ Foyt Racing in the 14 Chevy. I can’t wait to make the best of it.”

Ferrucci last season drove for Rahal Letterman Lanigan, Dreyer & Reinbold Racing and Juncos Hollinger Racing, with a best finish of ninth place at Texas. The year before, he was sixth in the Indianapolis 500 while driving for Rahal.

Ferrucci finished a career-best fourth at the Indy 500 in 2020 when he drove for Dale Coyne Racing with Vasser-Sullivan.

Larry Foyt said he consulted with his father, the four-time Indy 500 winner, about adding Ferrucci and A.J. Foyt said he liked Ferrucci's attitude.

“He’s shown a knack for getting towards the front of the field, and I think he is a racer who moves forward on race day," Larry Foyt said. "A.J. sees the fire in him and has enjoyed their meetings together. I think Santino’s experience will help his rookie teammate as well, so he is a great addition to our roster.”

Ferrucci is a Connecticut native who initially pursued a career in European racing. He moved abroad when he was 14 and competed in several junior categories and holds the record for the youngest British Formula 3 Series winner at age 16. Ferrucci also raced in Formula 2 and was a Haas F1 development driver from 2017-2018.

“IndyCar became my goal after leaving F1 in 2018,” Ferrucci said. “I instantly fell in love with the cars, the style of racing and the people. That’s when I knew that IndyCar needed to be my new home.”

Ferrucci won rookie of the year in 2019 in his first full season driving for Coyne. He has never finished outside the top 10 in four Indy 500 starts.

As he was looking for a full-time job the last two years, Ferrucci made nine starts in NASCAR's Xfinity Series for Sam Hunt Racing. He was a career-best 13th at Las Vegas Motor Speedway in his second career NASCAR race.

“I’ve driven everything from dirt cars to stock cars to go-karts to Indy cars to F1 cars, and driving Indy cars demands a very unique driving style,” Ferrucci said. "It’s definitely the type of car where uncomfortable is fast — and it’s very hard to be comfortable with being uncomfortable.”