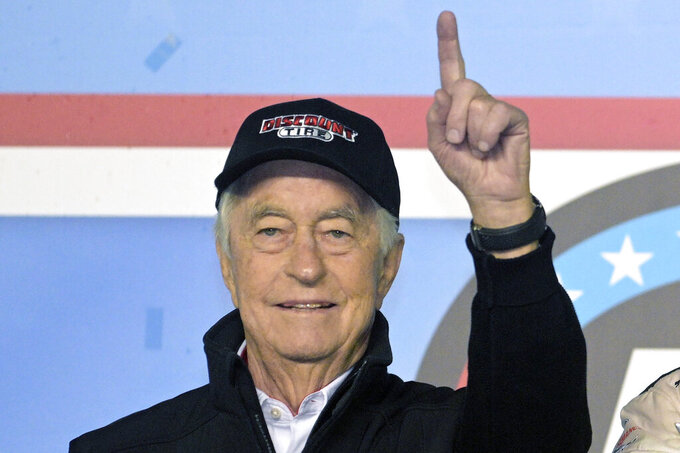 ST. PETERSBURG, Fla. (AP) — Roger Penske told everyone Scott McLaughlin was something special and never waffled, not even after a stinker rookie IndyCar season. He said just last week the three-time Australian Supercars Series champion would have a big sophomore year, and that was before McLaughlin earned a win.

So Penske was the first to hug McLaughlin when he climbed from his winning car Sunday in the IndyCar season opener. The race before that, The Captain went to victory lane to congratulate Myles Rowe, the young Black driver who last year was the Team Penske choice for the team it backs as part of Penske's “Race for Equality & Change” diversity program.

And before that, Penske was on pit road under the hot Florida sun in his uniform — black Team Penske vest over a starched white shirt, sleeves rolled up — watching Ernie Francis' debut in Indy Lights. Few had ever heard of the seven-time Trans Am champion before he won a race in Tony Stewart's all-star series last summer.

The race just happened to be in Indianapolis and Penske was in attendance. It wasn't long before he had tracked down Francis' phone number and cold-called the 24-year-old. Penske wants a Black driver in the Indianapolis 500 and Francis, a Florida native of Haitian descent, has been fast-tracked to be the first since 2002 perhaps by next year.

Francis was taking a nap before a Trans Am race in Brainerd, Minnesota, when he was awakened by a call from an unknown Michigan number.

“A voice comes over and says ‘Hi, this is Roger Penske’ and I thought I was dreaming. I was like ‘Man, no way,’ and I stood up real quick," Francis told The Associated Press. “And then he said it again and I was like ‘This is real!’ I was freaking out.”

Francis was on a plane two weeks later for a meeting with Penske in his motorhome in Indianapolis. Penske had never told Francis what he wanted Francis to do, and he just assumed he was being called about Austin Cindric's upcoming open seat in NASCAR's second-tier Xfinity Series.

So to see Francis make his debut, and Myles win the USF2000 opener and McLaughlin finally get his first victory, well, that's a pretty good day for Penske. But remember, Cindric seven days earlier won the Daytona 500 on Penske's 85th birthday and that's one hell of a week.

Penske has been relentlessly polishing his legacy every day since announcing in 2019 he was purchasing both Indianapolis Motor Speedway and the IndyCar Series. It didn't need to be polished, by the way, because Penske is the chairman of Penske Corp., an international company and industry leader in automobile dealerships and truck leasing.

In his spare time he goes racing, and his hobby has afforded him a record 18 victories in the Indianapolis 500, three Daytona 500 wins and 39 championships across all his racing ventures. In 2019, he was awarded the Presidential Medal of Freedom.

And yet that's not enough for Penske.

He has spent millions renovating the national landmark speedway and this May will at last get to host a full crowd at the Indy 500. He ran the race without spectators for the first time in its history in 2020, and COVID-19 restrictions limited him to about 150,000 on property last year.

But he certainly made sure the Indy 500 went on, largely at his own expense, and few doubt the IndyCar Series never would have survived 2020 and the first year of the pandemic without both Penske's backing and stewardship.

Despite the financial challenges created by the pandemic, Penske has managed to pull IndyCar through in a healthy position. IndyCar is in the first year of a new three-year television contract with NBC Sports, has a record 14 races airing on broadcast TV this season, and Penske is chasing a third manufacturer. A new engine is expected next season, and 26 full-time entries, the most in a decade, started Sunday's race.

Penske last year helped a team comprised entirely of women make the Indy 500, and Tatiana Calderon of Colombia has a ride this year with AJ Foyt Racing. He's working to hard to improve diversity and create opportunities for minorities throughout all areas of IndyCar and hopefully the Indy 500.

It's possible Penske has slowed down some but there's no way of really telling, other than his son, Greg, has been highly visible in both IndyCar and NASCAR over the last year. It was Greg Penske in St. Pete and not his father in attendance at a series news conference, but it was Penske who was first to McLaughlin's victory lane — the 599th win for a Penske driver.

Penske plans to be at the 24 Hours of Le Mans in June as a team owner for the first time since 1971, and he traveled to Sebring, Florida, to watch new Porsche factory driver Felipe Nasr test a sports car. He has watched Francis test and taken his parents out to eat. And when McLaughlin was down, it was Penske who assured him he was headed to a breakthrough and didn't need to panic about last year's disappointing results.

“Speaking pretty candid ... as a professional sportsman you go through highs and lows. You’re getting paid good money and you’re running 15th, it’s not good. I drive for the biggest motorsport team in the world. For me it wasn’t good,” McLaughlin revealed. “Roger’s pulled my head in, and we just got on with it.”