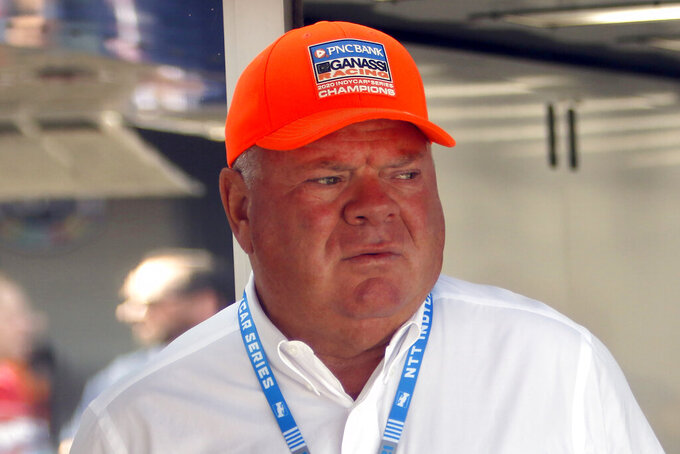 FILE - Car owner Chip Ganassi is seen in the paddock before an IndyCar race at Mid-Ohio Sports Car Course in Lexington, Ohio, Sunday, July 4, 2021. The conversation might not have even lasted 10 seconds. It was more of an exchange, really, but whatever Chip Ganassi said to Alex Palou after Sunday's, Aug. 7, 2022, race in Nashville was their first direct conversation since the reigning IndyCar champion said he was leaving the team. There's three races left in the season, Palou is in the thick of the title hunt and Ganassi is suing him. (AP Photo/Tom E. Puskar, File)

NASHVILLE, Tenn. (AP) — The conversation, if one could even call it that, might not have lasted even 10 seconds. It was more of an exchange between Chip Ganassi, who took a moment to congratulate Alex Palou, the driver he is suing because the IndyCar champion is trying to leave his team at the end of the season.

The tension between Chip Ganassi Racing and the 25-year-old Spaniard began last month when Ganassi said he'd picked up the option for 2023 on his young driver. Palou disputed Ganassi's claim and said he was leaving; minutes later McLaren Racing announced it had signed Palou.

The two had not spoken in the 26 days between the blowup and Sunday, when Palou finished third at the Music City Grand Prix to join race winner and teammate Scott Dixon on the podium.

Ganassi stopped at Palou's car, gave the driver a half-hug, said something brief and then continued on his way to celebrate with Dixon.

“I mean, it’s good, right?” Palou said. “I mean, we just finished on the podium. It was a good day. It was a good day for the team overall as well with Scott finishing P1. It was nice. I have no issues at all.”

But it's certainly been awkward within the Ganassi organization over the five races crammed into 21 days since Palou said he was not returning next year for a third season.

His access to team data has been restricted, and while Indianapolis 500 winner Marcus Ericsson and Jimmie Johnson are still speaking to Palou, not so much for Dixon and Ganassi driver coach Dario Franchitti.

The team meetings remain professional, and at a Thursday night party for Ericsson at Ole Red on Lower Broadway in Nashville, Palou not only showed up but was one of the last drivers to leave. He sat with Johnson and Ericsson, but when Johnson left and Ericsson was being celebrated, Palou was alone on a couch and an obvious outcast at Ganassi's event.

And yet this dysfunction has not hurt the team.

Ganassi has three drivers solidly in the championship hunt, Palou one of them, with only three races remaining in the season.

Dixon's victory not only broke a tie with Mario Andretti for second-most wins in IndyCar history, but it moved him within six points of tying A.J. Foyt for a record seven series titles. Ericsson is 12 points behind leader Will Power of Team Penske in third, and Palou's finish in Nashville moved him one spot in the standings to fifth, only 33 points behind Power.

He's being sued by the team he wants to leave at the end of the season, but Palou does not believe that will prevent him from winning a second consecutive championship.

"I don’t think I’m getting less stuff or not so much attention than others. Otherwise, I would say it, to be honest. Yeah, I think we have a fair shot for sure.”

Palou then pointed to the pre-race team meeting and the message he took away from Ganassi, who told his drivers, “Don’t ever give up."

The Ganassi drivers did not give up during the marathon race Sunday on the downtown street course. Nashville was messy and crash-filled, slowed 10 times and set a series record with 15 drivers failing to finish. No car in the field escaped without damage, and tempers were flaring after the race as Ericsson and Josef Newgarden took aim on Twitter at Romain Grosjean, who in turn was furious with Newgarden.

But it's almost Zen-like inside the Ganassi organization. Even Dixon, who has criticized Palou's handling of his contract situation, expects a clean and conflict-free race for the title.

“We’re here to win,” Dixon said. “Everybody is trying to win. That’s what I’ve always loved about this team. Obviously, this is a strange situation, and it hasn’t changed for Chip. The pre-race meetings are the same, and all of our cars are trying to win this championship.

“I know Alex is trying to win this championship as much as he can. It’s in his best interest to, as it is all of ours. Yeah, some stuff gets a bit awkward here and there, but we’re all here to win. That makes it pretty simple.”

Ganassi has three shots at this title, and while Palou's situation may take months to be decided either in a courtroom or by an arbitrator, the organization won't let it stand in the way of a 15th IndyCar title.

If it's going to be Palou hoisting the Astor Cup for the second consecutive year, he believes he'll need victories in the remaining three races, and he believes the Ganassi organization wants it as much as he does.

“We just need to win, to be honest,” he said. “It’s OK to finish third and fourth and fifth, but we need to win. I’ll need to win the last two races to get a chance. We’ll do the best. We’ll prepare the best we can.”