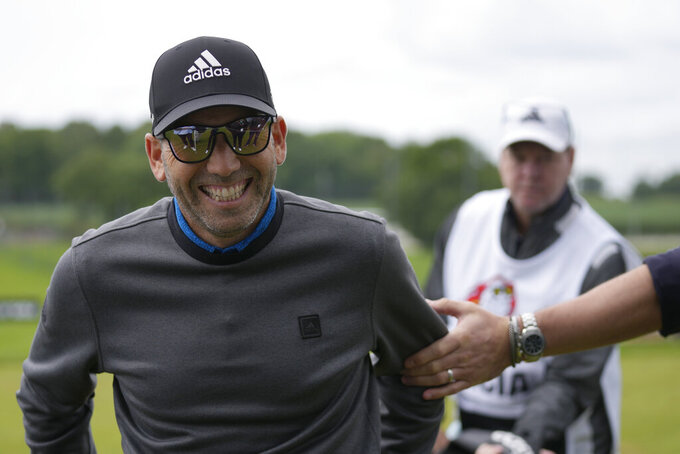 Sergio Garcia of Spain smiles as he walks off the driving range just prior to the start of the first round of the inaugural LIV Golf Invitational at the Centurion Club in St Albans, England, Thursday, June 9, 2022. (AP Photo/Alastair Grant)

Golf is in the early days of a bitter showdown between the established PGA Tour and an upstart series backed by the repressive Saudi regime, which hopes that throwing around billions will help people forget about its appalling human rights record.

If history is any indication, there are unlikely to be any real winners in this battle of the links.

IndyCar is still struggling to overcome an ugly rebellion from the 1990s. The NBA’s growth was undoubtedly stifled by its nearly decades-long challenge from the American Basketball Association. The NHL endured plenty of harsh blows while fending off the World Hockey Association.

It's hard to see how golf emerges in a stronger position from its own civil war.

“I tossed and turned and lost a lot of sleep last week thinking about what could potentially happen,” said Justin Thomas, who has stuck with the PGA Tour but conceded Monday to fretting about the game's future.

“I grew up my entire life wanting to play the PGA Tour, wanting to break records, make history, play Presidents Cups, play Ryder Cups," he went on. "The fact that things like that could potentially get hurt because of some of the people that are leaving, and if more go, it’s just sad. It’s really no other way to say it. It just makes me sad.”

LIV Golf launched this past week with a three-day tournament outside London, presenting itself as an exciting new alternative to the staid ol’ game -- as long as everyone is willing to ignore those who are writing the enormous checks.

For now, the PGA Tour seems to have the clear upper hand, with nearly all the top players staying put, far more exposure through its lucrative television deals, and a longstanding history as the prime destination for any pro golfer.

The new tour has faced plenty of scorn from those who view it as a second-rate organization for over-the-hill and never-were players looking to cash in on riches beyond their wildest dreams.

Rory McIlroy took plenty of not-so-subtle jabs at LIV Golf after his victory Sunday in a compelling Canadian Open, having held off two more of the world’s top-ranked players in Thomas and Tony Finau.

“I think it had all the ingredients,” McIlroy said. “It had the golf course. It had the cast of players that you would want to be up there. It had the caliber of golf. And it had the atmosphere. You had everything this week to have a really top-class golf event.

“It doesn’t get much better than that.”

Of course, McIlroy’s glowing assessment of the PGA Tour event was meant to imply that LIV Golf’s inaugural, 54-hole tournament -- which featured shotgun starts, no cut, neon-colored scoreboards, a team competition, and a staggering $4.75 million prize to the winner -- was lacking all the elements that really mattered.

There was certainly no denying the field in Canada was much more impressive than the one in England, where Charl Schwartzel (the 2011 Masters champion and No. 125 in the world ranking) held on for a one-stroke victory over fellow South African Hennie Du Plessis (ranked 134th).

It was Schwartzel’s first victory on any tour in more than six years.

All snickering aside over the quality of its players, LIV Golf has made some surprising inroads into the PGA Tour’s talent base. Former world No. 1 Dustin Johnson caught everyone off guard by joining the upstart tour. Major winners Bryson DeChambeau and Patrick Reed are coming aboard, too, planning to make their debuts at LIV's first U.S. event in Portland, Oregon, starting on June 30.

And, of course, it was Phil Mickelson who led the way, even after using a derogatory expletive to describe the Saudis and acknowledging they have a “horrible record on human rights.”

Others are sure to follow after seeing Schwartzel win more money in three days than he had in the previous four years.

Mickelson, who received a reported $200 million to sign up with the Saudis, defended his decision again Monday — it's all about the money, if there was any doubt — and held out hope that he would be allowed to play on both tours.

But the PGA Tour is playing hardball, suspending LIV players who didn't voluntarily give up their memberships.

Lefty wants his cake, and everyone else's piece, too.

“I've earned that lifetime membership (on the PGA Tour), so I think it should be my choice,” said Mickelson, whose debunked image as the “People's Champion” has earned its place among the great frauds in sporting history.

How it all shakes out is anyone’s guess, but the IndyCar split in the mid-1990s might provide some useful guidance.

Open-wheel racing had risen to unprecedented heights while governed by CART, but Tony George controlled the biggest event in the series -- the Indianapolis 500 -- and wanted more say in how things were run. So, he launched the rival Indy Racing League and, of course, made the 500 the centerpiece of his new series.

Most of the top teams stayed in CART for several years, but the lure of Indy eventually became too costly to ignore. The leading drivers began migrating to the IRL, which put the more established series out of business in 2008 but emerged in a much weaker position than CART's glory days.

One has to wonder if LIV Golf’s enormously deep pockets and seeming willingness to flush hundreds of millions down the drain to serve the greater purpose of improving Saudi Arabia's image will provide a crucial bargaining chip against the PGA Tour, much like the 500 was in IndyCar war.

Not to mention, if the major championships allow those suspended from the PGA Tour to continue playing in golf’s four biggest events -- which is the case this week at the U.S. Open and will likely be the same at next month’s British Open -- the PGA Tour will look even less attractive to those who can make far more money on the new tour.

In the end, it may not matter if the PGA Tour repels LIV Golf (as the NBA and NHL did when faced with rival leagues) or the upstart tour manages to run the established organization out of business (a la IndyCar).

The NBA and NHL emerged from their challenges with plenty of ugly scars, from huge financial losses to relocated franchises (in hockey's case, two franchises were even forced to merge).

Those wounds eventually healed, but it took a while. Which is more than we can say for IndyCar, which is still trying to clean up the mess left by its split more than a quarter-century ago.

Now it's golf that appears headed down the same, self-destructive path.

Paul Newberry is a national sports columnist for The Associated Press. Write to him at pnewberry(at)ap.org or at https://twitter.com/pnewberry1963