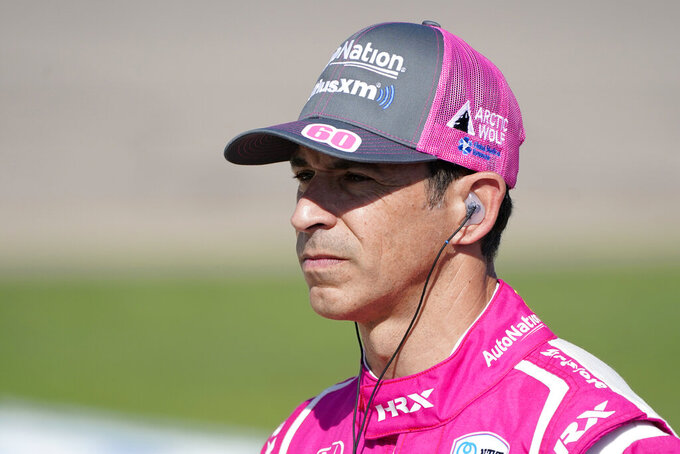 Curtailing that possibility, the team announced a one-year contract extension Friday that will bring Castroneves back for a 26th full IndyCar season. Castroneves won his fourth 500 in 2021 driving a part-time schedule for MSR as Castroneves was desperately fighting off a forced slide toward retirement.

Michael Shank believed in the popular Brazilian and last year's Indy win led to a full season at MSR's expanded two-car organization. Castroneves is now 47 years old, yet insistent he's got plenty of gas in his tank.

“I don't want anyone else to win a fifth Indy 500,” Shank told The Associated Press. “He's very emotional about this, he's going down swinging. I think he'd like to do at least one more (full) year and then maybe try just Indy? And then do some other things, too. He wants to stay involved, he wants to use what he's strong at, and we support him 100%.”

It's hardly been the breakout season Shank had expected when Castroneves' program was expanded into a full season and Simon Pagenaud became available at the same time Jack Harvey, the team's first driver, left for Rahal Letterman Lanigan. Castroneves is 18th in the standings, has led only one lap all year and finished seventh at Indy; Pagenaud is 12th in the standings and was eighth at Indy, and Shank believes will have a strong close to his first season with MSR.

They race Saturday night at Gateway Worldwide Technology Raceway outside St. Louis, where Castroneves has an incredible record. In six career starts spanning both CART and IndyCar, Castroneves has one victory and has never finished lower than ninth. In three IndyCar races, his average finish is 2.3.

It has created hope for strong results from MSR on Saturday night at the final oval on this year's IndyCar calendar. Castroneves has not raced Gateway since 2017.

He has admittedly struggled to adjust to the cockpit-protecting aeroscreen — which was added by IndyCar while Castroneves was competing full-time in sports cars following his nearly two decades with Team Penske — and his results this season have been inconsistent. Shank is planning personnel changes to Castroneves' team.

“I didn’t expect how difficult it was. We are making some changes internally to make sure these last three races, we continue to improve,” Castroneves said. "This aeroscreen literally threw a curveball to find a sweet spot, taking longer than I expected for myself to adapt and to understand what the car needs. But we're pushing. I feel like we could be better.

“But remember, it’s the first full-time season that I’m in. Certainly we’re preparing for bigger things in the future.”

Shank isn't so much bothered by the results because of the value Castroneves brings to the team sponsors. The charismatic Brazilian is an entertainer — he won his season of “Dancing With the Stars” in 2007 — and is a hit at partner functions.

“Let's just put the Indy 500 to the side for a minute, the relationship he's had with our sponsors and our partners is like next-level (stuff) I've never seen before,” Shank told AP. “He is so good with people. Everyone wants him at their events, dinners, meet-and-greets, he's just exceptional. And we have to deliver what our sponsors want.”

Castroneves has no idea how long he'd like to race, but he knows he has no plans to slow down. In addition to his extension with MSR, Castroneves is lobbying for a seat in the Daytona 500 with TrackHouse Racing and its Project91 program. TrackHouse wants to bring international drivers from other formulas to NASCAR and debuts Project91 this weekend with Formula One 2007 champion Kimi Raikkonen.

TrackHouse team owner Justin Marks has said conversations with Castroneves are on pause until the team gets through its debut with Raikkonen. But Castroneves wants to be in the Daytona 500 and anything else he can fit into his schedule; he also participated in Tony Stewart's all-star series for a second consecutive year this summer and his victory in the opener is what led to Daytona talks.

“You can’t put a number on it. I have the potential, the dedication, and I know I can do the results, and have the team and people behind,” Castroneves said about how long he plans to race. "The reason I’m still going for it is because I believe in all these aspects. I’m going to keep moving forward until I get the result.

“Obviously you get to a point that you've got to realize and as of right now, I don’t feel that in my gut. I feel I have a lot left in the tank. The number is just an age.”