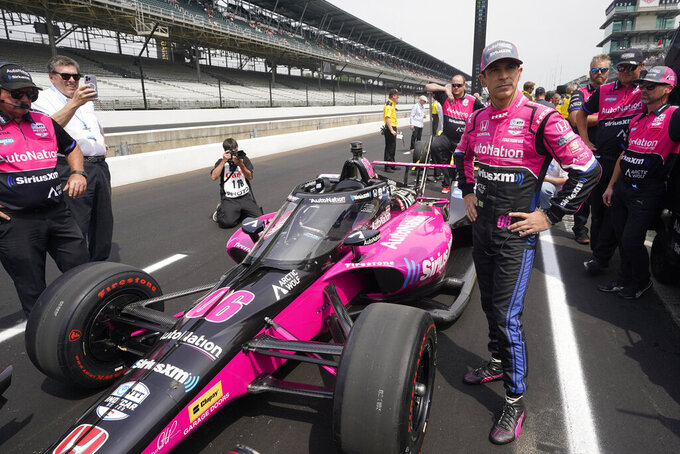 Helio Castroneves, of Brazil, stands by his car during qualifications for the Indianapolis 500 auto race at Indianapolis Motor Speedway, Saturday, May 21, 2022, in Indianapolis. (AP Photo/Darron Cummings) 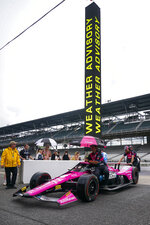 He'd been to the school before, knew he was supposed to park in an alley around back and knew he'd lead passenger Romain Grosjean through a cafeteria door into their appearance. But the carpool line was jammed, so Castroneves slowed his bronze Acura through the school parking lot to wind his way past the traffic.

A speeding hatchback suddenly flashed past Castroneves on his outside and darted into the empty parking spot ahead of him.

“Somebody's in a hurry,” Castroneves chuckled. “Passing only counts on Sunday.”

He will have to pass a lot of cars this Sunday when Castroneves attempts to become the first five-time winner of the Indianapolis 500. The Brazilian joined A.J. Foyt, Al Unser and mentor Rick Mears as the only four-time winners of “The Greatest Spectacle in Racing” last May in a raucous surprise that produced one of the most enthusiastic fence-climbing celebrations in race history.

It took 30 years between Mears' fourth Indy 500 win for Castroneves to join the club. Mears wants him to stick around for a bit.

“I said, ‘You’d better be very careful what you wish for here. If you win that fifth, we’re going to kick you out of the club and you’re going to be all by yourself. Nobody to hang out with. So be careful,’" Mears said.

Sorry, pal: Castroneves has every intention to race for his fifth Borg-Warner this weekend. It will be his 22nd start in the Indy 500, more than any other driver in the field, and that experience proved invaluable last year as Castroneves predicted traffic patterns to use the wake from lapped cars to hold off Alex Palou for the win.

He is back for a second time with Meyer Shank Racing, the team that offered Castroneves the chance to race Indianapolis again when his 20-year career with Team Penske ended. The Indy 500 win last year — the first IndyCar victory for Michael Shank's organization — elevated what was a one-car program into a team expected to challenge for wins every race.

It helped MSR expand and sign Simon Pagenaud, another Indianapolis 500 winner and teammate of Castroneves' at Penske, and Castroneves' exuberant personality has raised the worth ethic of everyone within the organization.

“He has an undying spirit inside him that drives him to do this and he's not done yet,” team founder Michael Shank told The Associated Press. “When he springs out of that motorhome, that's not (fake). That's how he feels. He's excited to get the day going. We want our group to be tied with him in history. I want to be the team that gets him the fifth, and if it doesn't work out this year, then we're going to do it again."

Castroneves is in a one-year deal right now with Shank that the team wants to find a way to extend.

Castroneves turned 47 earlier this month and shows no signs of slowing down. He led the students at his school stop in calisthenics and talked about the importance of what stands in front of him at Indy.

“There is a chance to make history and I want people to understand how important it is,” Castroneves said. “The people here in Indianapolis know, because they know what the Indy 500 means. I don’t think people from the rest of the motorsports world know the position I’m in and I'm here to show them just how important this history is.”

Shank puts Castroneves in the same class of athletes as Tom Brady, who was 43 when he won his seventh Super Bowl.

“Exceptional people never die; there are certain people who have it innately in them to exceed all expectations,” Shank told AP. “Now at some point, the vision is going to give away, right? It is what it is, but in my mind, Helio could probably go for the fifth another four or five times without being too affected by age.”

Castroneves didn't get the qualifying run he hoped and starts 27th on Sunday, and his goal is to have cut the deficit in half and be inside the top 12 by the halfway mark.

“It's not going to be easy, but it's not impossible,” Castroneves said.

He is the second-oldest driver in the field, five months younger than Tony Kanaan, a fellow Brazilian. Castroneves recalled the conversation here ayear ago centered on phasing out veterans in IndyCar's changing of the guard.

Age does not matter at Indy, though.

“I believe that a lot more people understand that this place, people talking about age, that was the theme last year of all the younger generations coming and winning races,” Castroneves said. “Winning last year shows that this place is not about age, it is not about being brave. It is about having experience and using it at the right time. I feel after my win last year, people now look at guys with experience here a lot different than maybe they did.”