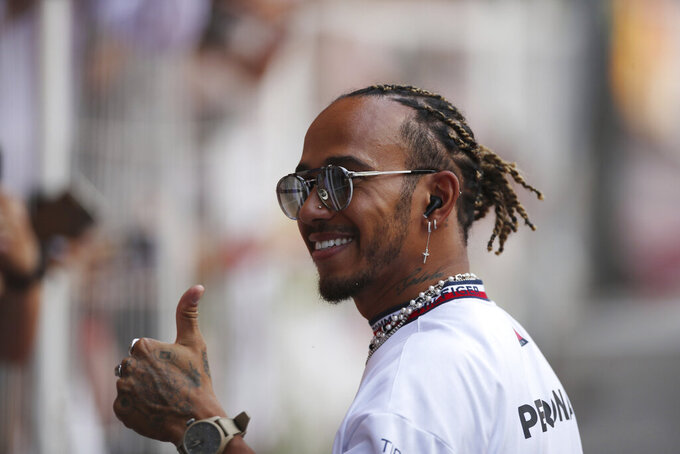 Mercedes driver Lewis Hamilton of Britain thumbs up as he arrives for driver's parade ahead the Monaco Formula One Grand Prix, at the Monaco racetrack, in Monaco, Sunday, May 29, 2022. (AP Photo/Daniel Cole)

Congressman Andre Figueiredo first made the suggestion in November after last year's Brazilian Grand Prix, which Hamilton won at Interlagos. The Mercedes driver carried a green and yellow flag on his victory lap and at the podium to celebrate with local fans.

“Speechless. Today I was granted honorary citizenship to one of my favorite places in the world,” 37-year-old Hamilton said on Instagram, posting pictures of himself with the Brazilian flag. “I don’t really have the words right now. Thank you Brasil, I love you, I can’t wait to see you again.”

Hamilton has many fans in Brazil due to his F1 racing and his respect for three-time world champion and local hero Ayrton Senna, who died in an accident at Imola, Italy in 1994.

Hamilton, who lost the 2021 drivers' championship to Max Verstappen on the final lap of the season, is struggling this year. He is in sixth position with 50 points ahead of this weekend's Azerbaijan Grand Prix, the eighth race on the calendar.