AUTO RACING: Road courses ahead for NASCAR, F1 and IndyCar 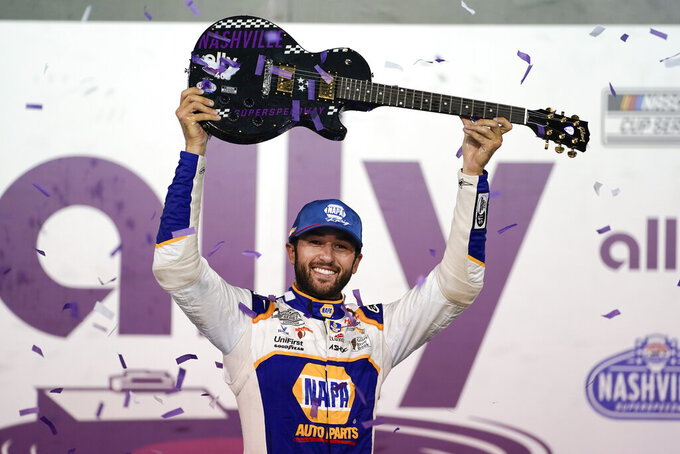 Last race: Elliott rallied from 25th after 120 laps and pulled away on a restart with four laps to go to win at Nashville, his second victory of the season.

Fast facts: The Joe Gibbs Racing trio of pole-stter Denny Hamlin (114), Martin Truex Jr. (82) and Kyle Busch (54) combined to lead 250 of the 300 laps at Nashville, but late-race traffic relegated Busch to 21st and Truex to 22nd. ... Kurt Busch finished second, followed by Ryan Blaney, Kye Larson, Ross Chastain and Hamlin. ... Elliott became the fifth multiple race-winner through 17 events. He leads Chastain by 30 points and Blaney by 31. ... The race was delayed twice by lightning with the second delay lasting more than 2 hours.

Last race: Justin Allgaier led five times for 134 laps, won both early stages and coasted to victory at Nashville, his second victory of the season.

Fast facts: JR Motorsports drivers have won five of the last seven races, and Chevrolet has won all seven. JRM also has won 12 consecutive stages on oval tracks. .... AJ Allmendinger, already a two-time winner on road courses this season, remains the series points leader by 25 over Ty Gibbs and 32 over Allgaier. .... Allmendinger's 16th-place finish was just his second outside the top 10 through 15 races. ... The top five in points have all won at least twice. ... Allgaier has led a series-best 462 laps.

Last race: Ryan Preece pulled away on a restart with 10 laps to go, then held off challenges from Zane Smith and Carson Hocevar to win at Nashville for the second year in a row. His two victories have come in just eight career starts.

Last race: Defending series champion Max Verstappen won from the pole, his fifth victory in six races and sixth overall, in the series’ return to Canada after a two-year hiatus because of the pandemic.

Fast facts: Verstappen and Red Bull teammate Sergio Perez have combined to win seven of the nine races run so far, and stand 1-2 in points. Perez is 46 behind, and Charles LeClerc of Ferrari — the winner of the other two races — is 49 behind. ... Hamilton, the seven-time series champion, is sixth in points.

Last race: Newgarden won at Road America, his third victory this season, and claimed a $1 million bonus for winning on an oval, street circuit and road course.

Fast facts: Indy 500 champ Marcus Ericsson leads Will Power by 27 points in the standings and Newgarden, the only multiple race winner through eight events, is 32 behind. .... The top three, and fifth-place Alex Palou, the defending series champion, have three top-three finishes. ... There have been eight different pole winners.