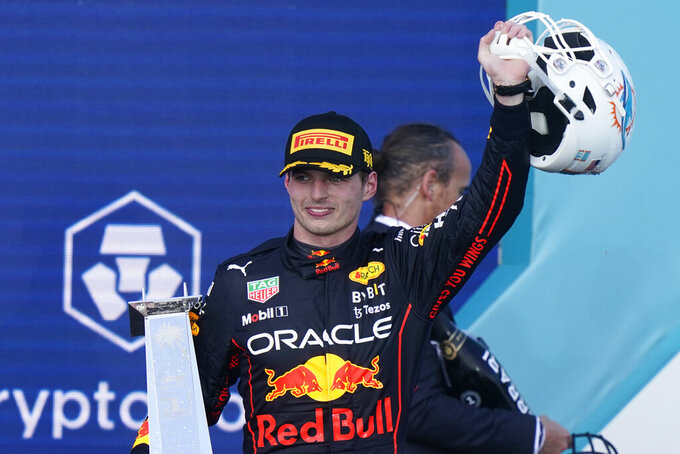 Red Bull driver Max Verstappen of the Netherlands, winner of the Formula One Miami Grand Prix auto race, holds his trophy and a Miami Dolphins' helmet at the Miami International Autodrome, Sunday, May 8, 2022, in Miami Gardens, Fla. (AP Photo/Lynne Sladky)

Last race: Joey Logano used a bump-and-run to ease leader William Byron out of the way on the next-to-last lap and won at Darlington, ending a 40-race winless streak.

Fast facts: Logano became the 10th different winner through 12 races. He also extended to 11 his streak of years with at least one victory. ... Byron and Ross Chastain are the lone two-time winners. ... Chase Elliott now leads Byron and Ryan Blaney by 65 points. Logano is fourth, 79 points back, with Chastain, Busch and Martin Truex Jr. all 89 behind. ... The race will be followed by the non-points all-star race at Texas, a virtual one-week break from the championship battle at the regular season midpoint for the premier series.

Last race: Pole winner John Hunter Nemechek held off Carson Hocevar by 0.552 seconds in overtime at Darlington to earn his first victory of the season.

Fast facts: Nemechek became the sixth different winner in seven races this season. Zane Smith is the only two-time winner. ... Nemechek jumped to second in the points race, 30 behind Ben Rhodes. Chandler Smith is 32 back. ... Zane Smith all leads all drivers with 6 top-10s, but is fifth in points, 42 back.

Last race: Max Verstappen passed both front-row Ferraris as he went from third to first in the first nine laps and cruised to victory in the series' first race in Miami. His third victory in five races to start the season also closed him to within 19 points of leader Charles LeClerc in the standings.

Last race: Pato O’Ward passed VeeKay on the outside after pit stops for tires at Barber Motorsports Park and won for the first time this season.

Fast facts: O'Ward was the first driver outside the Team Penske tandem of Scott McLaughlin and Josef Newgarden to win this season through four races. Newgarden has won twice. ... Defending series champion Alex Palou leads all drivers with three top-three finishes and leads McLaughlin by three points and Newgarden by nine for the standings lead.

Next race: May 29, Indianapolis, Indiana.

Next event: May 15, North Dinwiddie, Virginia.

Next events: May 13 and May 14, Mechanicsburg, Pennsylvania.